No affordable housing in four high rise developments, with 4,755 bed spaces, being decided on by reinstated Planning Committee 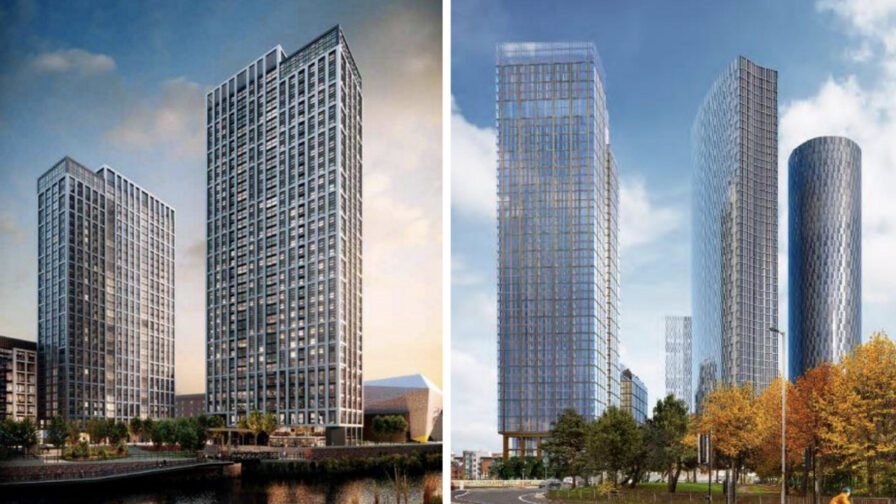 Manchester City Council’s full Planning Committee returns and four huge developments are on the table. Co-living towers, some of which breach national guidelines on livable space and two 51 storey skyscrapers with no affordable housing, are to be decided on.

Manchester City Council’s Planning Committee sits again on 30 July tasked with signing off on property development deals, worth £854 million, which are set to form a new layer in Manchester’s increasingly crowded skyline.

Among these developments are a series of “co-living” blocks. Now a common feature in cities like San Francisco and New York where rents have skyrocketed, co-living spaces have sprung up offering smaller living space, alongside communal areas and services, claiming to make city-centre rents “more affordable”. Co-living developments have come under criticism by housing campaigners who claim they are profiting of the housing crisis rather than creating solutions to it.

None of the proposals for Manchester include affordable housing, or pay planning fees for building affordable homes off-site.

Developers Downing Living have proposed a 2,224 bed co-living scheme at First Street near Hulme consisting of four blocks ranging from 10 to 45 storeys. The development is valued at £301 million and Downing plan to turn a profit of £45m.

The Vita Group in partnership with Manchester Quays and Union Living have plans for two more 32 and 36 storey co-living blocks near the The Factory culture hub. Consisting of 1,676 bed spread over the two towers. The developments together are valued at over £222 million.

A further proposal by Renaker plans two 52 storey residential towers between Deansgate and Mancunian way. Accommodating 855 apartments and a 389 space basement car park, the development is valued at £331 million

With £854 million of development to be decided in Deansgate Ward alone, concerns about the co-living model have been voiced by local councillors Marcus Johns and William Jeavons:

“The combined 3,900 bedspaces across the three city centre co-living applications would represent 23% of the 2018 population of our ward. As an untested concept in our city, that is not a cautious approach. We fear they will undermine our ongoing efforts to build an engaged, long term city centre community.”

This will be the first time the full planning committee will get a say in development since it was suspended in March due to the lockdown. Emergency powers had previously been delegated to the council’s planning executive Joanne Roney who passed a series of controversial proposals despite protests from councillors and local residents.

Concerns about Co-living in City hall have been long running, a report released in December 2019 highlighted how the new property product was “… new and untested in the Manchester housing market.”

The report subsequently recommended that “it is not considered appropriate to approve a significant level of co-living accommodation.”

This about turn coincided with a series of large co-living developments moving up for planning approval in the same month. Campaign group Greater Manchester Housing Action have said co-living experiments are a “step towards slums of the future” and that. “Concerns remain about the living conditions of tenants in such schemes and the long-term impact on local communities.”

Co-living developments occupy a poorly regulated gap in planning law. “Sui Generis” or “unique” developments do not conform to standard housing classification so appear to be given leeway when it comes to meeting basic planning regulation guidelines.

This includes benchmarks like the Department for Communities and Local Governments Nationally Described Space Standard (NDSS) which outlines minimum floor space for liveable accommodation. Manchester City council has adopted the NDSS guidelines. But the fact that the size of many of the flats in these proposals fall below the NDSS standard, has not prevented the councils planners from approving these proposals for consideration by the Planning Committee.

Helping developers navigate this poorly defined territory are Deloitte, the planning consultancy and auditing firm, which was recently handed a £15 million fine for “serious and serial failings” in its auditing of technology company Autonomy.

Deloitte is seen as the council’s favoured planner for city centre developments. According to research by Place North West, the company was found to have advised on 80% of large-scale planning applications and development frameworks in the city centre. The firm also benefits from the experience and connections of Sir Howard Bernstein, a previous council chief executive who joined the firm in 2017.

The largest development set to go before Manchester’s planning committee is a two, 224 bed co-living developments consisting of four 10 to 45 storey towers to occupy undeveloped land near First Street and Mancunian Way.

The developer Downing Living is advised by Deloitte Real Estate while the proposal was designed by Manchester regular Simpson Haugh, responsible for more than a dozen major projects across Manchester including the Beetham Hilton Tower.

The development consists of 1,349, one-to-five bed co-living apartments. Alongside these are 875 studio apartments which make up 37% of the proposal. Ranging from “compact” 18 m2 rooms to “deluxe” 30 m2 options. Studios within the development are significantly smaller than the NDSS and council’s own residential space standards, which state that 39 m2 is the minimum liveable area recommended for a one bedroom (one bed space) home with a bathroom.

Downing Living accepts that its studios “do not comply with approved space standards, they would not be acceptable as permanent homes”. Tenancies in these are proposed to be restricted to six months. The development is aimed at:

“Young workers, new graduates … with incomes which are not (yet) sufficient enough to afford the increasing city centre rents of traditional private rented apartments.”

The development includes no rooms for affordable rent (commonly rated as at least 80% of market rent) or financial contributions to housing off-site. It does include £3,189,00 contribution for off-site public infrastructure improvements such as pavements and landscaping around the development.

Downing has claimed that new residents attracted to Manchester will provide a council tax receipt of upto £1.8 million a year. However a council planning report  states that the developers have provided no proof of this: “There is no clear evidence submitted to support the contention that direct council tax revenues will benefit.”

A viability report produced by Cushman & Wakefield values the First Street development at £301,410,000. After construction the property with be sold to investor purchasers as a rental product. Projected revenues are redacted from the report. Downing Living expects to net a 15% profit of £45,211,500.

Union T1 has no affordable housing

Eighty percent of 870 bed spaces in T1 will be “single occupancy”. The development is aimed at recent graduates and young professionals. Alongside multi-bed apartments T1 includes 180 one-bed studios. Ranging from “compact” (16 m2 floorspace)  to “deluxe” (26 m2) options, which are  23 m2 or 13 m2 smaller, respectively, than the  NDSS guidelines of 39 m2 which state the minimum of liveable space recommended for a one bedroom (one bed space) home with a bathroom.

The developers proposal highlights that the studios “would not be acceptable as permanent homes in Manchester and tenure lengths should be restricted.” Maximum tenures of six months will be applied, though this appears to leave open the possibility of operators offering repeated short term contracts. Meanwhile larger multi-apartment flats which also breach minimum space standards will not be restricted and can be rented for longer terms.

A redacted viability report, written by Deloitte and published just two days before the planning committee values T1 at £120,860,523

After construction the tower will be sold to investors as a rental product. Deloitte predicts net rental revenues (with cost subtracted) of £5,295,191 per year while Manchester Quays reserves a 15% profit of £18,129,078.

The second co-living development on Water Street, proposed by Union Living Limited (also a Vita Group company) and advised by Deloitte is “Union T2”, a 36 storey 806 bed co-living tower. The development will offer 186 3-4 bed co-living apartments and 186 studios for short term lets. The building will include ground floor communal lounges and co-working spaces for residents.

Studios range from 17 m2 to 31 m2 of floor space, all of which breach NDSS guidelines by up to 22 m2. As a concession these studios, like those in T1 are restricted to contracts of less than 6 months.

Union T2 includes no affordable housing or planning contributions for local amenities or affordable housing elsewhere. Vita Group intends to voluntarily provide a portion of flats, 20% of the total beds (161 en-suite rooms), to be rented at a more affordable rate, comparable to 80 percent of the standard market rate. There is no legal obligation for them to follow through on this.

After construction the tower will be sold as a rental product to investors. Deloitte predicts net rental revenues of £4,954,645 per year while Union Living Limited collects a 15% profit of £18,315,938.

Renaker reaches up into Manchester’s skyline

Ancoats-based developer Renaker, with consultation by Deloitte Real Estate, have submitted plans for two 52 storey skyscrapers on Silvercorft and Cross street between Deansgate and Hulme.

The two towers dubbed “The Blade” and “The Circle” were designed by Simpson Haugh, the Manchester based design firm responsible for Renaker’s nearby Deansgate Square development which involved four residential towers – 67, 53, 47 and 40 storeys tall.

Together the blocks plan to host 855 apartments providing a mix of mostly one and two bed apartments. The inner-city development will also host a 244-space residents car park and a three-level basement car park providing 389 spaces.

The development’s consultation attracted objections from local residents that it’s size would damage the character of Hulme and Castlefield. Other complaints highlighted that its shared amenities such as a gym, sauna and pool would not be available to the public while new residents would put more pressure on stretched local amenities such as GPs and community services.

Deansgate councillors Marcus Johns and and William Jeavons also raised concerns about the sustainability of Co-living developments in light of ongoing Covid-19 transmission.

“We estimate that over 1,200 of the units proposed will be smaller than minimum space standards–some as small as 18 sq m for an entire apartment. This is unacceptable.

“The solution to these ridiculously small spaces is not to restrict tenancy periods, but to build homes that meet space standards. Given our recent experience with the Covid-19 related lockdown, we are deeply concerned of the impact specifically if future residents ever had to lock down or self isolate again.

“Indeed, there is question if co-living is even desirable or safe in the world of Covid-19 and social distancing. No one knows how long these measures will need to last to keep people safe and what changes are permanent.

“The specific proposed development at First Street includes a 45-storey element, which is far too tall and would have a severe impact on neighbouring communities and listed buildings. It is egregious and unnecessary overdevelopment on a site which already has planning permission for viable residential development.”

The Planning Committee will decide on the developments on Thursday 30 July at 2 pm.