By Guest Writer | 9 July 2020Friends of The Meteor 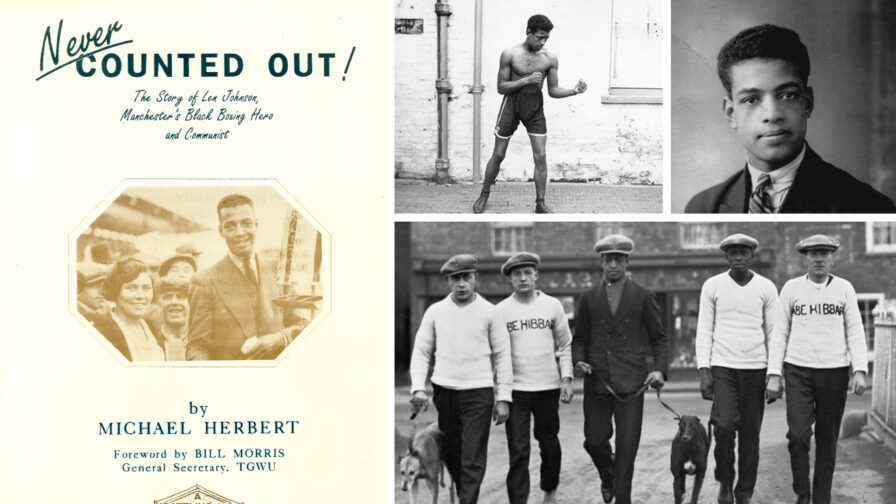 When my parents moved to Clayton, a working class suburb of Manchester in 1963, it was a large sprawling council estate surrounded by engineering and manufacturing factories and dominated by two busy main roads, Ashton New and Ashton Old Roads. The population was very white working class with a small Irish community that had lived there for many years.

It had a radical edge due to some of the people who lived there including Harry Pollitt General Secretary of the Communist party and   communist activist and co-founder of the WCML: Eddie Frow.  It was Eddie who encouraged my partner, Michael Herbert to write about another less-known Claytonian, communist and boxer Len Johnson (1902-1974).

Eddie and Ruth had known Len through the CP and were keen that his life should be written up.  By this time, Len was dead, but some of his family, boxing pals, and comrades were still alive so it was an opportune moment to record the life of a much loved and important member of the Manchester radical family.

Over ten years, whilst he was also working full-time in Manchester City Council, Michael dug deep into the archive that the Frows had produced on Len as well as newspaper archives and most importantly interviewing Len’s friends and family. Unlike many working class activists Len did not write his own biography but Michael was able to access a document that Len wrote about his life for the “Boxing News.”

Michael really did not like boxing but his research put it into context; it was one way that working class men could make some money and get out of the poverty many of Len’s generation experienced.

Len was from a mixed race family. His father was , William  “Billy” Benker Johnson, a ship’s engineer who originally came from Sierra Leone. Billy took up boxing to earn a living and through this he met Len’s mother, Margaret Maher. Len described her as “Irish and proud of it” but she was going to need that tenacity as throughout her life she would experience racism and prejudice for marrying a black man.

Margaret would have to find lodgings, by herself, and then bring Billy along, hoping that they would not be chucked out by the landlord. She was attacked by other women and her face was permanently disfigured by it. The family found lodgings in 12 Barnabus  Street, Clayton and made  good friends there  a bricklayer called Sal Connell and his wife.  They became Margaret and Len’s family.

Len had two brothers, Albert and Billy and one sister called Doris. The family moved to Leeds for Billy’s work in the boxing booths. By 1914 the family were back in Clayton and living with the Connells.

Len left school and got a job as a moulder in a foundry carrying two hundred weight shanks of white-hot metal.   At this time, Len and his brother Albert, were taken by their father Billy  to the boxing show at the Alhambra on Ashton Old Road which led to Len taking up boxing as a career which he pursued for the next twenty years.

Len’s career in boxing, as Michael shows, was blighted from the first time he set foot in a boxing ring. “The official racism directed at Len Johnson and other black boxers was intimately linked to Britain’s role as an imperialist world power in the nineteenth and twentieth century’s.”

His career involved beating opponents up and down this country and defeating the European middleweight champion. But because, he was black,  he was denied proper title fights and  he became disillusioned as well as suffering ill health.  He gave up boxing in 1933.

Len became a local hero in East Manchester. One of his neighbours,  Mr.Green, remembered: “We would gather around the door awaiting his emergence to enter the waiting vehicle and his appearance never failed to bring a tumultuous welcome. He was so gentle and friendly and never failed to acknowledge the adulation so bestowed upon him.”

After the Second World War Len became a driver of buses and lorries. He was now married to Maria Reid and her three children. And when Maria’s sister died she and Len adopted her three children. One of them, Brenda, forty years later remembered Len. “When I think back, it took a black man to take three children that our own father didn’t want to know and he was a white man. …I loved that black man, I really did. He was one hell of a guy. I can’t put my feelings into words.”

The family now lived at 10 Bold Street, Moss Side. Len joined the Communist Party of Great Britain towards the end of the war and remained a member to his death.

Like many working class people of that era, Len probably turned to the CP, because of his own experiences,  as a black man, as a person who could see the way in which society discriminated against working class people including poverty, unemployment and of course the bigger political picture of the Spanish Civil War and  the rise of Nazism. The CPGB was very active on all these issues and was very attractive to people like Len. He also found like-minded comrades in Syd Booth who had fought in the Spanish Civil War and Wilf Charles another CP activist.

Len became friends with Paul Robeson, actor, singer and communist.  “I was at another of my “fed-up” phases when I was introduced to him one day in Manchester….Paul Robeson put new life in me with a few words. He drew me a picture of his fight for recognition. He pointed out that my job was fighting, and that I could fight in the ring I ought to be able to fight outside it.”

He was active in the CP until the late 50s – over ten years. Through the Pan African Congress in Manchester he made contact with black radicals from Britain and across the world.

Len stood for the Council six times in the Moss Side area of Manchester 1947-1962. He was never elected but at that time it was a Conservative seat.

With his friends, Syd Booth and Wilf Charles he set up the New International Society, of which Len was the Secretary. The Club was at 28 Ducie Street, Moss Side. Not just a social club it took up campaigns including challenging racial discrimination – one was a separate queue for black men at the local  Labour Exchange. Social events included a successful Irish Easter Rising social. Links were also made with international campaigns and lectures and educational meetings were an important part of the Club’s activities.

When Michael went out and discussed his research with Len’s family, friends, boxing and political comrades many of them commented on what a gentleman and gentle man he was.  Len did not have an easy life but he was and still is an inspiration to people today.

Michael’s biography of Len is; “Never Counted Out! The story of Len Johnson, Manchester’s Black Boxing Hero and Communist”.  Buy it for £4.95 here

You can sign the petition to support a Len Johnson statue here.