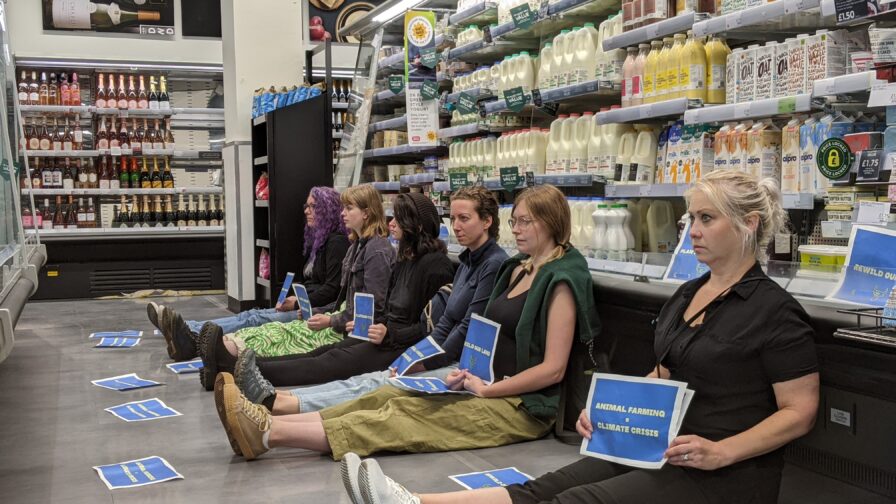 Animal Rebellion staged a protest against dairy products at a supermarket in Manchester last weekend. Alex King spoke to them to find out more about their campaign.

And with scientists concluding that avoiding meat and dairy products is the single biggest way to reduce your environmental impact on the planet, it’s not hard to see why.

Animal Rebellion, an offshoot of Extinction Rebellion focusing on the environmental harms of animal agriculture, launched a new campaign against dairy this month.

It’s making two demands: that government support farmers and fishing communities to transition toward a plant-based food system, and that it rewild farmland to restore wildlife and draw carbon out of the atmosphere.

The group kickstarted the campaign with sit-ins at supermarkets in five UK cities on Saturday – including Manchester – by blocking shoppers from reaching milk and dairy aisles.

We spoke to some of the activists on the sit-in in Manchester.

Why have you come down today?

“It’s been a thirty-year journey. I became a vegetarian as a child and vegan as an adult. Originally it was an animal rights issue for me.

“I never considered myself an activist. I just thought I’d do what I thought was right and as long as my conscience was clear then that would be enough.

“But more and more, it became obvious that this is a climate issue and a human health issue too. All three tie in together. A day doesn’t go by where you don’t put the news on and there’s some sort of disaster happening somewhere. If it’s not a wildfire, it’s a flood.

“Why are we still buying into this narrative that dairy is good and meat is good? We need to do something now.”

What is a plant-based system?

“There are so many benefits of a plant-based system. Plant-based protein requires a fraction of the land needed for animal-based protein. That would mean less deforestation. Methane is a much more potent greenhouse gas than CO2 ever was.

“It’s important to say that we need farmers. This is not an anti-farmers movement. We need farmers to produce plant-based, nourishing, healthy food.

“I would call for a rapid cessation of subsidies for the meat and dairy industry. And then divert that into upscaling of plant-based agriculture.”

Why are you here today?

“We’re here protesting because we want to make the public aware of the link between dairy and climate change, and get the conversation started. That’s the main reason we’re here. To be peaceful and to share the message.”

How long have you been an animal rights activist?

“This is my first time doing proper in-person activism. I do a little bit of activism online. I share pictures and videos pretty much every day. I’m constantly trying to make people aware and to have the conversation. I’ve had lots of people say they weren’t aware of certain things I’ve made them aware of. I’ve made some people go vegetarian. I’ve made people try new vegan restaurants and vegan food.

“I’m also sharing my vegan food on Instagram. Sometimes I just ask people what their favourite food is and I try to find the best vegan version of that. I’m on the hunt for some really good vegan salmon to impress my mum.

“But this is my first time doing activism in person. I was really inspired by the talks from Animal Rebellion at Vegan Campout in July. It really moved me.”

Is this aimed at consumers, businesses or the government?

What are you trying to achieve with this action?

“We’re not after individuals. We’re trying to make a bigger statement. It’s to raise awareness of the whole campaign really. Without doing these sorts of actions no attention gets drawn towards it.

“We want the government to help farmers transition to plant-based foods rather than just asking them to drop dairy and to leave them without any income.”

What can individuals do?

“You can write to your MP and ask for systemic change and take it to the government.

“Signing petitions always helps; when they get 10,000 signatures the government has to respond, 100,000 they have to be debated in Parliament. Also backing the plant-based treaty online.”