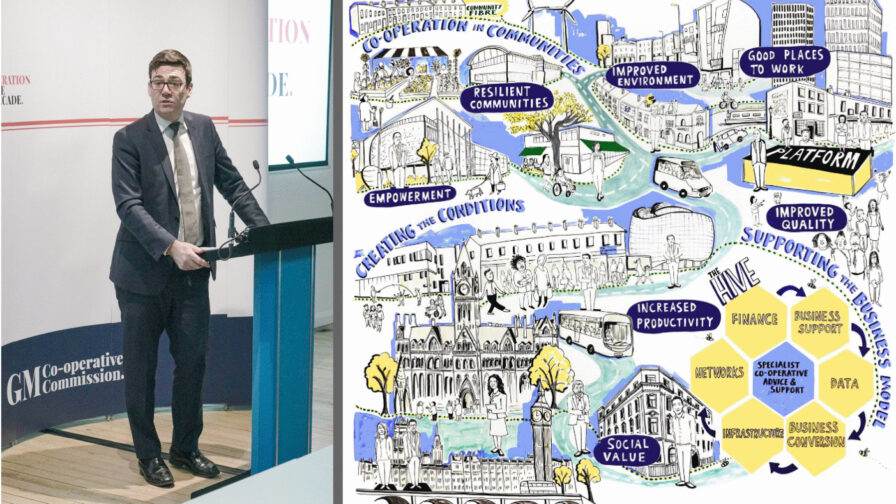 Making progress on his previous promise to make Greater Manchester “the most co-operative region in the UK” Andy Burnham releases the report to turn that plan into a reality.

Mayor Andy Burnham announced plans to turn Greater Manchester (GM) into a designated ‘Co-operative Zone’, with dedicated resources to offer business advice and support for new and existing co-ops in the city-region. The plan was revealed at the launch of a report entitled ‘A Co-operative Greater Manchester’ at Federation House in Manchester on Monday.

The report is the result of Burnham’s involvement with the Co-operative Commission, which began in February 2019 to act as “a driver for developing co-operative activity across the city-region and to explore how co-operative methods can help to solve existing issues facing the city-region.”

The Commission is chaired by Cllr Allen Brett and vice-chaired by GMCA Portfolio Lead and Deputy Portfolio Lead for Community, Voluntary and Co-operatives Cllr Angelika Stogia. It gathered evidence from groups and individuals with experience of running, setting up or trying to set up co-operatives across four key areas: Housing, Transport, Digital and Business.

Greater Manchester is the birthplace of the co-operative movement of today, with the establishment of The Rochdale Society of Equitable Pioneers in 1844. Yesterday’s event paid tribute to that fact with a poem from Manchester poet Tony Walsh which spoke of “love” as the Rochdale Pioneers’ “greatest dividend.”

For transport, the report advises that GM should “carry out a place-based pilot programme for the development of community-owned ‘total transport’ business models” and that “community transport link up with shared modes and the mainstream network as part of the ongoing work around bus reform.” One recommendation suggests the development of a co-operative taxi app for Greater Manchester.

Andy Burnham, speaking at Monday’s launch, appeared keen to move into the implementation of the recommendations set out in the report. Describing the report as a “blueprint….that we can now use to make good that vision of Greater Manchester driving the new economy in the 21st century,” he went on to say:

“I accept all 42 recommendations made in the report and I’d like to keep the commission on to now deliver an implementation plan, in order to make a reality of these recommendations.”

Burnham noted precarious and substandard housing, problems in our social care system and the recent fire in a student accommodation building in Bolton as examples of market failure in Greater Manchester, signalling a need to move towards a “future economy of the 21st century”, using the ‘A Co-operative Greater Manchester’ report as a roadmap to make this new economy a reality.

The full report and more information about the commission and co-operatives in Greater Manchester can be found here.