Have your say on Manchester’s statues and monuments – do they do the city justice? 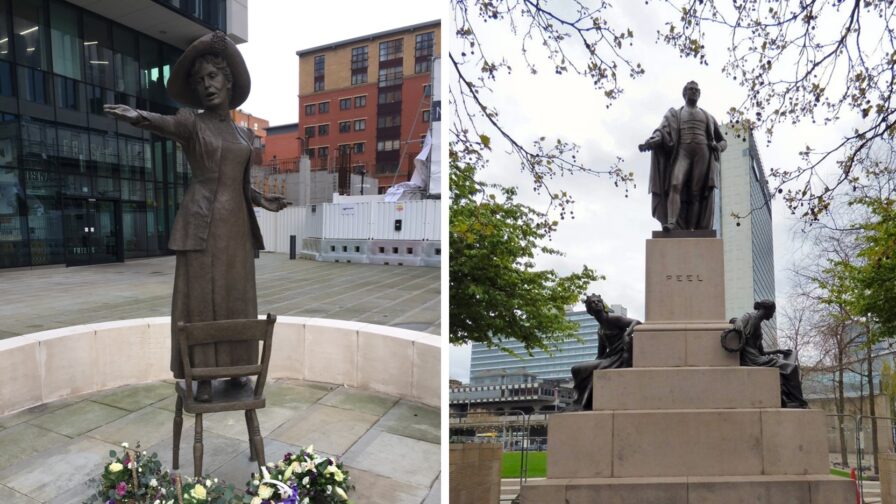 There are five days left of the public consultation into Manchester’s monuments, statues and other public realm adornments. Katy Preen takes a look at what makes a monument and what matters in our public spaces and reports on the Manchester Histories public event to discuss the issues.

Go outside in the city centre and you will see monuments wherever you are. You might pass many of them by without a glance, or you might not even think of them as monuments. But they are all there, each telling a part of Manchester’s story. Now you can give your views on how the city can use them to best represent its history.

Manchester City Council is seeking local opinions on our monuments, statues, memorials, plaques and place names as part of a review into our public spaces, and there’s just a few days left to respond.

On 10 March, I attended a public discussion set up by  Manchester Histories with  Prof. Alan Rice, youth worker Kerin Morris and Prof. Gary Younge to talk about the process and decision-making in how Manchester is represented through its monuments and streetscape. Each speaker gave a short talk on their perspective of what Manchester has, and what it needs, from its public realm.

While recent headlines claim there is a concerted campaign by “hard left and foreign activists” that are trying “to topple British history”, the truth, at least in Manchester, is more nuanced. Younge spoke regarding the removal of statues: “it is not a sign of precociousness, but of maturity”.

Younge went on to say, “I think we have to be aware of the limit of what can be done in public space,” and that we do not need to celebrate social ills, like racism, by retaining monuments that are no longer appropriate.

Societies and communities have always reviewed and replaced parts of their surroundings as their needs and values change, and Manchester is no different. The city has many older statues dating from the 19th and early 20th Centuries, which we may no longer see in the same way as originally intended.

When it comes to what we think of as a monument, our ideas are informed by the existing examples of which there are many, and they are all of a similar type. “I think that people have to be careful when it comes to monuments and statues… They are some of the most conservative forms of art available”, said  Younge. That’s true for some of Manchester’s statues, including some of the more recent ones created in the style of older monuments, such as the Pankhurst and Engels statues. But those two examples are situated in modern surroundings, and integrated into sites used by 21st century people. They have been made relevant by careful planning of the wider space, rather than considering them as objects devoid of context.

Monuments do not all have to follow the same style. Traditional statues may take the form of a likeness on a plinth, but modern examples include things such as murals, lighting displays, and the embodiment of an idea rather than a tribute to a named individual. They can be permanent, temporary (like CowParade and Bee in the City) or rotated (like Trafalgar Square’s 4th plinth).

Reviewing our monuments isn’t just about the figures represented, but the way the city has evolved around them. Piccadilly Gardens now has Queen Victoria staring straight at Nando’s restaurant, while James Watt, Robert Peel and the Duke of Wellington observe the queue for buses at the end of Oldham Road. Originally these statues stood in the grounds of the Infirmary on Lever’s Row, which was demolished in 1914.

Everyone knows Victoria, but would you have been able to identify the other three statues if I hadn’t just told you who they were? What about other statues across the city? For example, could you tell me where John Dalton’s statue is? It’s on Chester Street, within the MMU campus, for those who don’t know. Can you name any of the statues in Albert Square (apart from the Albert Memorial, obviously)? Thousands of us walk past these monuments every day without even thinking about them.

One can also look down at their feet in the Northern Quarter and see Lemn Sissay’s poetry immortalised in the paving, or take a stroll through Collyhurst and follow the walking routes laid out by painted markers on the tarmac. It really is everywhere we look.

Our buildings, too, tell the stories of Manchester’s history, with many examples of Industrial Revolution-era structures remaining in the city centre. While we spend most of our time at ground level, looking up at what is above first floor on our historic streets you can see beautiful details incorporated into the facades, ranging from the Redfern Building’s Art Deco exterior (overshadowed by its imposing neighbour the CIS Tower), to the old Royal Eye Hospital’s relief of Jesus healing the blind.

There are also more recent structures, such as the Beacon of Hope and the Alan Turing statue in Sackville Gardens. Cross over Whitworth Street and walk into the University of Manchester campus, and you’ll find Archimedes, a bottle of Vimto, and many science-themed artworks from the insulator family to The Generation of Possibilities.

Another area of change and renewal is Stevenson Square. Artworks on the walls and shutters are painted over and replaced with something new every so often, like many of the surrounding surfaces in nearby streets. We also see permanent murals, like the 22 bees on the side of Koffee Pot, and the deserted, and soon-to-be demolished, walls of New Cross. Get a look while you still can.

Outside of Manchester, one example of taking existing monuments and updating their story for a modern audience, is the Lancaster Slave Trade Abolition and Fairtrade Trail, which incorporates over 20 existing sites and explains their link to the Transatlantic slave trade. No monuments were removed, and no history was rewritten, but we gain something new from this additional information.

Manchester has yet to reckon with its role in slavery, which is incredible for a place once nicknamed “Cottonopolis”. Perhaps that is something which could be reflected in the way we engage with our existing and new monuments. For as Rice noted at the event on 10 March, “there are these voices there, you need a lot of effort and energy to get to them… There are black histories, there are working class histories, women’s histories.”

And for anyone concerned with so-called cancel culture, the idea that British heritage is being overwritten by politically-correct censors, Rice reminds us of the history of cancellation: “We talk a lot about ‘cancel culture’; it seems to me that cultures have been cancelled for centuries”. Of course, there are those with more power to cancel than others, hence the rediscovery of so much of Britain’s untold history.

Gary Younge opened his talk with a series of slides showing the toppling of statues. “It’s not new, it’s not confined to any ethnic group or country” he explained, which was evident from the sheer number and range of examples. When we think of Edward Colston’s toppling and subsequent early bath in Bristol harbour, did we stop to compare it to the toppling of the statues of Hussein, Lenin or Hoxha?

Erecting statues is political and historic, and so is taking them down. We are making new history when we replace them, and the history that went before is not wiped from our collective memory, but reconsidered in the light of new knowledge.

Our monuments reflect our past, and our present. But what do we want that to look like? This consultation gives us the chance to have our say, but you’ll have to be quick as the survey ends on Monday 22March.

Karen from Manchester Histories and Kerin Morris were interviewed by Alex King after the consultation event, their interview will be published tomorrow.

To take part in the online survey into Manchester’s public realm adornments, that is running till 22 March 2021 – click here