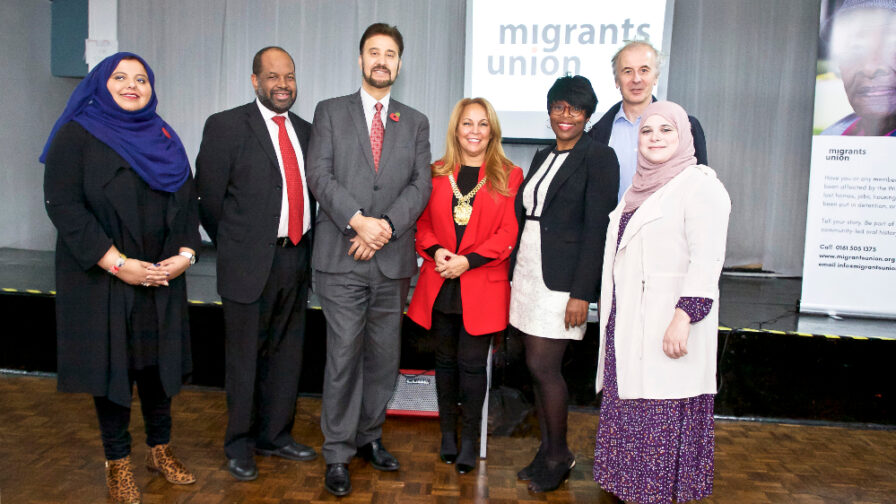 The “hostile environment” immigration policy of the Home Office has blighted the lives of many people it has affected. The Windrush Wonders Oral History Project aims to raise public awareness of these stories of abuse by recording and publishing them.

A project launched last Thursday in Moss Side will record the effects of the Home Office’s “hostile environment” on African and Caribbean people living in and around Manchester, was launched last Thursday in Moss Side. Speaking at the event were Gorton MP Afzal Khan and Manchester DJ Owen Hainsley, whose story made the national headlines this year when he was detained in an immigration detention centre. His deportation to Jamaica, a country he hadn’t set foot in since the age of four, was stopped due to vigorous campaigning on his behalf.

The Windrush Wonders Oral History Project aims to record the stories of those adversely affected by the controversial ‘hostile environment’ policy fully adopted by the Home Office in 2016 while Theresa May was Home Secretary. Despite the mountain of bad press reported primarily in the Guardian’s Windrush scandal series, and a rebranding in 2018 by then Home Secretary Sajid Javid to a “compliant environment”, many aspects of the hostile environment are still in place. The project is calling on anyone wishing to take part to come forward and tell their story, to raise awareness of the racially targeted abuse inherent in the hostile environment policy.

One of those stories,story concerning a Jamaican woman called Sherron, was recounted by a relative at the project launch event at the West Indian Sports and Social Club in Moss Side. Sherron was refused a visa to come to the UK to attend her own son’s funeral. Sherron, who was blind and in a wheelchair, was told by the Home Office that she was at risk of absconding if granted a visa. Her relative spoke of the considerable stress Sherron was subjected to in having to reapply for the visa, which was eventually granted 48 hours before the funeral. Sherron just made it to the funeral but died in Manchester two weeks later.

Liverpool’s first black Lord Mayor Anna Rothery, spoke speaking at the event, and said.said. “The hostile environment is not a new thing: it’s been around for a long, long time but what is new is the normalisation of this language and mistreatment.”

Owen Hainsley is a 45-year-old father of three who was placed in immigration detention and nearly deported after his Windrush Scheme Application, to confirm his British citizenship, had been denied. Hainsley says that Home Office officials, “told me my children would be okay without me, that I could bring them up over Skype. How could they say that?”. During his time spent in immigration detention at Harmondsworth Hainsley wrote a song, which he performed to the crowd at the Windrush Wonders launch event.

The Windrush project is the creation of the Manchester based non-profit Migrants Union. Marcia Hutchinson MBE, project manager at the Migrants Union, was pleased at how the event went, saying:

“I was so moved by the number of people who came out and who participated in the event. So many people are unaware of what is happening to their fellow citizens and that the hostile environment is not just an inconvenience for many people it’s a matter of life and death.“

Hutchinson has previously explained that one of the biggest hurdles the project faces is being trusted by those with the stories to tell, due to the atmosphere of fear created by the hostile environment policy, saying:

“People can sometimes be wary because they’re worried the Home Office will literally come and take them away.”

To accommodate for this the project aims to get people whom the story tellers know and trust, such as family members, to record their experiences. Training in transcribing skills and interview techniques will be provided for those who wish to take part.