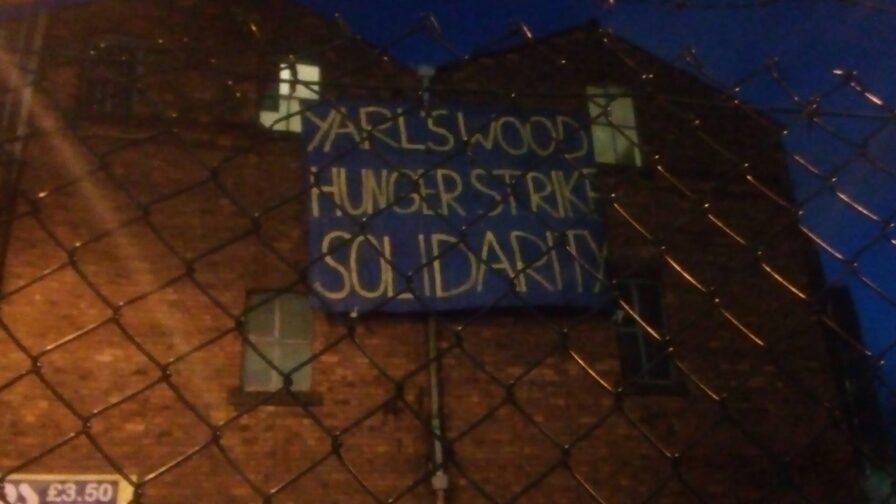 On the eve of International Women’s Day, Manchester squatters hoisted the banner in solidarity with the female hunger strikers of Yarl’s Wood Immigration Removal Centre, beckoning citizens into their space for a night of radical film and discussion. The films ranged from an investigation by Channel 4 News into the dehumanising conditions at the centre to an activist’s-eye view of the chain-rattling protest at the gates by Established Beyond.

Other films told stories of survivors of the centre such as Dianne Ngoza, a nurse who was detained at Yarl’s Wood and threatened with deportation. Dianne was released from detention in December 2016 following a very successful and high profile campaign by RAPAR and other supporters and she is still working with her solicitor on her case for leave to remain in the UK.

We also learnt of the victims of Yarl’s Wood, such as Christine Case who died of an embolism at the detention centre whilst guards ignored her cries for help. In another video, Nigerian-born gay rights activist and Yarl’s Wood survivor Aderonke Apata gave a damning indictment of Yarl’s Wood: ‘it is not a removal centre, it is a detention centre. It is a concentration camp.’

The films were followed by a talk from Dr Rhetta Moran, Researching and Learning Consultant and Matron of RAPAR, who likened the hunger strike to the actions  of the suffragettes, who found that, once imprisoned, “the only control they could exercise in that moment, was what went into their bodies.” Dr Moran went on to provide a political context to the hunger strikers, who “have been separated off from the rest of humanity so they can be held up as the scapegoats for everything else that goes on… in a time honoured way of divide and rule” by the government.

Further context for migration’s roots in Britain’s imperial past was also given: “we went there, so they come here,” as well as in the inequities of modern imperialist capitalism: “without exception, every single tax haven has a colonial history.” Dr. Moran paused momentarily to draw attention to the symbolic power of such an event being held in a formerly industrial, now unused building without any rent being paid to a landowner, and to praise the squatters’ quick reaction to the news of the Yarl’s Wood hunger strike, stating they have “put the flare up in Manchester.”

There was a note of pragmatism in Dr Moran’s caution that ‘we’re not in Bedfordshire [site of Yarl’s Wood], we’re in Manchester.” Attendees were then informed of a 42-bed detention centre in a “big grey box attached to the side of Terminal 2” at Manchester Airport. Detainees are not allowed to stay there for more than 5 nights, but “there have been deaths there.” Manchester Airport is owned by Manchester Holding Company, which in turn is owned by the ten local authorities of Greater Manchester.

“Those ten local authorities are also franchising contracts out to SERCO [the multinational outsourcing conglomerate responsible for the management of Yarl’s Wood] and G4S and the rest of those that don’t [just] have blood on their hands – they’re saturated in blood.” Dr. Moran was careful to point out that it is not those who “wear the badge” of SERCO, G4S or other outsourcing firms who are responsible for the companies’ violations of human rights, but the higher-ups who are profiting from human misery.

More pressure is required from British citizens before the government will bring this misery to a close, but the movement is gathering pace. On International Women’s Day, 545 people took part in a one-day fast in solidarity with the hunger strikers and a petition for their demands to be granted is nearing its target of 7000 signatures. One of the women on hunger strike sent out a statement to the press detailing those demands, which provide a harrowing insight into the lives of the women.

The list of demands includes “an end to indefinite detention and a return to the original plan of the 28 day limit,” “an end to the Home Office’s employing detainees to do menial work for £1 per hour. It prays on the vulnerable and forces them to participate in their own detention” and for “the Home Office to stop detaining the vulnerable people, that is victims of rape, that is torture, all forms of torture, trafficking, forced labour, the disabled, the mentally ill and so on… snatching [people] from their beds in the night and herding them like animals.”

To find out how you can help in campaigns to help the hunger strikers of Yarl’s Wood, contact RAPAR.