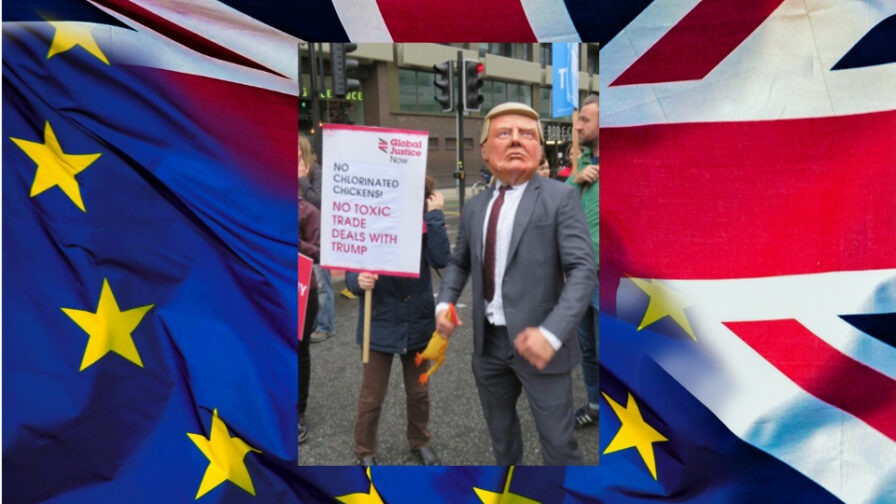 Do you fancy tucking into a turkey bathed in chlorine for your Christmas dinner? British academics think that may be a question we have to ask ourselves due to future trade deals with the USA, post Brexit. Chemically disinfected Christmas turkeys, with chemicals not meeting current safety standards, is just the latest scare story worrying Manchester Trade Action Network members.

The story, reporting on UK food policy experts research, was initially published in the International Business Times, and then picked up by The Daily Mirror and New Food Magazine. It identified four chemical disinfectants, including chlorine, used to wash American poultry that did not meet EU safety standards. The researchers said that the chemicals posed a risk to consumers as well as workers in the industry, and suggested it would be safer to keep EU standards after Brexit.

Recent weeks have seen Manchester activists coming out to demonstrate their increasing concern about the democratic deficit in the government’s trade plans as a secretive working group from the Department of International Trade (DIT) and US trade negotiators recently met surreptitiously to prepare the ground for a post-Brexit trade deal.

The government is struggling for good news following defeat of its proposal to push through its EU Withdrawal Bill, where back-benchers won the right to effectively object to the final deal. Brexit talks are now moving to negotiate a transition period before the UK leaves the EU, but splits in the government are becoming visible over trade issues. Some want continued regulatory alignment with the EU, to prevent rocking the boat so as to gain time and keep what we can. Others want divergence, which they see as true freedom to plough our own furrow.

Manchester activists have already called attention to the dominant role the US is demanding, and had greeted Tory conference attendees arriving at Piccadilly with these concerns.

Worries have been sharpened by DIT publishing it’s Trade Bill within hours of closing its public consultation indicating Liam Fox had sat up all night reading responses before going on Radio 4’s Today programme, at 7 am on the 7 November, to announce his bill. Or the consultation was a sham.

Many suspect that despite receiving several thousand detailed responses from members of civil society, civil servants had been instructed to write the bill without reference to input from anyone else.

And then came the warning by the US commerce secretary Wilbur Ross that a post-Brexit deal with Washington will hinge on the UK removing “unnecessary regulatory divergencies” with the US, including scrapping rules set by Brussels that hinder US trade- including regulations banning the import of chlorine-washed chicken.

Washing chicken with chlorine is a common US practice which serves to kill bacteria such as salmonella and campylobacter before they are consumed; in the EU food standards demand commodities are safe throughout their production and demand higher animal-welfare standards.

Cattle and sheep bread for their meat in the US are regularly injected with hormones (including steroids) to make them grow faster; this practice is banned in the EU due to fears about the potential risk to humans, the environment and livestock.

Antibiotics fed to livestock can also increase their growth, but their use promotes antibiotic resistance in bacteria, which can spread to humans. Growth promoting feed additives containing antibiotics are being phased out in the UK, while their use in the US continues to rise.

DEFRA secretary Michael Gove has said that chlorinated chicken will not be accepted, but many concerned with animal welfare as well as nutritional standards and food sovereignty are worried Liam Fox will sacrifice this principle for the sake of a wider deal and to promote the financial sector. University academics have also cautioned that similar Pathogen Reduction Treatments (PRTs) could be used on fish, fruit and vegetables.

The resurrection of the “chlorinated chicken” spectre provided activists with a ready focus for their “Manchester says NO to toxic trade” demo outside the Central Library, timed to coincide with talks and a demo outside Liam Fox’s Department for International Trade in London.

More importantly the activists are uneasy that at present MPs have no say at any stage in trade deals- neither setting the agenda, excluding things (such as the NHS) from negotiations, nor providing ongoing scrutiny as negotiations progress, and finally approving or rejecting a deal and are calling for this parliamentary input as part of “bringing back control”.

The Transatlantic Trade and Investment Partnership (TTIP) was negotiated between the EU and Obama administration but abandoned because of international hostility, in the EU largely focussed on unaccountable pro-business Investor-State Dispute Settlement “courts” which could penalise governments for regulatory action potentially harming corporate profits.

“Parliamentary motions on this have attracted 120 supporters from all the opposition parties and the DUP. However the only Greater Manchester MPs who have signed this are Kate Green (Stretford & Urmston), Lisa Nandy (Wigan) and David Crausby (Bolton NE). We want more people contacting their MPs. They should ask them to support Labour’s Shadow International Trade Secretary Barry Gardiner and sign Early Day Motion 128 calling for democratic oversight or trade.”

He added: “If the MP has already shown support, it does no harm to thank and remind them”.

The Manchester protest caught the eye of passers by and was snapped on mobile phones. Meanwhile a similar demonstration was staged outside DIT in London (also attended by a Donald Trump lookalike with a rubber chicken). Nick Dearden, Director of Global Justice Now, explained the wider threats and the urgency of taking action.

A couple of days later Dearden also spoke (see video here) to the Commons International Trade Committee on the 29 November.

He outlined the impotence of Parliament as things now stand with the Trade Bill and contrasted what the government is proposing with the arrangements in EU countries that enjoy scrutiny and where it still manages to strike trade deals. His apprehensions and positive suggestions were supported by Professor Derrick Wyatt QC of Brick Court Chambers which focuses on Commercial, EU/Competition and Public Law.

To contact your MP and call on them to stand up for Parliamentary Sovereignty in Trade, click here