Manchester International Festival 2021 kicks off with “choreography of desire” 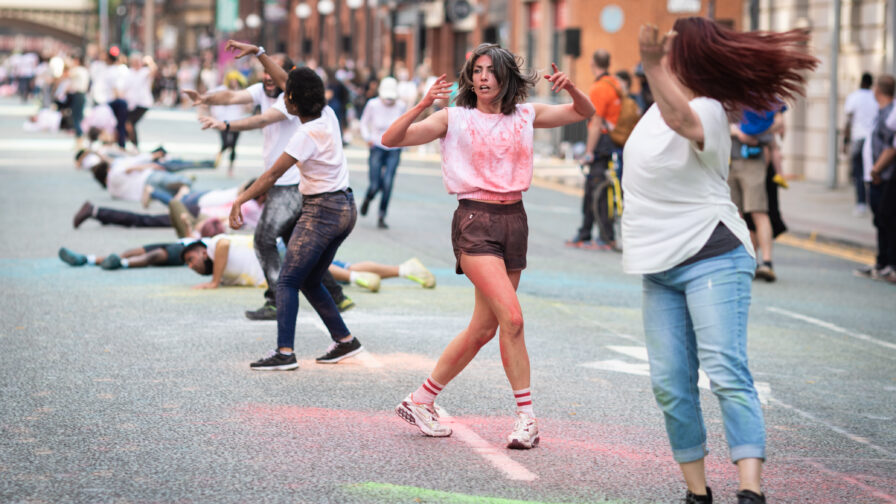 The opening night of Manchester International Festival 2021 this week saw an exhilarating dance piece take to Deansgate. Judith Suckling went along and reports on a show which was raw, emotive, shocking and funny.

All live events in 2021 have had to deal with uncertainty because of coronavirus, and the Manchester International Festival (MIF) was no exception. Artists around the world were hit incredibly hard, with the closure of almost all in-person live performance spaces.

MIF’s opening ceremony on Thursday night really brought this reality home. Sea Change by Boris Charmatz threw the experience of the pandemic right in your face. It made you feel, hear and see what we have all been through in the last sixteen months.

Audience members started their journey around the back of a car park and some dark bridges near the Great Northern Building. Confused faces caught each other’s eye over the mandatory facemasks. The ever-friendly MIF volunteers ushered the audience on to a closed Deansgate.

A wall of sound hit you. A dancer, standing under the shadow of the Beetham Tower, screamed numbers as loudly as possible. Each number sparked a movement from the 140 dancers — all Greater Manchester residents — who were lined up in socially distanced fashion down the street. The audience looked on with astonishment. Much like the pandemic, there was no warning of what you were about to be thrown into; there was only shouting, confusion, and disorientation.

It was pleasing to be able to stroll as slowly as you liked through one of the city’s busiest streets, so often full of bumper-to-bumper rush hour traffic. The snake of choreography filled the whole road; the dancers used their arms, legs, and voices to express every emotion that they had felt in the last sixteen months.

“We can’t party, we can’t touch each other,” Charmatz tells me during our interview on the day of the ceremony. “For some of us, we can’t even make love. We are separated, we are locked down.”

The dancers’ sheer energy was the most striking thing about the show. “Sea Change is a choreography of desire,” the French director says. “There’s a lot of screaming, a lot of rage, a lot of running. There’s a zombie part — the dancers do that so well.”

Astoundingly, most of the people involved had no dancing experience. They only trained for 15 days prior to the show which lasted three straight hours.

“It is nice because they are out of their box,” Charmatz explains. “We are really pushing them to work hard. They are being pushed by desire. They signed up to be part of something big, something that they would be able to look back on forever.”

Charmatz described how happy he was to be back in Manchester again working with its people. “It involves 140 Greater Manchester residents, and they are really great. I know this is about the city, but it is also about the people. It is an amazing team gathered by the festival. So many different bodies, minds, brains, ages, cultures, skills. I love this team. I will be heartbroken to leave Manchester after that.”

Boris talked of his time in Manchester four years ago when he had been bought his show 10000 Gestures to the Manchester International Festival.

“I loved the city of Manchester and wanted to come back. Of course, originally, we should be able to carry each other, touch each other and to go within the crowd. This we cannot do. So, we invented a special project.”

Mica Quartey works for Manchester city council and was one of the Greater Manchester residents taking part in the spectacular. She said:

“We live in this city and MIF is back after two years which is brilliant. It’s an incredible thing to be part of to promote Manchester and the great city it is really. This is the best opportunity you’re going to get, probably for your whole life.”

It’s clear that bringing world-renowned artists to the city, and pairing them with interesting venues and local residents, is MIF’s greatest strength.

Amongst the cast was recent dance graduate Ashleigh Shorrock. She was supposed to graduate last year and talked about the amazing opportunity it was to work with the professional dancers and Charmatz.

“I wanted to be involved with a project, with a group of people, that share the same passion as I do for the arts. After the year we’ve had, I couldn’t think of anything better to do.”

Darren Mathews, an IT worker who lives in Manchester, was another cast member.

“I’ve always tried to apply to opening ceremonies but never got on to anything,” he told me. “It’s totally out of my comfort zone but I’m really glad I did it. My friends and family were completely shocked when I said I was doing this. They are coming down to watch me tonight.”

When you finished the short walk up Deansgate, you felt like you had witnessed a show which was at once raw, emotive, and shockingly funny. This is what Charmatz had intended for his audience. “It’s quite short but it’s really intense,” he says. “It’s like a pill, or a very strong cocktail — I don’t know what it is, but it’s strong. For the dancers it’s like a marathon; it’s a 3-hour long marathon. They keep running down the line and they do all this crazy stuff.”

The audience of the opening ceremony were as eclectic as the performers. Alys Kay and Fiona Stiff of Old Trafford in Manchester talked of how they had tried to put a narrative on the dance. Fiona described it as being like a Scandinavian Noir. “It was stirring and emotional,” Alys recalled. “I enjoyed being confronted. I felt excited and scared. I liked it.”

Manuel and Christina Losa from northern Spain were also among the audience. “It was something different, we thought it was amazing,” they said. “We could hear the sounds of the drums from one speaker and the sounds of a piano from another. They are amazing dancers with great choreography.”

The first day of MIF also saw a monumental new participatory artwork land in Piccadilly Gardens — Big Ben Lying Down With Political Books. Lying almost horizontal, the 42-metre replica of the iconic clock tower is coated in 20,000 copies of books that have shaped British politics, ranging from authors like Margaret Atwood, George Orwell and Karl Marx. The temporary landmark aims to inspire new conversations about what we value.

“Global symbols like Big Ben stand up straight and never change,” says Marta Minujín, the Argentine conceptual and performance artist who designed the exhibit. “But the world is always changing.”

Charmatz and Minujín have certainly left their marks on the opening day of MIF 2021. A year that has been clouded by the uncertainty of a pandemic is seeing a rare beam of joy and artistry. Let’s all hope that MIF 2023 take place in better circumstances.

The Manchester International Festival runs from the 1 st — 18 th July. To reserve tickets and find out more click here.