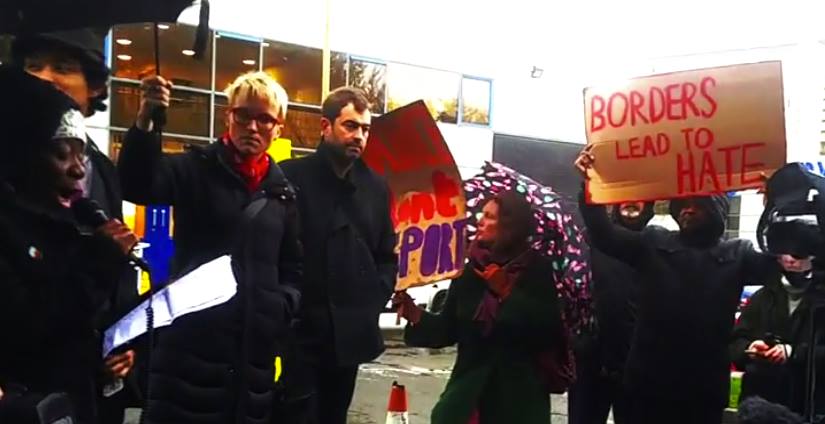 The Home Office is making an unlawful attempt to remove community organiser and nurse Dianne Ngoza from the UK to Zambia this Wednesday 30th November. Dianne has lived in the UK for 14 years.

The Home Office refused Dianne’s leave to remain, claiming that she would have no problem integrating into Zambian society if she returned there. But Dianne applied for the right to remain in the UK on the basis of the right to family and private life. The UK has been Dianne’s home since 2002 and she has no family or friends in Zambia. If Dianne is deported on Wednesday, she will be separated from her daughter, who is her only surviving family member.

Dianne is a dedicated activist and volunteer in Manchester but the Home Office have so far ignored letters sent by organisations and individuals testifying to her importance to the community. They denied Dianne the right to appeal this decision from within the UK. Dianne’s supporters claim that the Home Office are not respecting Dianne’s right to appeal: it will be effectively impossible for her to submit an appeal once she is in Zambia because she has no family or other kind of support there.

Dianne was taken into government custody on Wednesday 16th November. On that day, Dianne had to report to Dallas Court in Salford. Her friends and supporters were concerned that Dianne would be detained at the centre because her right to remain and right to appeal from the UK had been refused.

A demonstration outside Dallas Court was organised by Dianne’s friends and supporters. Dianne made a speech before going into the centre. Four hours later the police tried to remove her in an unmarked van but were unable to due to a peaceful protest blocking the van’s exit.

After taking Dianne back into the centre, the police sent an officer out to negotiate with Dianne’s supporters. The officer said that the police were concerned for Dianne’s welfare because Dallas Court has no food and no hygiene or sleeping facilities. Dianne supporters stated they were told that the police wanted to move Dianne to Pennine House Detention Centre and the protest was blocking the way.

Dianne’s daughter, friends, supporters and legal support were unable to locate or contact her. It is now known that Dianne is in Yarl’s Wood Detention Centre. But despite the relief of finding her, they remain extremely concerned.

One of Dianne’s friends, who visited Dianne on Wednesday 23rd, said she looked exhausted and kept talking about food. She believes that Yarl’s Wood haven’t provided an adequate vegan diet for Dianne. Based on this visit to Yarl’s Wood, Dianne’s supporters released the following statement raising concerns for her welfare:

“Since she was detained more than a week ago, Dianne has been given mainly fruit to eat and has only had two proper meals – stir frys consisting of potatoes and vegetables. She has also had one meal of kidney beans, tomatoes and onions and another just of chick peas.”

Another of Dianne’s friends complained to their MP about Yarl’s Wood’s failure to provide appropriate food for Dianne. She says that since her complaint, she has been unable to get through to Dianne on the phone.

As well as being denied her right to food and communication at Yarl’s Wood, Dianne has also been denied her legal right to have her new evidence considered before removal from the UK. She has been booked onto a flight to Nairobi from Heathrow at 5.25pm on Wednesday 30th November, and a connecting flight from Nairobi to Ndola in Zambia.

The Home Office have done this despite the fact that Dianne still has an outstanding human rights application for leave to remain in the UK. Her solicitor Mervyn Cross, of the firm Duncan Lewis, said:

“Clearly for the Home Office to issue removal directions when Dianne has an outstanding human rights pending is unlawful. We will be challenging Dianne’s removal if the Home Office do not confirm that they will suspend it.”

Thanks to the outpouring of support Dianne has received, her MP Lucy Powell, has written to the Immigration Minister, Robert Goodwill, urging him to release Dianne from detention and to give her the right to appeal from within the UK.

The Minister’s Office has told Powell that Goodwill will consider the case and that Dianne will not be removed from the UK before he has replied to Powell’s letter. Dianne’s fate now depends on supporters writing to both the Immigration Minister and Kenyan Airways to demand action before she is deported on Wednesday.

What you can do to help

RAPAR, the human rights organisation representing Dianne, are appealing to people to write letters to the Immigration Minister, Robert Goodwill, about Dianne’s case. A template letter can be found under the updates on their page for Dianne’s case, Dignity for Dianne.

They also need people to write to Kenyan Airways and will be posting a template letter for this ASAP so keep checking the page for new updates.