Manchester campaigns for climate justice in the run up to Cop26 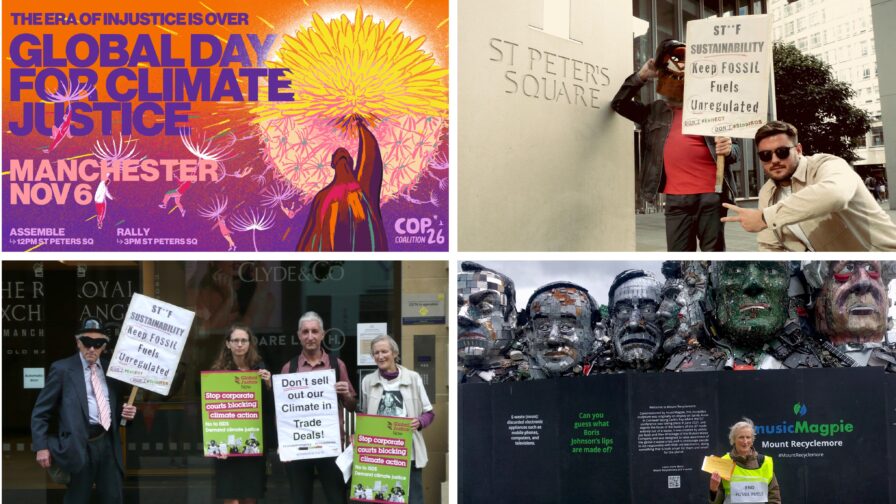 Stephen Pennells reports on climate justice campaigns in Manchester running up to the Cop26 climate conference in Glasgow.

Mancunian activists are working hard on a variety of campaigns to inform, educate and influence world leaders attending the Cop26 United Nations climate conference which begins in Glasgow on 31 October.

The conference is billed as “Uniting the World to Tackle Climate Change” and campaigning groups have been buzzing with earnest concerns, information, chatter, and a torrent of actions and mandates aimed at politicians and institutions that could influence the climate debate.

Campaigners for climate justice worldwide have suffered uncertainties over the pandemic, not knowing how or even if the Cop26 meeting would go ahead. The tradition of a mega-demo with feel-good gestures at the conference seems indulgent to some.

Many attendees may simply not travel due to the leaders of China and Russia not attending the summit. The problem of stop/go international travel restrictions, alongside the ongoing fears around catching Covid while infection rates are rising may also limit attendance.

Signs for the times

Manchester campaigners have been gearing up with numerous briefings and meetings – now increasingly in person meetings rather than only online, due to lockdown restrictions ending. Zoom campaigning does however look set to be a permanent addition to the activists toolkit.

Nevertheless, a group from the Young Christian Climate Network paraded a manifesto banner and boat “prop” to churches, cathedral and schools a few weeks ago on their pilgrimage to Glasgow.

Posters and banners have started appearing; Whalley Range Climate Action Group ran a craftivism workshop to generate more. Oxfam have been encouraging people in Manchester and across the UK to make and post 30 second videos of themselves marching, even if they cannot make it to Cop26 themselves.

Some local MPs, doubtlessly mindful of constituents’ lobbying, waxed indignant at a Commons debate on holding climate change to 1.5 degrees.  Afzal Khan echoed Pope Francis, talking about our “Common Home” from his Muslim perspective, concluding: “My constituents in Manchester, Gorton care deeply for the future of our planet, and they are desperate for the Government to step up and act before it is too late.”

Manchester’s non-elected great and good, concerned about local emissions have come together with a deluge of consultations through the #InOurNature project which aims to find new and creative ways to make Manchester a greener, healthier and more connected city.

People’s Summit and Global Day of Action for Climate Justice

National campaigning NGOs, through the Cop26 Coalition, are providing an alternative to Cop – a “People’s Summit”. This summit which is also in Glasgow can be attended in person and virtually, is focussing on a distinctly pro global south climate justice agenda – a reaction to failure, greenwash and insincerity from powerful players in the past.  Running from the 7-10 November, it allows worldwide participation.

But it’s also important to have people in Glasgow and people have been encouraged to go to demonstrate the dire need for action as well as to confirm and build their commitment. To this end a Global Day of Action on Saturday 6 November has a march and rally in Glasgow, but actions are also planned nationally and globally, findable through the Coalition website and people are encouraged to take local initiatives wherever they are.

However it may not be all plain sailing. An American climate denial “free-trade” organisation is reportedly staging their own alternative summit in Glasgow and it’s possible sceptics, contrarians and frivolous hecklers may try to disrupt the Manchester meetings.

So in addition to Glasgow’s rally a Manchester one is planned as well, in St. Peter’s Square, mustering at noon on 6 November. Activists are posting and distributing flyers and the University of Manchester Student Union promises a march with unions, faith groups, and many others taking part.

The speaker line-up is still being compiled to ensure diversity with communities most impacted having a voice rather than being talked about. Local politicians and leaders attending should find themselves listening rather than promising!

Later that evening the Christian ecology group A Rocha  is hosting a “Doxecology” concert at St. Thomas’s in  Salford.  Unabashedly a faith event, songs listed show social and political concern for people affected by the climate crisis.

This revolution may be even more pronounced, on Friday 5 November Youthstrike 4 Climate Manchester are coming together, in St. Peter’s Square. Their experience and sophistication has matured during lockdown, and they are pursuing their cause with urgency and angst with the slogan #UprootTheSystem.

Extinction Rebellion have been keeping their cards close to their chest and enquiries to local groups have also largely drawn a blank, those responding suggest the answer “carrying on carrying on”.

Fossil Free GM and Extinction Rebellion are protesting against the GM Pension Fund’s continued investment in climate destroying industries. They will be outside Andy Burnham’s office at 8am on 3 November saying: “Wake up Burnham- get GM out of fossil fuel investments”.

Local Quakers have been tackling climate and environmentally abusive institutions,  In September they were stickering and leafletting customers outside banks said to be still funding fossil fuels. During the Tory conference they held a silent vigil and leafleted delegates.

The Quakers recently planned to picket Shell petrol stations following Shell’s reported corruption of Nigerian officials and threatening Corporate Court coercion, using the Investor State Dispute Settlement(ISDS) mechanism to obtain an oil field.  It had to be cancelled due to sickness but it is being rescheduled.

In common with Quakers, they see justice, economics, human rights and environment/climate as intimately related and compromised by ISDS.  Mindful of current and previous cases they are both lobbying politicians against their inclusion in trade deals and embarrassing corporate law firms believed to be quietly involved in facilitating and profiteering from the unbalanced pro-transnational system. This allows polluters to sue for loss of projected future profits, cases being adjudicated in secret by a cabal of business lawyers.

They therefore wrote to four firms (Clyde and Co., DLA Piper, Freshfields Bruckhaus Deringer, and Patton Boggs), with offices in Manchester and Salford asking for clarification as to their involvement. No answers have been received from the firms. The campaigners took part in a national day of action, visiting offices and collecting signatures at stalls in St. Ann’s and St. Peter’s Squares where some of the firms are sited.

This campaign refocuses concerns raised about food, employment, the NHS and environmental standards threatened by US trade negotiations in the past, as reported previously in The Meteor. The campaign will continue if the government pushes forward with trade deals threatening the abilities of economically weaker countries to decarbonise and using Cop26 related meetings to spread the word.

With the pandemic continuing to hamstring vulnerable economies and thousands dying daily, a second ongoing campaign is shared by Manchester’s Amnesty, Global Justice and Oxfam campaigners groups- tackling vaccine inequality.  This has been caused by rich governments not only queue-jumping and hoarding expensive pharmaceuticals but also blocking the majority of governments’ calls for the temporary waiving of patent rights and sharing know-how in the UN’s World Trade and World Health Organisations. This would enable currently underemployed pharmaceutical resources globally to produce life-saving medicines immediately.

Oxfam activist David Llewellynn endorses the words of WHO DG Dr Tedros Adhanom Ghebreyesus: “…in terms of global security, the faster we can vaccinate, the faster we will be able to focus on fighting other threats like the climate crisis, which has not disappeared while our attention has been consumed by the virus.”

A third concern, undertaken by local Global Justice, Oxfam and Jubilee Debt Campaign (JDC) activists in coalition, has focused on commercial banks continuing to profiteer from high-risk/ high-interest loans promoted with countries in the global south years ago.

This #ClimateDebtCrisis campaign calls for Least Developed Countries and Small Island Developing States to be allowed to keep the funds needed for the pandemic and to build resilience, tackle the climate crisis, and build a sustainable economy- freeing them from long-term dependency.

Debtor countries are coy about complaining, mindful of future borrowing needs and the risk of debts being sold on to speculators, so clarity in this field is difficult to achieve.  Petitions to Boris Johnson (before the G7 conference and Cop) have called for his leadership in demanding debt cancellation, grants for climate action rather than offering new debts, and action to stop corporate debt speculation by “vultures”.

A spokesman for JDC Manchester said: “Mancunians have gone further and also co-signed giant letters which we’ve presented to key banks in Spinningfields; these banks haven’t replied to our protest and offer of a platform to explain their side of the story.

“This action is being repeated to bring home the message Mancunian opinion shouldn’t be blanked. We’ll be using the Cop rallies to share this scandalous injustice”.

Stephen is a writer and activist based in Manchester. He campaigns primarily on issues of international economic justice and was an active member of some of the campaigns mentioned in this article.

Feature image and all in article images provided by Stephen Pennells.