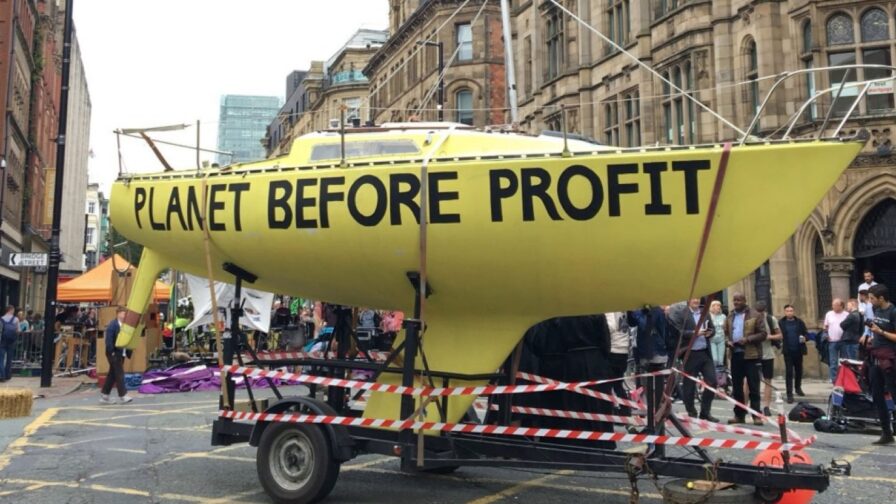 Manchester City Council has not kept its promises of emergency action on climate change, a new report coordinated by Climate Emergency Manchester has found.

Manchester City Council is one of seven UK city councils which has not kept its promises of emergency action on climate change, according to a new report.

The report by Climate Emergency Manchester, published last week and drawing on research by residents of seven major UK cities, paints a picture of delay, broken promises and lack of ambition.

None of the cities covered in the report, including Manchester, has achieved the goals each set for themselves when they declared climate emergencies or emergency action in 2019.

“Engagement is rarely ongoing or city-wide,” the report says. “Few climate emergency responses are costed, or include a plan for funding,” and talk of “‘green recovery’ [is] more slogan than reality​.”

The report examines councils’ actions across six areas to assess whether they have met their environmental protection goals; emission reduction targets, governance and engagement, energy, transport, homes and building, and finally nature and the circular economy.

Each city was scored on a scale of 0 to 2 per category, with 0 meaning no progress had been made and 2 meaning good progress had been made. The scores across the six areas were then added together to provide overall scores out of 12. The top scoring councils, with 5 out of a possible 12, were Bristol and Nottingham; Manchester scored 2 out of 12, coming fourth out of the seven cities assessed.

However, rather than having a single plan, the Manchester Climate Change Agency, an arms-length body tasked with overseeing climate change action in the city and funded mainly by the council, has recommended a ‘suite’ of action plans across partner organisations for the 2020-2025 period. According to the report, this obscures who has ownership for which actions.

On governance and engagement, the council has taken a devolved, partnership-based approach to climate action involving residents, large organisations that make up 20% of the city’s emissions, as well as the council itself. However, the report says, this approach does not show who is clearly accountable or driving this work.

For transport, the report said Manchester council had failed to install pop-up cycle lanes in the city centre during lockdown, and criticised the council for having a 35.6% share in Manchester Airport Group. In May, The Meteor reported that the ​council had bailed out Manchester airport with a £250m financial aid package​.

On energy efficiency, the report acknowledged that the council’s Climate Change Action Plan​ 2020-2025 had outlined a Carbon Reduction Programme. The first phase of this plan includes £2.6 million invested in energy conservation measures and around £4.3 million invested in energy generation technology at 13 buildings in the council’s estate. It also identified the council’s commitment to a Civic Quarter Heat Network – a shared heat network for council-owned properties and some private properties around the Town Hal​l. However, the report says, research has suggested a ​double-counting of savings​ from these initiatives.

The report also highlighted the council’s promises of “a comprehensive investment programme” to deliver energy efficiency, retrofit and energy generation from solar panels and heat pumps across all council-owned properties or those managed by Northwards Housing. However, since the declaration of the climate emergency, the report says, there have been no new policies, schemes or grants made available to help householders retrofit homes.

Finally, on nature and the circular economy, the report says the council has approved a number of ​car parks ​since declaring a climate emergency and that planning decisions have been taken in private​ during lockdown.

In response to the report, Executive Member for the Environment, Planning and Transport, Councillor Angeliki Stogia, told The Meteor: “This report lacks understanding of Manchester’s shared response to the climate emergency, presenting only a narrow and incomplete assessment of the vast majority of policies and projects that the council has been progressing.”

The council did not provide The Meteor any examples of where it was working with partners as part of this “shared response” to the climate emergency, or of broader action it was taking which had not been covered by the report’s six assessment areas.

Chloe Jeffries of Climate Emergency Manchester said: “‘Manchester leads the way’ is a phrase that features in almost any council discussion or debate. The report we coordinated with researchers and campaigners in other cities shows that this is not helpful language. No one local authority has the answers. But we want to see concrete examples of councils learning from each other.

“For example, has Manchester looked at Nottingham’s Workplace Parking Levy? Or Bristol’s interactive mapping tools so that the public can input into transport decisions? Or Birmingham’s increasing emphasis on social justice? Manchester now needs to focus on concrete actions which can be rolled out quickly. For example, there are clear next steps around active travel, with pop-up cycle lanes.”

The Centre for Cities think tank told The Meteor that climate breakdown was “a global issue” which “should be dealt with at a national and international level,” but that the council does have the power to bring about environmental improvements in local air quality. Manchester City Council has postponed implementing its Clean Air Zone until 2022, a move that Centre for Cities expressed concern about.

“We have linked air pollution to one in 23 deaths in Manchester so this postponement is likely to have a real impact on people’s health. I would urge the council to move forward with a Clean Air Zone as soon as possible,” a spokesperson for Centre for Cities said. While Covid-19 has delayed implementation, five cities across the UK have been mandated to introduce a Clean Air Zone by 2020; Birmingham, Leeds, Derby, Nottingham and Southampton.

Manchester-based active travel activists acknowledged some measures the council has taken to protect the city region’s environment but said that its approach was generally “confused”.

Nick Hubble of Walk Ride Greater Manchester told The Meteor: “The large-scale emergency pedestrianisation of Manchester city centre is of course welcomed. At the same time, the council’s refusal to install temporary cycling measures more broadly has rightly come under fierce criticism. With public transport capacity severely reduced due to social-distancing requirements, the council does not have an answer as to how the swathes of the city’s population who can’t or don’t want to drive are supposed to get into the city centre to enjoy new car-free areas.

“Last week saw the inauguration of the first ‘CYCLOPS’-style safe cycling junction in the UK on the Chorlton Cycle Way, which will greatly enhance the attractiveness of cycling in that area.” However, “people elsewhere in the council’s local authority area – many of whom face the very real risk of risk of transport poverty – are de facto denied the option of reliable, practically free travel by bicycle for trips that are too far to walk.”

The Climate Emergency Manchester report concludes with a call for citizens to put pressure on the council by scrutinising its Covid-19 recovery plans​ and local climate action plans​. It also urges citizens to send Freedom of Information Act requests​ to Manchester city council so that its climate policies could be compared to those of other cities and cities could then more readily learn from each other.

You can read the full report here