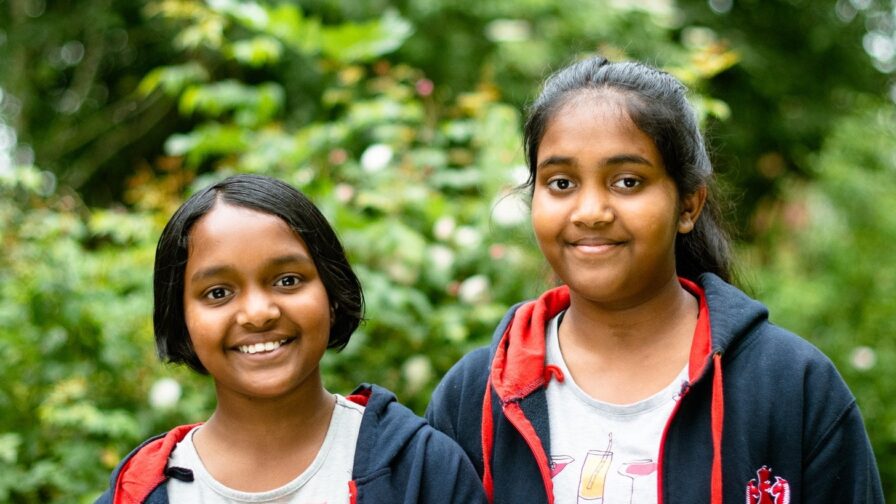 Two girls from Timperley in Trafford are taking on the world in the ultimate game of strategy. Guest article from The Mill.

Tarini and Thisumi Jayawarna live in Timperley, a leafy suburban village in Trafford just north of Altrincham. Walking up to their house, I catch a glimpse of trophies and medals lining the bedroom windows, glinting in the rays of sunlight: The British Championships in Torquay, the 2019 European School Championships in Romania, the Women’s League. Their mother, Nilanga, beckons me into the house with a welcoming smile and I sit down in the living room to meet two of the country’s best young chess players.

“I remember your first competition, Tarini,” Nilanga says fondly. “The first tournament you didn’t win many. I think you won 50% of the matches.”

“I just went along and started playing,” Tarini says with a laugh. “It was in school and we used to win little badges. We play against adults now.”

Tarini is 14 years old. A dream school day is back-to-back maths and art lessons. Her younger sister Thisumi is nine years old, loves playing cricket, reading Harry Potter and is learning to play the piano. Before meeting them, I was unsure of what to expect — my preconception of child prodigies was that they were serious-minded, distinctly un-childlike. The two sisters are quiet, but they are both playful and chatty.

Tarini and Thisumi are top of their age group on the UK chess scene — their incisive techniques even unsettling older, more experienced hopefuls for the national team, who compete internationally every year. Tarini is rated 1,520 and Thisumi is ranked 1,316 in the FIDE rating — the system used to determine the strength of a player when they’re playing in international competitions. A beginner will average 800, and the rating for a grandmaster is usually around 2,500.

Right now, the girls are decompressing after gruelling matches at the qualifiers for the England trials this year — wins which get you one step closer to making the England Team. According to Nilanga, you’re invited based on your standing in the country, not just your age category or gender.

“So it’s a big thing to make the England team when you’re in Year 5. That’s the youngest you can make the trials. Then based on the points you score you will make the team,” Nilanga explains. “I made it in Year 5 by just half a point,” Tarini says. “I didn’t make it,” Thisumi says. “Next year,” she whispers to herself.

It was watching their older brother, Nugith, play at chess tournaments all over the country when they were babies that sparked their passion for chess. “Me and my husband never played chess,” Nilanga explains, adding: “We always say that is why they are good, because we didn’t teach them!”

Nugith would carry Tarini and Thisumi as tiny babies into the car seat on his way to competitions. One of Tarini’s earliest memories is standing on a chair watching him at the England trials at three years old, enraptured. Nugith left chess to focus on his studies. Now eighteen, he’s about to study engineering at Oxford, following in his mother’s footsteps, who has a PhD in electrical engineering.

The girls have different playing styles, I’m told by their coach. It’s a measure of how competitive elite chess is that their coach doesn’t want to be named, even when the players are kids. If their opponents read her name in The Mill, it might suggest how the girls are going to play.

What she will tell me is that she’s a former European Champion who works for a coaching firm teaching the most advanced players across the world. Magnus Carlsen, the unbeaten world champion, runs the company. The coach explains that she is working on their strategy for upcoming tournaments.

Tarini is more positional — a quiet player who likes to play the long game to slowly outmanoeuvre an opponent, whereas Thisumi likes to attack, using intuition and a feel for the board. “Both are good — but we need to work on tactics a bit more,” says the coach. “We’re working on openings that show off Thisumi’s strengths at the moment.”

The coach is glowing about her Manchester protégées. “I’ve been working with the girls for about two years now,” she tells me. “So I know them very well. They’re both very hard-working, which I like with my students because it means you don’t have to push them.”

Thisumi knows she needs to focus on strategy. “Before the tournaments we go through the openings just one final time, just to make sure it’s in our heads,” she tells me. “And if we know who we’re playing, we’ll memorise and play their old games to study what they play.”

The girls’ last in-person match was the British Championships in August 2019 in Torquay, Devon. The room smelled of old carpets, fish and chips, and dashed hope. The girls were entranced by the occasion, and afraid.

“There were three girls who could’ve won, based on how the last matches went,” Nilanga tells me, recalling watching from the sidelines. Tarini was playing against a boy. “But then it got to the last game and Tarini only needed a draw to win the title, and she didn’t know, so I was thinking: Take a draw, take a draw!”

“But that would have been a joint title,” Tarini says. Nilanga recalls the tension of a gritty battle — how eventually Tarini found a clear advantage, beat the boy and gained the sole title of Best Girl and Under 12 Ultimate. Thisumi won Under 9 British Girls Champion — a joint title with another young chess prodigy from Coventry, Elis Denele. “They are two sisters as well, Elis and Imogen,” Nilanga says. “Very, very strong players. And you get on most of the time right?”

The sweetness between the two sisters is made a little sour when I ask if they’ve ever had to play each other. “Sometimes!” Nilanga says with a laugh. Tarini and Thisumi visibly tense up. I’m reminded of another sibling rivalry: Serena and Venus Williams facing off at the Wimbledon Final in 2008, two champions on the world stage. “It’s not nice,” Nilanga says. “Especially when the little one wins. There have been a few times recently where Thisumi has won.”

Most of the tournaments in the past 18 months have been played remotely. Which, inevitably, has sparked concerns about cheating. “It’s hard to know who’s been working hard and who’s improved so drastically their rating has gone up so much,” says Victor Cross, who has managed the England Juniors team for the last 11 years. His role is to supervise the children at international tournaments — parents aren’t allowed to go to international matches anymore. “Some parents are very intense and you see a child just buckle under pressure,” he explains. “But some parents send kids in the right frame of mind.”

“I wanna become a world master“

Sarah Longson, an international chess player who lives in Cheshire (2,039 FIDE rating) tells me that Greater Manchester has lagged behind when it comes to producing chess stars in recent times, but that’s starting to change. More and more chess players from around here are joining the England Juniors team every year. “You have to be obsessed with chess. It’s so hard and so complicated,” she says. “One move can cost you a whole tournament or a point for England.”

I sense that the girls pass the obsessive test. So I ask them to tell me about their dreams. “I wanna become a world master,” Tarini says, before adding: “You need to get a 2,100 FIDE rating to get a proper world title. So we need to play quite a lot more.” Thisumi’s goal is the same. “I am quite young so it’s quite far away, but if I keep playing I can build it up, I can get there.”

To get there, they will need to learn a dizzying array of attacks and defences — memorising their opponents’ strategies while varying their own to make it more difficult for opponents to prepare against them. And they will also need to develop less technical traits, like stamina and bloody-mindedness. “Last year, when I was in Romania there was a match, it was five hours long,” Thisumi says. She sounds tired remembering it. “And sometimes when a match is that long, you just wanna give up. I thought I wouldn’t win since I felt like I couldn’t keep playing, but in the end I did win.”

“Another thing that we wanted to do with chess because we get to travel around lots of countries, is play the different styles,” Tarini says, explaining that each country has a distinct style of attack and defence playing. Tarini has a kinship with the Czech Republic, admiring the willingness to endure long, tough games.

Fighting for the advantage

I ask if they liked the hit Netflix series The Queen’s Gambit, an engrossing story of a young orphan chess prodigy, Beth, whose alcohol and drug dependency spirals as she reaches the lofty heights of success.

“I didn’t let them watch it,” Nilanga says sharply, and I realise I’ve forgotten how old they are. “These two are still too young. But that [the show] helped a lot, especially getting women back into chess.”

Sarah tells me she’s seen a “massive surge” in girls wanting to get involved in chess since the success of The Queen’s Gambit — that suddenly, the chess scene is replete with energy and enthusiasm. And in terms of the England squad, “We don’t organise by gender,” Victor tells me. “If you’re good, you’re in, if you’re not, you’re out.”

Even so, Nilanga tells me the chess scene still feels like a man’s world in Manchester. The percentage of girls and women playing chess is much lower than boys and men — and while there are lots of good female chess players in primary school, they tend to drop out when they get older.

Why? She hazards: “They travel a lot, there’s lots of peer pressure, saying girls are supposed to be gymnastic or whatever. It’s a real shame. The girls’ school is supposed to be a grammar school with, you know, really clever students,” she laughs modestly. “But there’s no chess team at all.”

Before I go, they play a small game of chess together. Thisumi is playing black, Tarini is playing white. “That means I have an advantage,” Tarini tells me, and she makes her move. “I can just take this one,” Thisumi says, knocking off a white pawn. They giggle for a moment, and then they’re focussed, lost in the game, both trying to gain control of the board. As I leave I notice they’re still watching the chess pieces, like two hunters circling a beast, waiting for the right moment to finish it off.

Article first published by The Mill, Manchester, on 26 June 2021

The Mill is Greater Manchester’s new quality newspaper delivered by email. To Join 13,000 people on their free mailing list and get thoughtful journalism in you inbox every week – click here.