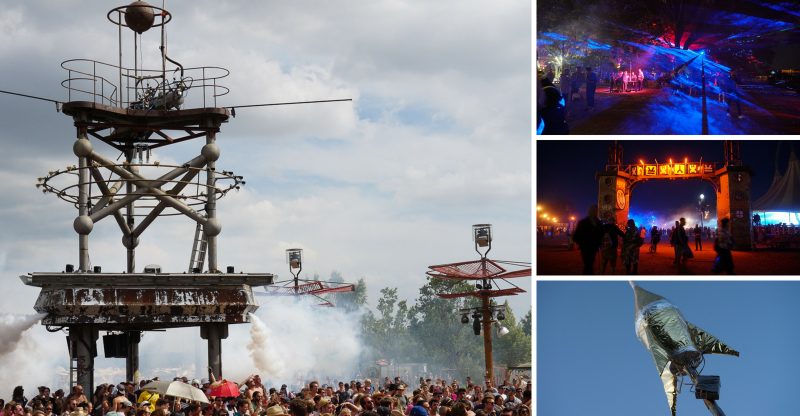 The long-standing, alternative, anti-capitalist and strongly anti-fascist Fusion Festival was this year graced by storming sets from two of Manchester’s most beloved underground electronic music bands.

Held on a former soviet air base in Lärz, North East Germany, Fusion Festival is billed as four days of ‘holiday communism’. With a strong ethos of diversity and inclusion, Fusion strives to create and celebrate a parallel society of a special kind, in search of a better world.

Amidst the revelry, a clear message of tolerance and inclusivity prevails, with even the drinks vessels bearing the message ‘Kein mensch ist illegal’. Translating as ‘no one is illegal’, the phrase also references a loosely connected international network of anti-racist groups and religious asylum initiatives that represent non-resident immigrants who stay illegally and are at risk of deportation.

At Fusion, a diverse array of music, theatre, performance and cinema are added in to a whole spectrum of installations, interaction, arts and communication.

Into this spectacle, Manchester bands Henge and The Age of Glass touched down, (presumably travelling by rocket), adding weight to Tony Wilson’s famous statement “This is Manchester, we do things differently here”. Together they are responsible for Space Cassette; a ravey, warehouse event series that manages to combine all the best elements of the underground electronic music scene with 80’s video-taped science fiction knitted together within an outlandish theatrical framework.

Henge performed on the Friday night in the Cabaret Stage. Originally a missile bunker, the thick concrete arched construction working so well to contain sound that barely anything could be heard from the outside.

Most UK festivals would just be getting started on a Friday, but Fusion had been running since Wednesday; the crowd had had plenty of time to get settled in and suitably well-oiled by the time Henge were ready to perform.

Henge came to Earth in the name of rave, bringing with them ‘the gift of cosmic dross’, a new form of music to our planet made of ‘mutated frequencies’. According to Henge, “There are no earth words to describe these sounds. But you will learn how to love and dance again”. 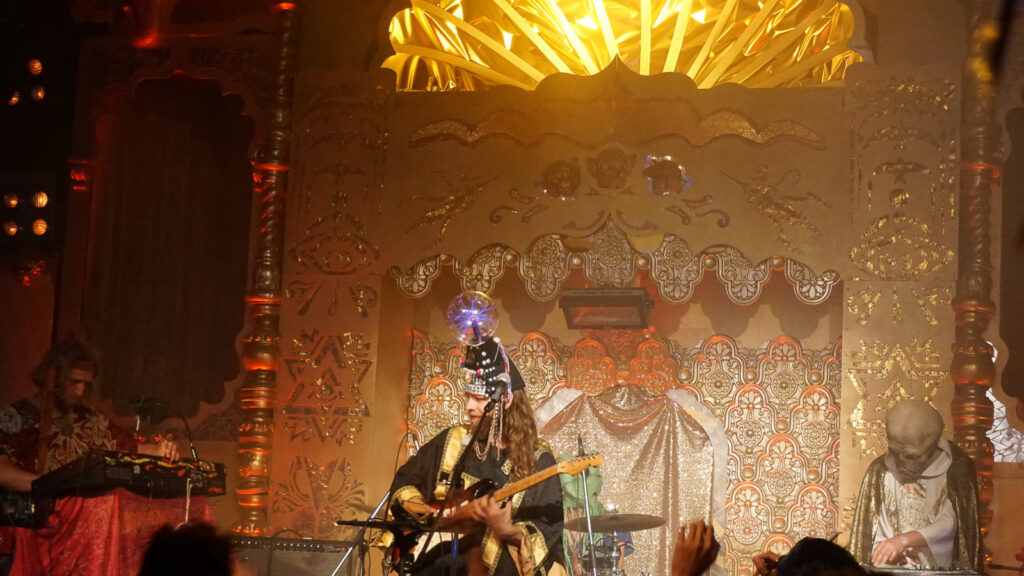 The ‘ravelings’ of Fusion absorbed and moved to these mutated frequencies; you could feel the connectedness in the room as our consciousness levels grew and as the crowd learned to love and dance again.

Teaching us about the errors of our ways, Henge spoke of our most precious resource and warned we have to be careful and respectful of this finite commodity:

“Water you are giving me life and you do so affably,

Reacting with infra-red light you provide me energy”

A serious message, delivered with charismatic humour, underpinned by ridiculous yet infectious melodies.

Once Henge had us firmly within their thrall, they delivered their ultimate message, in the form of the joyous rousing sing-a-long crescendo ‘Demilitarise’. The seemingly chaotic layers of drums, synths and lyrics built and built, only to collapse and descend into a cappella singing from the band, and seemingly every single member of the audience. 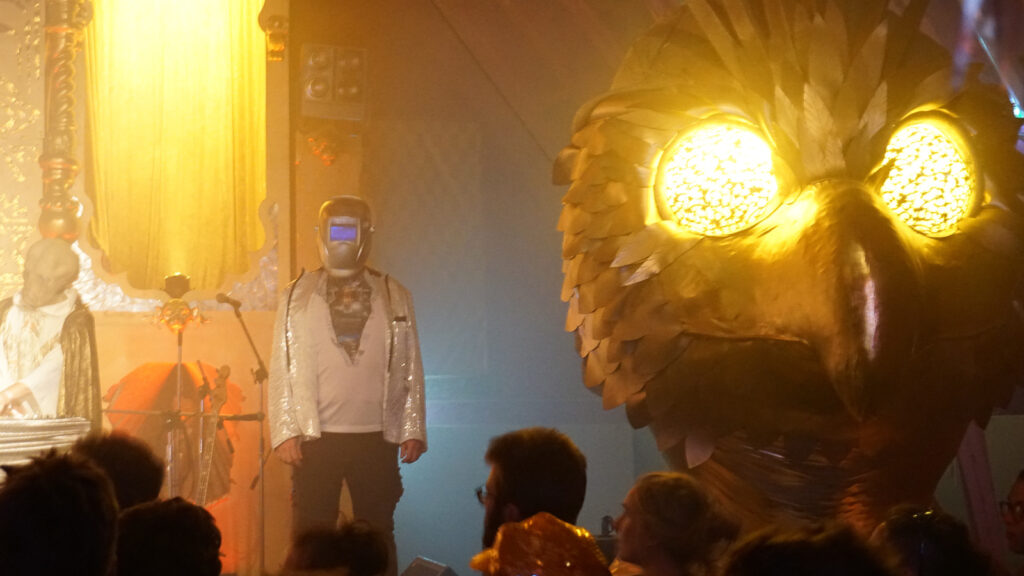 “WE DEMAND THAT THE WEAPONS OF WAR ARE MANUFACTURED NO MORE,

AND THAT WE HAVE IN IT’S PLACE, THE MEANS TO UNITE, AND COLONISE SPACE.”

A truly fitting festival for Henge to be performing this song, the whole site being an actual demilitarised legacy from previous conflict.

As Henge left the stage, they left the crowd to continue the refrain, which they did, well into the allotted time for the next act on the stage; the compere had to fight to regain the attention of the audience.

Saturday night it was the turn of The Age of Glass to broadcast their mighty Mancunian musical talent to the crowds. Billed to play on the ‘Seebühne’ stage, we knew from the sound of the name there would be some sort of ship or water involved. Having thought we’d arrived at the correct place, at the correct time, we were surprised at the techno which pumped out of the speakers. The techno was emanating from a  colossal sunken tanker, with the only parts projecting out of the sand being the prow of the ship, the bridge, and the taller masts, we realised our mistake.

Had we translated ‘Seebühne’, which literally means ‘lake stage’, it would have dawned upon us earlier that we were in the wrong place. We found the correct venue in good time, this stage resembling a small caravel sailing ship, and were treated to an extended sound check as The Age of Glass warmed up their instruments.

The snatches of gritty synth, heavy bass tones, snappy drum riffs and other-worldly vocal utterances gave us a glimpse that The Age of Glass would treat us to something in the vein of Henge’s efforts the previous night but that also would hail from a different place at the same time.

Indeed, The Age of Glass describe their sound as “Hard hitting, bass driven, vibrant, live electronic dance-pop from another dimension.”

The crowd at the Seebühne stage swelled greatly from an expectant handful of revelers, clearly aware of The Age of Glass already, enticing interested passers-by to groove away in the sand, until there was a sizeable throng.

Ably assisted by a troupe of enticing and provocatively cavorting dancers, The Age of Glass put on a show that, without such direct and clear verbal messages as Henge, still got the Fusion crowd moving and dancing in a similar fashion. Mostly the vocals were distorted, effected, and seemingly not of this dimension, occasionally touching upon shamanic chanting.

The squelchy bass work of ‘People of the Party’, also married tight drum patterns and euphoric crystalline synths to lyrics which asked us:

“Are you ready? To bleed your mind
Turn in circles from the Devil enshrined

Are you ready? To hold your glance,
To blink just once could bring an end to the dance”

Whereas with ‘Feeling Away’, a simple three-note guitar pattern etched its way into the crowd’s awareness, which were then accompanied by vocals reminiscent of Jeff Buckley, before building and incorporating elements of both New Order and Giorgio Moroder.

All too soon The Age of Glass were finished, both they and Henge clearly needed elsewhere on the planet, to spread their messages of Love and Dance. 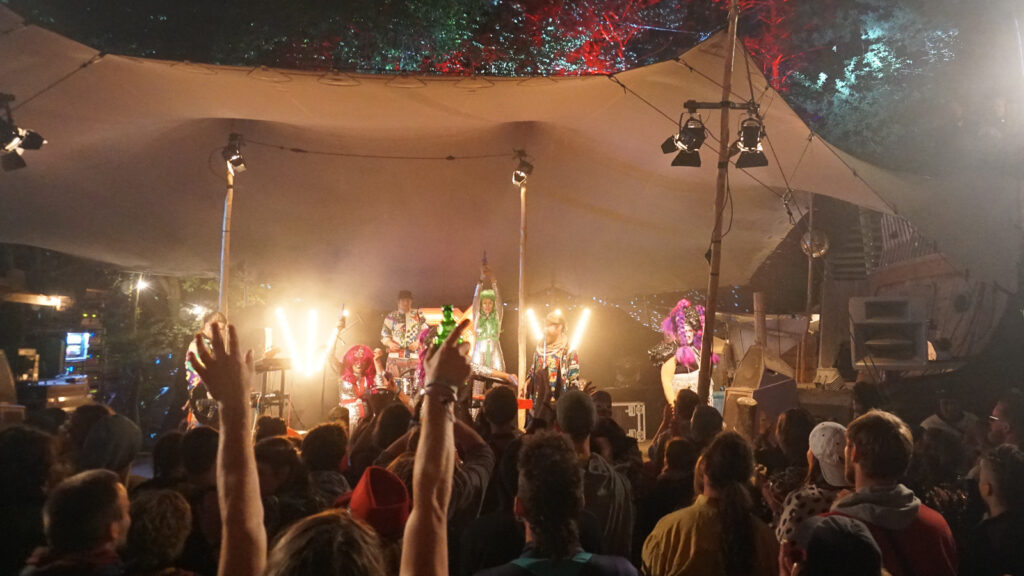 Exploring the mammoth festival site, we discovered that it was not only Greater Manchester that was represented here from the North West. Liverpool based radio station ‘BogFm’ joined the projection and visual collective ‘Projectile Vomit’ to install and curate a five-day toilet block takeover, where the strangest of music was played to people relieving themselves, whilst a cardboard cut-out Angela Merkel rolled her eyes when her chain was pulled.

Also hailing from Liverpool, the festival was rounded off for us by a welcome DJ set from one half of ‘The Chicken Brothers’. His partner in crime being on DJ duty elsewhere on the planet, Jamie treated the Cabaret Stage to a slamming set of their signature Ghetto Funk music. Marrying well known tunes to ridiculous slabs of bass, he helped to give us energy and get us moving, even when we thought we’d used our last.

Both Henge and The Age of Glass have a packed schedule of festivals where they can be seen this summer. Both bands will perform at The Beat-Herder Festival (happening as I write this), next weekend’s Bluedot Festival, and also Womad Festival (26th – 29th July). Henge will also play Wilderness Festival (2nd – 5th August), whilst Age of Glass will be at Audio Farm Festival (30th August – 3rd September).