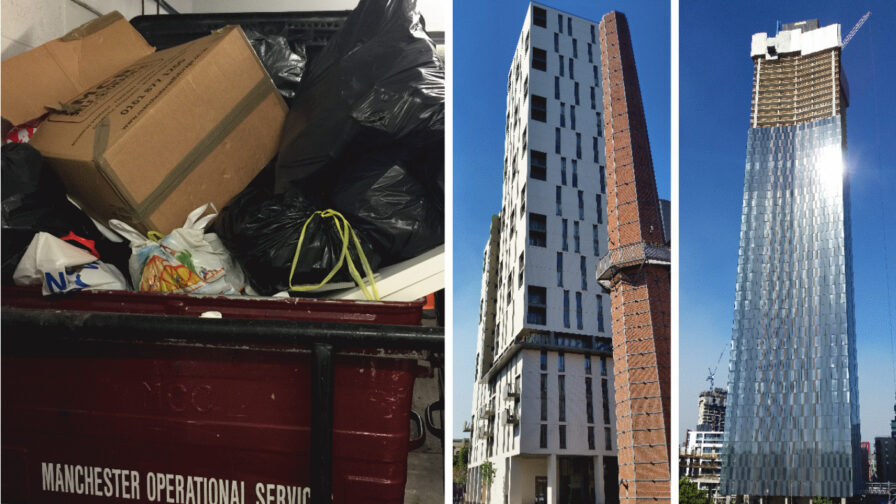 Stories on the threat of climate change, environmental protests against pollution and the government’s often hollow promises to address the issue seem to hit the news every day. Many will be relieved by Manchester City Council’s declaration last Wednesday of a climate emergency, to address the issues faster in the region.

In a city that is seeing a huge amount of high-rise residential blocks being built, data released by the council shows that the residents of these blocks are lagging far behind house dwellers in the amount of rubbish they recycle. Costing the earth in the deleterious effects of this waste on climate change and pollution of the environment, and by the council spending considerably more due to the greater expense of disposing unrecycled waste.

Statistics revealed by the councils, Neighbourhoods and Environmental Scrutiny Committee, show that managers of these blocks and the apartment dwellers have been lagging behind in their efforts to help reduce the amount of unrecycled rubbish they send to landfill sites and incinerators.

How big a problem is this?

People that live in houses in Manchester have a recycling rate of 50% of their total household waste, while apartment dwellers are only contributing 10% to the recycle bins.

This is a problem for the environment and the public purse. The cost of collecting general waste is £357 per tonne (p/t). It only costs £30 p/t for materials in the blue and brown bins and £55 p/t to recycle organic waste in the green bin. Currently Manchester has the lowest recycling rate across the ten boroughs of Greater Manchester, which means it also has the highest disposal costs. The estimated cost of waste and recycling in Manchester for 2019/20 is £63.6 million, which is 10.4% of the council tax budget. The council hopes to save half a million pounds from 2018 to 2020 by engaging the city’s apartment sector in recycling.

Using the figures for the cost of waste disposal and the amount of waste recycled provided by Manchester City Council The Meteor has estimated the costs and weight of general waste disposed per person per year in Manchester; using an average weight of 403 kg of household waste per person per year across England in 2017. The estimated annual extra cost to the council for disposing general waste per resident of an apartment block, compared to the costs of a house resident, is £74.70.

With a current city centre population of 50,000 and a projection of 80,000 by 2024, with most of the development being in the apartment sector, recycling by apartment inhabitants becomes even more significant.

[expand title=”WHERE DOES MANCHESTER’S RUBBISH AND WASTE GET RECYLED? CLICK HERE TO FIND OUT.”]

General Waste: Sent by rail to an energy recovery plant (combined heat and power plant) in Runcorn, where it is used to generate electricity and steam that is fed into the national grid.

Food and Garden Waste: Delivered to In Vessel Composting facilities (IVC). The IVC system harnesses the natural composting process to recycle into compost in 6 weeks. It is then used as a soil improver on agricultural land.

The council says some of the causes for these low recycling rates are: the lack of consequence to the resident of low recycling rates, the cost of recycling bins to apartment buildings, lack of space, cleanliness, and maintenance of bin areas, distance to and location of the bins, and a large tenant turnover making it difficult to change behaviour through education.

Composting of food waste is ignored in many apartment buildings. One possible reason behind this is fears about hygiene, as some apartment residents in Manchester reported feeling uncomfortable with the possibility of bad odours and insects.

What is being done to improve recycling?

Manchester City Centre Councillor, Jon-Connor Lyons, told The Meteor, that the council is implementing compulsory recycling  in the city centre. This will involve calculating an estimated amount for how much general waste a building should have, determined by number of residents, and then charging the building managers for any waste over that limit. He spoke of other councillors, in areas mostly made up of houses, who “were getting angry and saying that in their area the residents have to recycle but in the city centre it is not the case.”

Lyons also indicated the importance of education as indicated in a recent market stall, when people were asked to place items in the correct bin. He said that people were putting things in the wrong bin and that there were many misconceptions. The council has now distributed literature to explain what should go in which bin. They are also working with building owners and managers to increase knowledge, as well as emphasising personal responsibility in regards to waste disposal.

Incentives have also been explored to increase recycling, such as deposit returning bottle recycling machines at supermarkets, explained Lyon, who also wants to work with building caretakers to encourage the  use of social media, to help residents participate in recycling programmes. He also felt because of the transitory population, it was difficult to keep on top of education and so it must be ongoing.

More bins are now being distributed, at no charge, to building managers, with a potential to give residents small bins and bin bags to use inside their properties. The Neighbourhood and Environmental Team of Manchester are also speaking to building managers about positioning of bins.

Composting of food waste is ignored in many apartment buildings. This may be partly due to hygiene issues as some some apartment residents in Manchester reported feeling uncomfortable with the possibility of bad odours and insects due to the waste being kept in their apartments. Recycle for Greater Manchester are running a Bags and Caddies campaign to try and address the issue.

Food waste is a problem

According to BIFFA, Manchester’s waste disposal contractor, removal of food waste for composting is available to all apartment buildings. In response to a question about apartment recycling, BIFFA replied:

“An organic [food and garden] recycling service is available to all residents in Manchester. At apartments that do not currently offer food recycling, the building manager, caretaker, landlord or residents committee can contact the Waste, Recycling & Street Cleansing Team to request the materials required [a bin, leaflets, kitchen caddies and liners] and arrange a regular collection of the bin. This can all be done without charge.”

So it appears the provision is there, but to get building managers and residents to improve recycling rates it appears that further initiatives will need to be promoted

What other city centres do

Fifteen years ago, Ljubljana, capital of Slovenia, decided to commit to zero waste. They were putting all of their rubbish in landfill but by 2025 they aim for 75% to be recycled; they are using a number of initiatives to achieve this. In the city centre, where it is difficult to find space, underground containers were installed with entry cards issued to residents. Scheduled collections of general waste were halved, to force people to recycle. Door to door collections of biodegradable waste were organized. Bins were relocated making it easier to recycle, zero waste/no packaging stores, mandated toilet roll made from recycled packaging, collection of rainwater (to preserve drinking water), and reselling of used items.

Jennifer Maunder, Sr Executive Property Manager of Century Plaza, an apartment building in Toronto, commented that two bins are set up behind the elevators, one for organic items and the other for other recyclable items. Items in the second bin are than sorted later by the City of Toronto. Maunder also said:

“We do also have a recycling table, where residents are welcome to leave items that they feel someone else may benefit from. This ranges from electronics to books to housewares, etc., items that we want to try and keep out of the landfill.”

She went on to say, “we do not have any type of enforced policy regarding recycling nor any means of ensuring residents comply, we merely provide them the means, encourage them through continued communication, and hope that they will partake.”

What can apartment dwellers in Manchester can do to recycle more?

After investigating this story, and speaking to the people involved in disposing waste these are some suggested ways that could help high rise flat residents increase their recycling efficiency:

Just think about the benefits to the environment, the planet and the public purse that the little extra effort put into recycling waste could bring. And remember that this particular public purse is filled by council tax, so the money saved could be spent on our austerity hit police, fire and library services. Perhaps it could lead to a reduction in our council tax bill – but I wouldn’t hold your breath on that one.

Read: Manchester declares a climate emergency: what next?

Check out our homepage for our latest stories