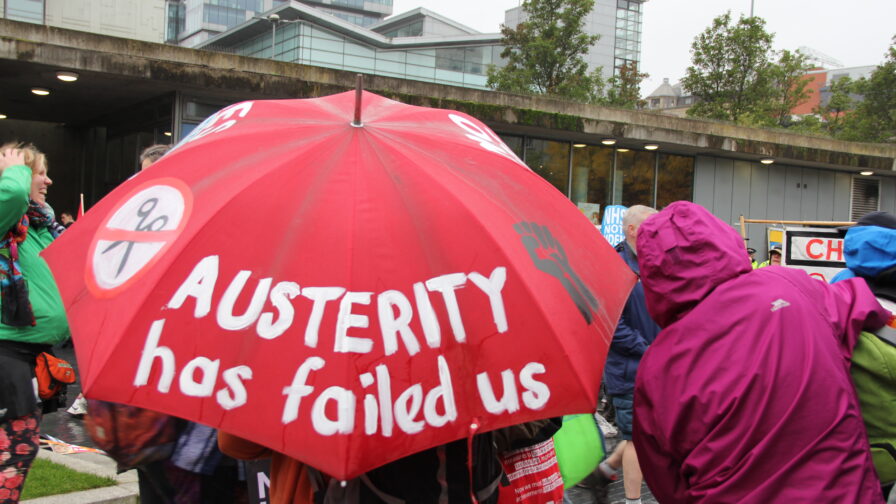 “Get off your arse and do something..” sang the Commoners Choir on Saturday night, at a Partisan pre-protest party entitled ‘Fuck the Tories’. The following day, an estimated 50,000 people got off their collective arse to demonstrate outside the 2017 Conservative Party Conference, under shared slogans of ‘No More Austerity’, ‘Scrap the Pay Cap’ and ‘Decent Health, Homes, Jobs and Education’.

This was just the beginning of the Take Back Manchester festival organised by The People’s Assembly Against Austerity, a week of events around the Tory Party Conference to protest the present and plan for the future. The week’s events included talks, theatre, film screenings, parties and public meetings around key issues such as housing, the NHS, workers’ rights and welfare.

Inside the Manchester Central Convention Complex, the Conservatives spent the week announcing policies around a range of issues including health, education, energy and housing. For each issue covered inside, a band of individuals and social action groups were making their position known on the outside.

On the issue of the housing crisis, Greater Manchester Housing Action (GMHA) was one of those groups, who attended Sunday’s national demo brandishing a banner stating “our homes are not your assets”. Later in the week GMHA partnered with Charlotte Hughes, author of a blog entitled The Poor Side of Life, to demand that the government halt the national roll out of the new welfare system, Universal Credit (UC).  The system was piloted in Ashton-under-Lyne with, according to Charlotte Hughes’s blog, catastrophic consequences. At an event this week entitled ‘Universal Catastrophe’, Hughes invited Conservative party members to visit the town’s jobcentre, the “Mecca of Universal Credit”, promising them “you will see people suffering like you’ve never seen before”.

One of the major concerns around UC is that it bundles housing benefits up with other payments such as jobseeker’s allowance, which when combined with UC’s minimum wait time of six weeks and reportedly erratic and arbitrary sanctions, puts vulnerable people at risk of losing their homes due to rent arrears. UC also cuts the total amount of money many individuals are entitled to, including those with disabilities or long term health conditions.

The activist group Disabled People Against Cuts made themselves seen and heard throughout the week, from demonstrations that led the arrest of group members on Sunday, to a wall of sound demonstration on the final day of the conference, opposing cuts for which the United Nations found the UK government guilty of “grave or systematic violations of the rights of persons with disabilities”.

Many of the instruments used in the demonstration had been hand made during free craft workshops inside the People’s Events Marquee. In an interview with the People’s Assembly, workshop leader Charlotte explained that arts and crafts can be a good way to start conversations with those who might feel put off by politics.

As would be expected from a Manchester based festival, Take Back Manchester saw an outpouring of DIY creativity, from makeshift instruments to an impressive gallery of homemade placards. 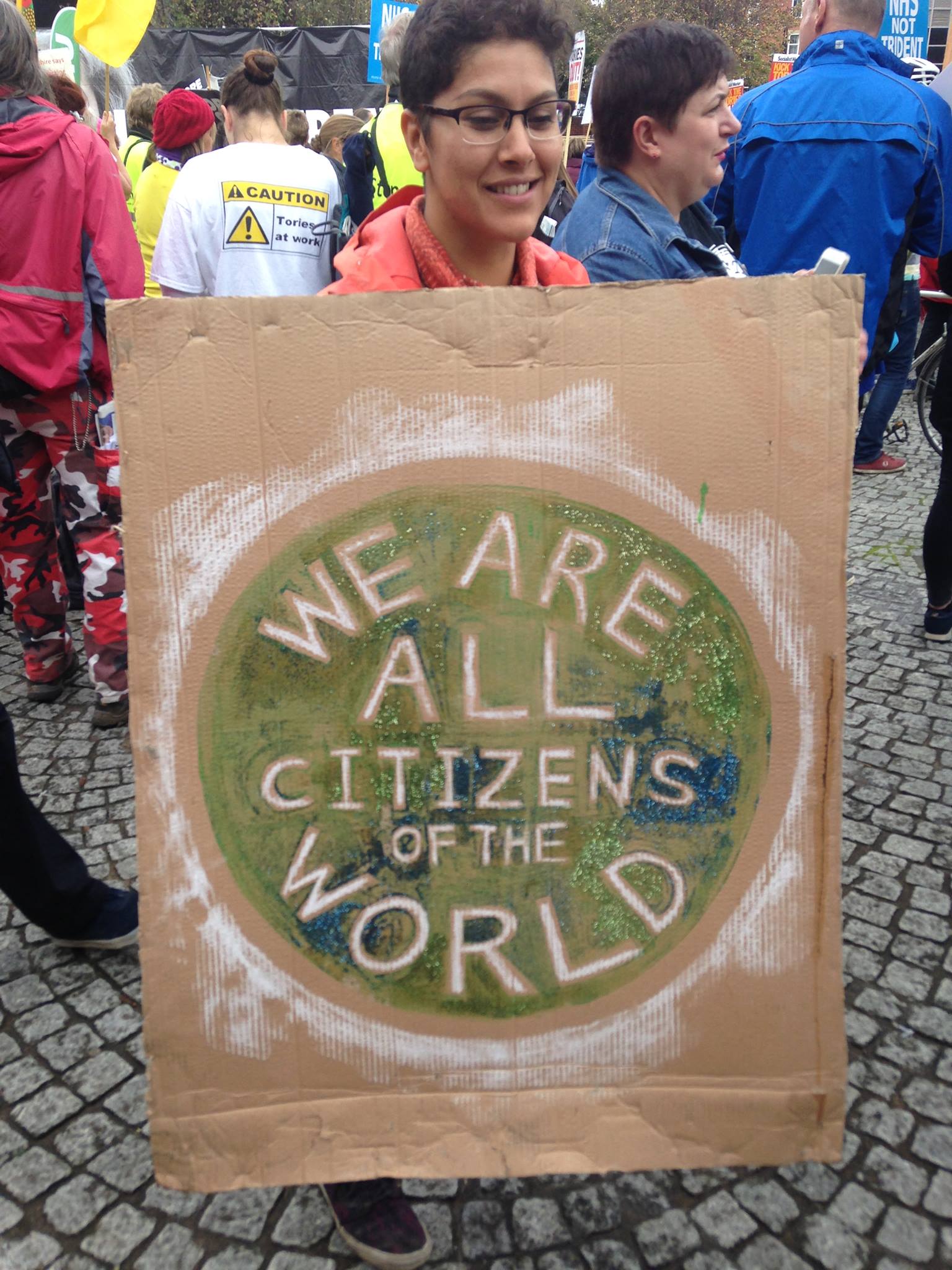 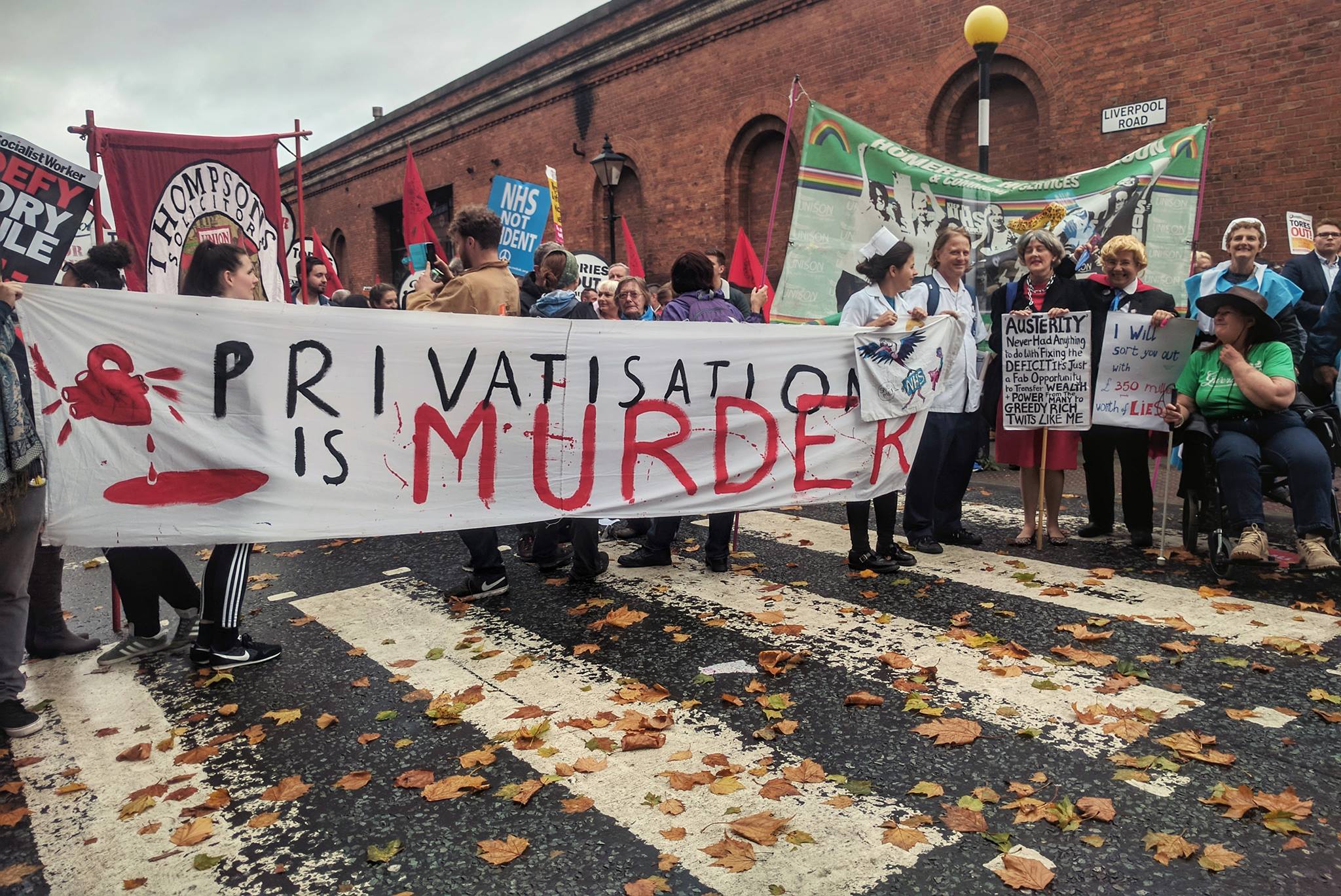 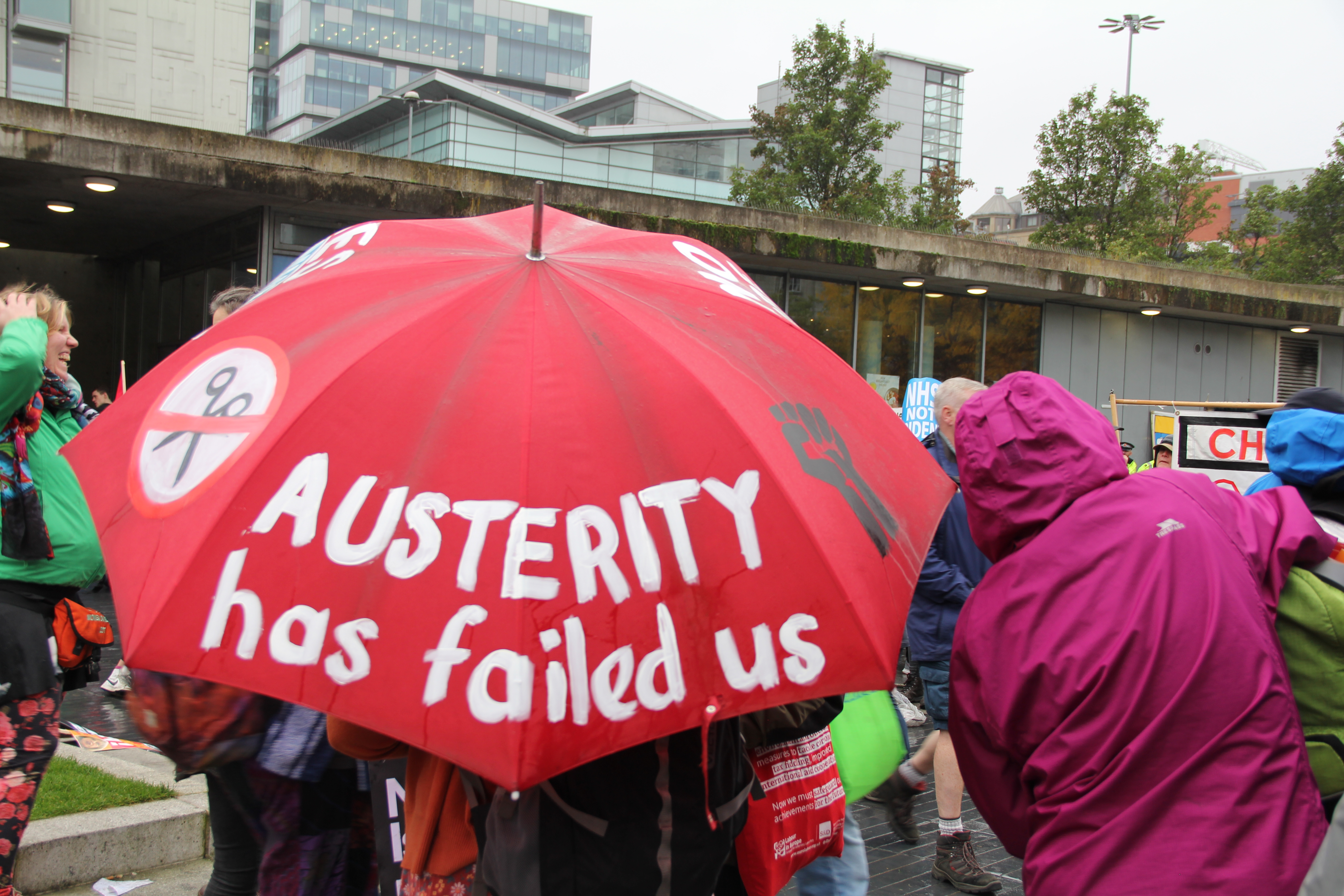 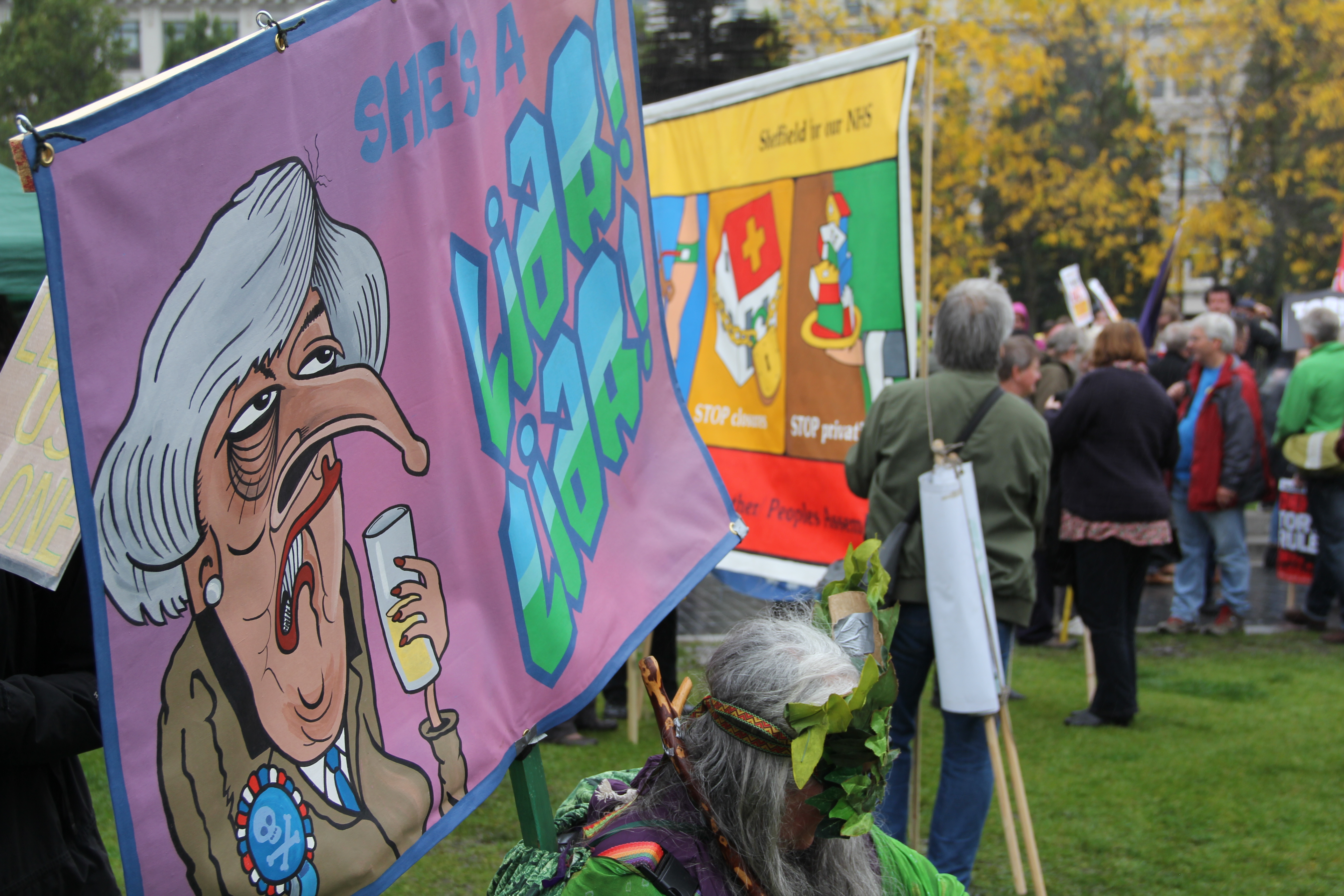 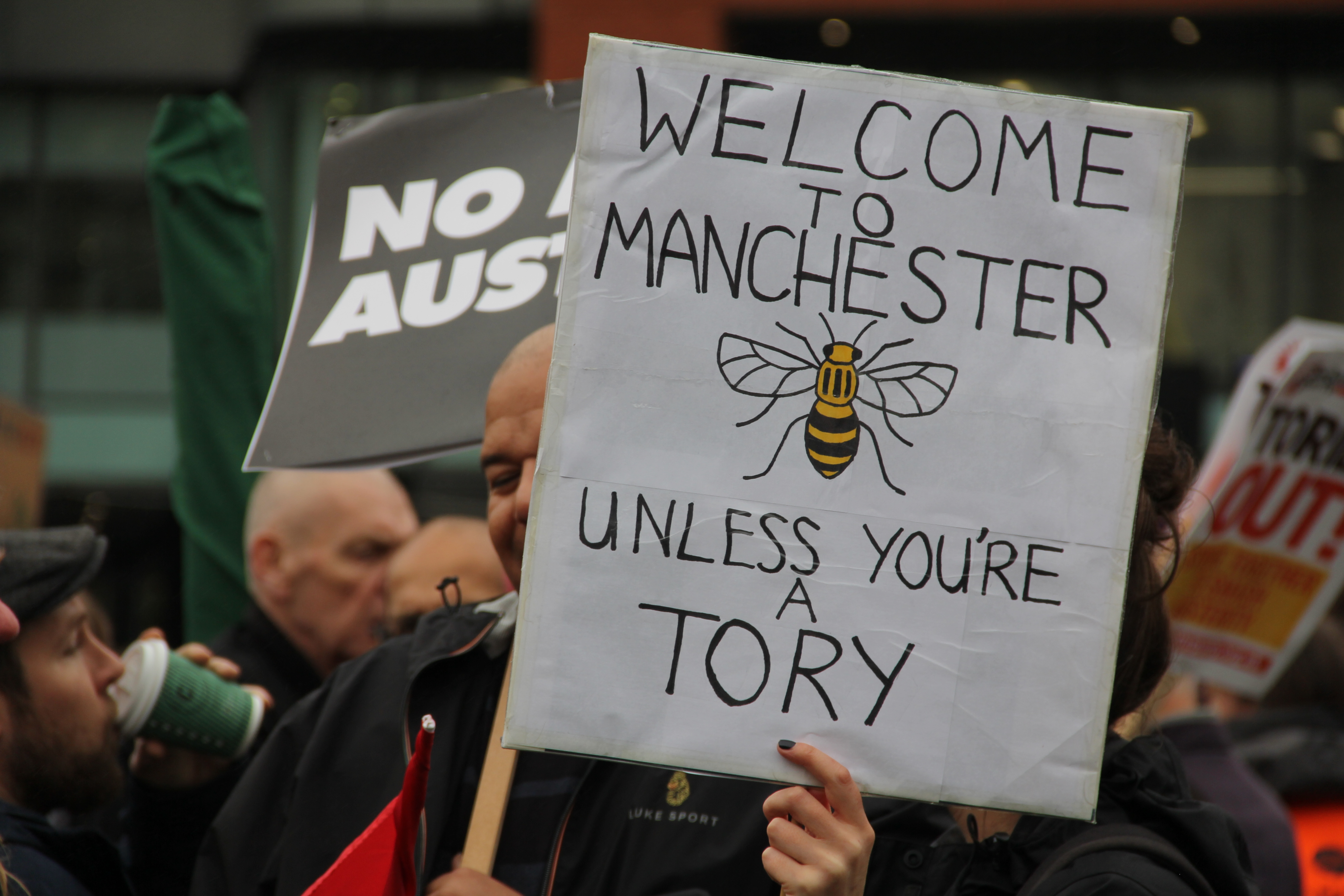 As well as hosting traditional choral protest music from the Commoners’ Choir, the festival embraced the latest generation of radical music. Sunday’s Official Demo After Party saw performances from Captain Ska and British hip hop artist Lowkey, whose recent singles include the incredibly powerful Ghosts of Grenfell. The song pays tribute to the lives lost and destroyed in the Grenfell tragedy and calls for “arrests made and debts paid” for what Lowkey describes as corporate manslaughter.

Addressing a packed out Manchester Cathedral on Monday, Shadow Chancellor John McDonnell spoke of the creativity he had witnessed in Manchester, drawing a stark contrast between the events taking place inside and outside of the conference walls.

“We call it socialism.” To rapturous applause.

This lack of creativity from the Tories did seem evident as a number of policies were announced throughout the conference, apparently inspired by the Labour manifesto. From student debt to organ donation to a cap on energy prices, a succession of diluted Labour policy announcements from the conference led Jeremy Corbyn to remind his Twitter following that “we are now the political mainstream”.

Discussion around a shift in, or a shift from, the mainstream, was also happening outside the conference in the People’s Events Marquee, during a public meeting about our changing media landscape, and the opportunities this presents for progressive ideas. Justin Schlosberg from the Media Reform Coalition was optimistic, stating:

“We are now in a stronger position than we have ever been”, and saw the growing distrust of the media by the public as a strength: “People talk about the decline in trust and so called fake news in purely negative terms. I think the more sceptical we are, the more questioning we are about all of our media, the better we will be in the long run.”

Having made their opposition known, those who want to see an end to Conservative rule have also been promoting what they want to see in its place. The People’s Assembly have laid out their vision for a fairer Britain in a statement entitled ‘In Place of Austerity’. In it, they demand an end to harmful cuts to the public sector, the re-nationalisation of services including the care sector, railways and Royal Mail, the protection of workers’ rights and an end to the racist scapegoating of migrants and refugees.

Compared with the last time the Tories came to town in 2015, the ground today seems fertile for these changes to take root and grow. With Labour moving from ‘party of protest’ to ‘government in waiting’ in the public eye, and the Prime Minister’s disastrous speech on the final day of her conference, the government is now looking weaker than ever, marking a pivotal moment for the anti-austerity movement.

The Conservative party have historically aspired to “get Britain working again”. It seems that for those who took to the streets in Manchester this week, the real work has only just begun.

Thanks to the individuals and groups who shared their content with The Meteor for our collaborative highlights video.