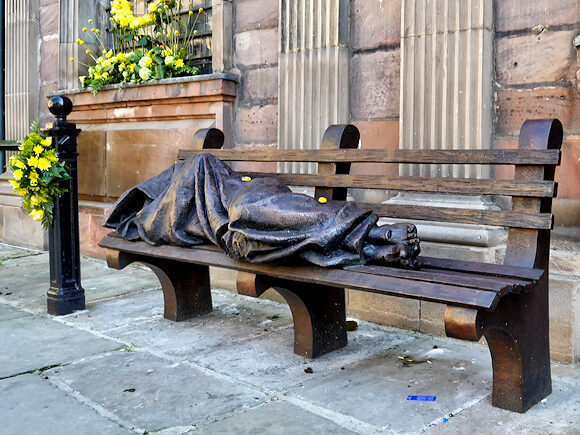 The progress made in housing rough sleepers during the pandemic is under threat as a post-pandemic Manchester approaches, with poverty and its attendant misery on the increase across the region.

Manchester’s lead councillor on homelessness alongside service providers Centrepoint and Mustard Tree believe homelessness is set to increase as we emerge from lockdown.

A remarkable outcome of the pandemic lockdown last March, was the housing of the majority of rough sleepers in the city. The Everyone In scheme funded by central government and enacted locally, saw many rough sleepers provided with temporary accommodation during the initial stages of the viral crisis. What had seemed an impossible task prior to the pandemic had become a reality, due to the newfound political will and emergency funding.

But, there are widespread fears that the gains made for rough sleepers during lockdown will disappear once the pandemic is brought under control, and that many more individuals and families will be at greater risk of homelessness, in its various guises.

Councillor Luthfur Rahman OBE, Manchester city council’s lead member on homelessness, says the “focus has been on rough sleepers but the impact on families in insecure accommodation is often underestimated.”

The millions handed out to councils during the lockdown last year may have reduced rough sleeping but they did not end it. Sadly, John Wrench a 25 year old homeless man with learning difficulties died in front of the Marks & Spencers in central Manchester just last month. Tragically John had been offered help and accommodation, which he refused, shortly before his death.

Rahman believes that as the vaccination programme eases us out of lockdown we should be paying extra attention to those at risk of losing their homes and those already homeless, and that, “short term temporary solutions do not solve systemic problems which are the root cause of homelessness”.

With the original £32 million handed out to councils in March 2020 for the Everyone In scheme, designed to house rough sleepers, and an additional £105 million added to the homeless fund in June 2020 by the central government, Manchester city council was able to work towards a model of prevention, not intervention in tackling homelessness.

But risk factors are escalating, according to campaigning organisation Greater Manchester Poverty Action (GMPA). They note that the poverty level in Greater Manchester was already one of the highest in the country before the pandemic but their Poverty Monitor 2020 research disclosed startling statistics.

The Poverty Monitor report also shows in 2020 there were 200,000 children living in households with an income below the poverty line and 157,000 households experiencing fuel poverty.

The GMPA report highlights the scale of the need for support for struggling households during the pandemic and Rahman says Manchester city council have welcomed the support for the Everyone In programme along with extra short term government funding that was provided to help over the winter period, as well as funding for A Bed Every Nightaccommodation from the Greater Manchester Combined Authority.

But Rahmans concern is that there is not enough concentration or discussion on long term solutions to homelessness, which is likely to increase due the rising levels of poverty and unemployment.

“A huge amount of work goes on daily to prevent people hitting a crisis point…. Sustainable solutions are needed, and people given a fair deal when it comes to supporting lost income or a loss of employment. We are concerned this will drive the next wave of homelessness and we will continue to lobby the government on this.” Says Rahman.

During the considerable upheavals of last year Manchester city council, made progress with their programme to combat homelessness. The Everybody In scheme in Manchester accommodated 550 people in 2020 and 325 people were also helped to find or maintain stable accommodation during that tumultuous year.

Alongside accommodation the council also enabled mental health and substance abuse services for homeless people. As time passed, organisations became more proficient at working in a Covid safe way, allowing a better response to vulnerable people, but they were still constrained by lack of resources.

Rahman, who wants to get to the point where homelessness is primarily tackled through prevention rather than intervention, says:

“The reality is that demand for suitable accommodation will always outstrip availability… with the moratorium on eviction notices coming to an end in the spring alongside the economic uncertainty, potential job losses and financial insecurity there will inevitably be a fresh wave of homelessness caused by the financial pressures on families.

“Even before the pandemic we know that economic uncertainty was a key driver of homelessness… we know through colleagues in the Manchester Homelessness Partnership that many people have been contacting support services due to the real risk of losing their home.”

Manchester charity, Mustard Tree, recognises Rahman’s concerns. Jack Barton, Mustard Tree Fundraising and Communications Manager, says that they are expecting a huge rise in need for their services over the next few months.

“2021 should see the end of the [pandemic] health crisis, but it’s also when we expect to see the intense economic hardship begin”, says Jo Walby, CEO of Mustard Tree. “The end of furlough, the end to the moratorium on evictions, people in hotels and hostels living in constant limbo. All this, coupled with the thousands being made redundant…..we are paying people’s rent arrears for the first time ever – just to keep them from being forced to leave their homes.”

Mustard Tree work with those in poverty with employment training, as well as vocational and creative courses, but due to the pandemic they have had to adapt their focus to help with accommodation, as well as food and furniture distribution. They have found that here is a need for critical support with people, that never thought that this would happen to them, having to sleep on floors in unfurnished apartments and being unable to cook for their children without basic appliances. They have seen increased demand for the Mustard Tree Food Club, which allows struggling clients to purchase up to 10 items, such as vegetables, meat, and fish for £2.50. Barton says that “at the height of the 2020 lockdown, the number of people Mustard Tree supported with access to food grew from 500 a month to 1000 a week.”

Mustard Tree have also detected a deterioration in client mental health due to them not being able to access the normal drop-in support services, due to Covid restrictions.

Centrepoint Manchester, a charity for homeless 16-25 year olds, have found that the number of young people calling their helpline doubled during the first lockdown. Paul Noblet, head of public affairs at Centrepoint, said:

“Last year, Everyone In ensured local authorities and charities had the resources they needed to provide Covid-safe accommodation….it’s clear more needs to be done to keep rough sleepers safe over the coming months.”

“Councils and charities were already struggling to cope with the volume of those facing homelessness due to the pandemic and so, with the cold weather and continued unemployment rates, central government must make a fully-resourced return to the initiative that worked so well in the first lockdown.”

What can be done?

Councillor Rahman suggests that “anyone struggling with debt management, welfare benefits or housing … to ask for help before crisis point is reached [and] access independent legal advice directly from the council’s partners Citizens Advice Manchester or Shelter … I would encourage everyone who want to help people break the cycle of homelessness ….to donate to charities such as Manchester’s Big Change Fund – which provides funds directly to help people set up their own accommodation such as deposits or rental bonds.”

Centre Point told The Meteor. “Increasing Universal Credit by £20 a week was the right decision at the start of the pandemic, and it will remain a lifeline for millions until the pandemic ends. In the longer term we also need to assess the rate of benefits overall as it is still the case that if you are under-25 you cannot claim the same amount of Universal Credit as your older peers, leaving many of the young people we support at Centrepoint with the same living costs but with less money to meet them.”

At Mustard Tree, they have been relying on support from individuals, corporations, and community supporters which has allowed them to continue their programmes along with restarting the Food Club delivery service which assists people that are isolated or in temporary accommodation. Barton feels, “that with this level of support behind us – we might just have a chance.”

Councillors and service providers fear homelessness will increase as we emerge from pandemic lockdown restrictions.
Manchester city councils aim to get to a point where homelessness is primarily tackled through prevention rather than intervention depends on the willingness of central government to provide substantial and long-term funding to combat homelessness.

Information on homelessness services and how you can help: