Lithuania stands with Ukraine: “our argument is with Putin and his generals, not with the people of Russia” 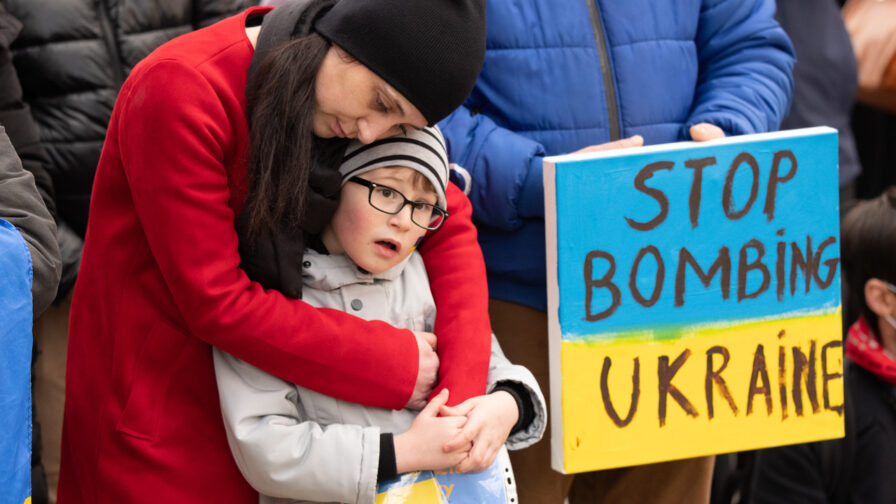 Lithuanians are fighting back against Russian propaganda, sharing reputable news sources to Russians blocked from hearing the truth by state-controlled mass media.

In 1999 I was working in Macedonia covering the crisis as hundreds of thousands of displaced people poured across the Kosovan border due to the war. Within a large refugee camp on the Macedonian border I took a picture of a young girl drinking water from a standpipe guided by her mother’s hand.

The picture was subsequently used as part of a campaign to raise funds from the people of Manchester to help those that had been forced to leave their homes with little more than the clothes they stood up in.

More than twenty years later I am in Lithuania visiting my wife’s family and friends where the current state of national emergency, triggered by the war in Ukraine, has bought back memories of the Soviet repression Lithuania suffered during the years of post war occupation.

Wherever we are in the world now, we can all bear witness to the horrors of war. As we watch on television, or via social media, Ukrainian cities being pounded by Russian artillery and rockets, creating a river of human misery flowing towards the Polish border, brings back chilling memories to all but the young. Speaking to my father-in-law, Romas aged 74, in the Lithuanian port city of Klaipeda, he explains:

“We suffered Russian occupation for 46 years after the war until our freedom in 1991. I was only baby when they started to deport Lithuanians to Siberia but my mother told me how she had toflee with me in her arms to stay hidden in the woods to save us being captured. Unfortunately some of my uncles did not escape and were deported and perished in the harsh conditions inSiberia. On January the 13th 1991 Russian Tanks tried to suppress our protests for freedom which had grown over the years, and 14 Lithuanians lost their lives”.

He adds “today we see the Ukrainian people facing a similar but worse fate and we must stand with them. The current tragedy in Ukraine is our tragedy of the past and is felt by Lithuania and all the Baltic countries but our argument is with Putin and his generals not with the people of Russia.”

Lithuania has strong historical ties with Ukraine which dates back hundreds of years and throughout the country Yellow and Blue flags and Ribbons now adorn buildings and bridges. The city of Vilnius, the Lithuanian capital, has even renamed the street leading to the Russian Embassy “Ukrainian Heroes’ Street” forcing the official address to include this message of solidarity with the besieged nation.

These may be small gestures, from a small country, its population is less than Greater Manchester, but as a neighbour to the Russian enclave of Kaliningrad, which houses the Russian Baltic Navy and nuclear capable Iskander and Kinzhal missiles, it shows a certain determination of spirit.

With my wife, Vilija, we spoke to her childhood friend, Gitana, aged 36, who comes from the Eastern Coastal Lithuania town of Giruliai. She recalls childhood memories of Russian Tanks surrounding the local TV and radio communication tower in 1991. She remembers her mum telling the children that they were not allowed outside as Russian Tanks and soldiers were on the streets. Gitana says:

“The young people of Lithuania both at home and those abroad are mobilising now using social media to support Ukraine. Under Russian control we all had to learn the Russian language at school, which has given us a powerful weapon to use in the information war. Using all forms of social media we are communicating with people in Russia sending them reports from media sources Lithuanian, British, American and many other countries so they can see an alternative to the Russian state media.”

Gitana adds, “As the Russian state is trying to block social media we have adapted and are leaving reviews and comments on Russian restaurant review and Russian travel sites, dating sites anywhere we can post messages and photographs which show what is really going on in the Ukraine.”

She urges anyone who has access to the internet to access any Russian sites to leave photographs and reports from reliable media sources so that the people of Russia are not restricted to the propaganda coming from the Kremlin.

The Lithuanians fight to disperse information, on the Ukraine conflict, has snowballed to be so effective that Lithuania’s Ministry of Defense has recommended it as an alternative to young men eager to join the fight to defend Ukraine but who lack the military experience necessary to do so.

Those that are fighting the information war are known as the “elves”, and number in the thousands, and although most keep their identities secret, they include bartenders, doctors, students, businesspeople, and at least one member of the Lithuanian parliament.

Vilija, 36, has adopted Manchester as her home and says that the atmosphere in Lithuania is understandably fearful because of the history but sees the same strength of spirit in her country that she witnessed when Manchester recently faced the atrocity of the Arena bombing.

“Manchester has a real strength of spirit and togetherness which is the only way to survive such adversity” she says. “My Lithuanian friends both in the UK and in Lithuania feel so much empathy with the Ukrainian people and I am so proud to join the protests in my adopted home city with the people of the Manchester sending a message that this war is so wrong.”

For those that wish to offer aid to Ukraine in these desperate times please visit the Manchester Ukrainian website, to make donations or offer help with refugees and sign the petition.

Many Ukrainians may be struggling to comprehend, at this darkest of times, how they will emerge from this crisis. I hope this reflection on a refugee’s story can help. I recently tracked down the little Kosovan girl I photographed in the refugee camp in 1999 with the help of social media. Her name is Leonora Kozmaqi she returned to Kosovo and after graduating from Pristina University became a manager in a technology firm. She recently appeared on Kosovan TV to speak about her experience as a refugee and the kindness she received from strangers.

The Fee for this article is being donated to the Help Ukraine Emergency Appeal.

You can find the Help Ukraine Emergency Appeal here.