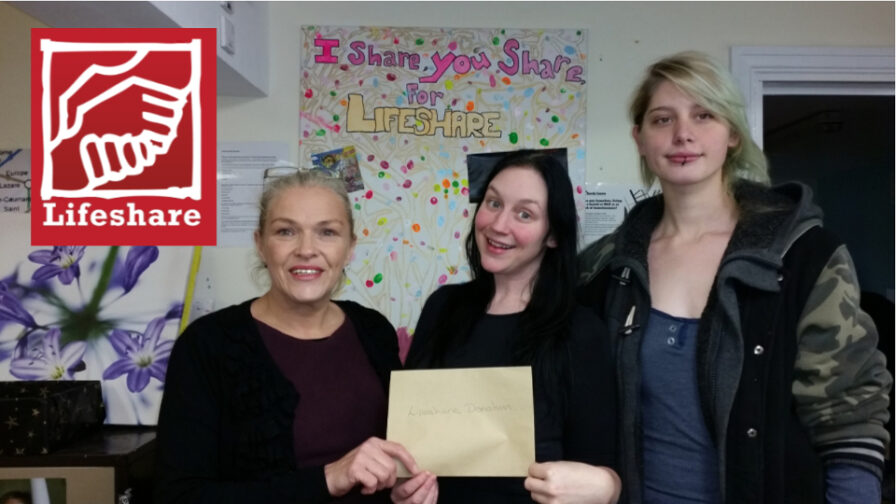 Manchester homeless charity Lifeshare is in need of a new home due to the controversial development plans for Angel Meadows. Up to 756 private rented sector apartments will be built there under the control of an offshore tax haven registered company called Far Eastern Consortium International Ltd. Due to the development, Lifeshare’s home for over 30 years, the Charter St Ragged School, has to be vacated by New Year’s Eve. They are still desperately raising funds to find a new home in the city centre to replace it, and local housing activists are stepping in to help.

Lifeshare helps to meet the needs of the increasing numbers of homeless people in Manchester and Salford. Its volunteers go out onto the streets to speak with the homeless and offer them practical assistance, information and support. The Ragged School caters for weekend breakfasts to the homeless all year round, and provide a Christmas Drop -In Service. Over Christmas the School is open from 8am to 8pm, offering a wide range of supportive activities during a season that is particularly hard on the homeless. All this is at risk at a time when Manchester has an increasing need for these facilities due to rising homelessness and a glut of private rented sector flats in the pipeline.

Bringing them one step closer to that home, activists from Greater Manchester Housing Action (GMHA) presented Lifeshare with £800 collected (so far, see details below) at a Night at the Circus fundraiser held at The Old Pint Pot in Salford. Josie Salmon and Saffrone Kidd, from GMHA, presented the money to Lifeshare last Wednesday. Salmon described how they had heard about the kitchens at the Charter St Ragged School being closed down, saying it was:

“Absolutely awful and shouldn’t be happening. Especially for luxury apartments that we don’t really need at this time, with so much homelessness going on.”

Lifeshare’s work helping young homeless people was a big motivating factor for both activists, and Kidd also described why she felt a particular affinity for Lifeshare:

“It’s something that resonated with me due to experiencing homelessness myself.” She went on to describe how she had been homeless until “fairly recently, in fact I get my place tomorrow; this is my last day of being homeless.”

Wednesday 27 November was also the day that the six-in-one Universal Credit payment was rolled out across Manchester, which is particularly significant for young homeless people. New unemployed claimants aged 18 to 21 with no children are not eligible to claim the housing costs elements of Universal Credit. Lifeshare previously described the new system as setting up homeless and vulnerable people “to fail”.

Judith Vickers, operations manager at Lifeshare, gratefully accepted the funds raised from the GMHA benefit event, and described the uncertainty facing the charity’s Ragged School base:

“Our last breakfast should be the 31 December this year. That’s the last breakfast to clients. Then it’s a matter of cleaning out and going, but we don’t know if we have anywhere to go to.” The move was particularly galling for Vickers as “we had just got our bit in the building right, our showers right, everything perfect for our clients, just how we want it. And then we were given the relocation.”

Vickers was disappointed with the contradictory moves made by the Angel Meadow developers, and the poor communications, saying:

“At first we were told that the Far Eastern Consortium had bought the car parks next to the building, and approached the Charter trustees [building owners], saying that if they evicted the tenants by June 2017 and let them use their buildings as a site office, they were going to do x, y and z on the building; they promised them the world. Then they withdrew that offer and said they were only going to get [Section] 106 money from the planning permission for that building [Ragged School],

A viability clause, introduced by the Tory-led coalition government, undermines Section 106 agreements and allows developers to wriggle out of paying some or all of the money by claiming that they will drop below a 20% profit margin if they do; often highly inflated estimates of the costs involved are used by the developers. Manchester City Council has a particularly poor record of making these Section 106 agreements stick regarding getting money towards affordable housing.

Vickers says Section 106 agreements have been agreed for work on their building (£100,000) and for the rest of the Angel Meadows development (£150,000); none of that money has been made available to Lifeshare (or affordable housing) to recreate the amenities at the Ragged School, possibly terminally disrupted by the development. Vickers says:

“My argument is that [Section] 106 money is to go towards services that are lost to a community. So £100,000 to the mission [building owners] would probably not pay for a new roof on that building, never mind the electrics and all the other things that need doing… and the £150,000 for the upkeep of the meadow: well, the yuppies who are going to be moving in, they are not losing anything, they are gaining a meadow, so to me that just doesn’t seem fair.

“Section 106 money can take years to come through, so what’s going to happen to the building now that they have asked the tenants to leave? The building’s not got an income coming into it, you know, there are big concerns [about] what is going to happen to that building. It’s going to cost £2.5 million to £5 million to bring that building up to absolute singing and dancing spec. We would like to work with [the chartered trust] as community partners to raise the money and keep the building for supporting the marginalised”.

So unless there is a change of heart, and Lifeshare are allowed to stay, the search continues for another building to replace The Charter Street Ragged School, from which Lifeshare have been helping the homeless for the last 30 years. And perhaps the end of a long history of providing support for the poverty stricken in the area, as the original Charter Street Ragged School and Working Girls Home was established there in 1892.

The new Lifeshare building needs to be within 1 mile in any direction of the city centre, to best serve the large numbers of rough sleepers in the area. Vickers says the search is proving difficult as the places they have approached initially have been to expensive, or the landlords are unwilling to have the homeless in the building.

You can still donate to support Lifeshare through the GMHA arranged Night at the Circus fundraiser by JustTextGiving – simply text the code LSUK00 followed by the amount you wish to donate – £1 or £5 or £more – to the number: 70070

Details of the next fundraiser for Lifeshare can be found in the flyer below: