Kinofilm Festival shorts are expanding the boundaries of cinema 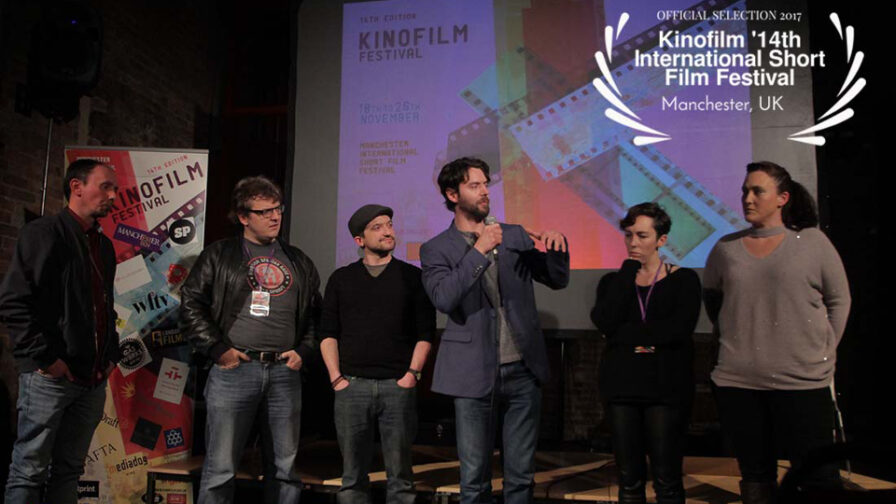 The Meteor has been in attendance for every step of the short films and animation Kinofilm Festival. The films may be short, but they are packed full of quality cinematography, acting, production techniques and exceptionally creative story telling you would struggle to find in the comparatively straight jacketed world of long form cinema. The festival has put together an eclectic mix of films spanning the globe (and beyond), which delve into every genre. Screenings continue,at venues across Manchester, until Sunday the 26 November.

The Meteor was over the moon to be invited to the opening gala of the 14th Kinofilm Festival at the Odeon, Great Northern, last Saturday. The evening started off with the obligatory red-carpet photoshoot. In attendance were celebrities such as ex-Coronation Street actress Denise Welch with her husband Lincoln Townley. A Shameless reunion in the form of a trio of actors in the shape of Jack Deam, Jody Latham, and Mark Vanhendrijk also graced the carpet.

The six films shown on the night exhibited a strong theme of death and suicide related to mental health issues, which turned out to be a serendipitous link between them. Steve Balshaw, the programme manager assured us this had not been a conscious decision on his part.

Welch and her son Louis Healy starred in Black Eyed Susan. The film starts with a shot of the yellow and black flower of the same name, generally seen to be a symbol of justice. This was a fitting choice considering the project was funded from money Welch was awarded after getting hacked by the Mirror Group.

Welch explained in the Q&A after the film that she had suffered from severe post-natal depression after the births of her children. The depression had stuck with her in the years following. The lack of accurate depictions of depression on film was also a strong driving force behind wanting to share her experiences and get the film made. Welch wanted to make it known that depression can strike anyone at any time, regardless of situation. Her character lives in a seemingly well to do neighbourhood, but the opulence of her surroundings are no shield from the tortures of her mental health issues.

In the film her son, played by her real son Healey, represents her depression as a physical manifestation of it. A role helped by Louis having witnessed Denise’s depression first hand as he grew up. Denise told us she “wanted to be a part of a mental health film which could help other people.” Black Eyed Susan will air again at the festival on Saturday the 25 November as part of the British New Wave programme.

A story about a father and son’s relationship told through their shared passion for Manchester United Football Club, is the subject of The Spirit of ’58. Leading up to the 1999 UEFA Champions league final between Manchester United and Bayern Munich, it gradually becomes clear that the father is not well, and that they struggle to discuss their feelings and emotions. The father and son are touchingly played by Jody Latham and Mark Vanhendrijk respectively, and skilfully directed by Patrick Nicholls. Talking after the film, Latham, Vanhendrijk and Nicholls explained how the film also represented hope and carrying on in the face of adversity. Latham’s character in the film talking of his father says: “He’s still not right yet, he’s just getting on, you know how he is.”

Strong familial ties are aparent between the characters in the film, and are also present between the film makers and the actors and locations used. All of the locations are very personal ones to Nicholls the director, who was also writer and producer, for instance the bar man is his real life cousin.

Hannah Pike’s Hit & Run is a poignant tale of a desperate alcoholic, played by Jack Deam, who cannot even get his suicide right. The film starts with two failed attempts. His car isn’t air tight when he tries to gas himself and he’s beaten to the punch by a “fucking scouser” on top of a bridge, preventing him from jumping. The use of black humour in the film is great, lightening the tone a little, even as the characters are going through traumatic experiences. When Jack’s character points out that dropping into the water would be more effective, the ‘scouser’ declares: “I don’t wanna get washed up in fucking Congleton, I don’t know anyone there”

The Northern Soul influenced sound track is right on the money, helping to shift the narrative of the story along, with I’m On My Way by Dean Parrish fitting perfectly.

Monday’s programme saw The Meteor drop in on the North West Film Archive session. A rare chance to see footage from their collection, the archive was started 40 years ago as a research project which then became a search and rescue mission as the transition from film based media to vhs meant lots of films were disposed of. Many films in their archive were literally saved from skips.

One such example was Manchester Took It Too. The film was made in 1940 when the blitz came to Manchester. Funded by the Co-op, it portrays both the destruction of the buildings, and the fighting spirit of the inhabitants of Manchester. Northern humour showing through in the voiceover, Manchester having been ‘remodelled according to the German ideal of beauty.’

A particularly challenging film shown as part of the Made up North programme was The Truants. In echoes of the Jamie Bulger case, two children wag off school and bully an easily led man with learning difficulties, leading to a harrowing ending. The portrayal of their exploits is incredibly realistic, as is the bleakness of their surroundings, leading to very uncomfortable viewing.

In the Made in Manchester programme an impressive selection of short films from local talent was screened, projecting a very flattering light on the film making ideas and skills on offer in the region. One of The Meteor’s favourites was Down and Out, the story of Billy (played by Tommy Jessop) a man with Downs Syndrome who absconds from his restrictive family home to visit his brother Danny (Christopher Faith) in Blackpool. An initially heart warming reunion between the two brothers develops a heart rending twist as the plot proceeds. The abuse Downs Syndrome people receive throughout their lives is depicted in the opening scenes when Danny’s girlfriend Michelle (Mia Vore) glances round from the slot machine she is playing. Seeing Billy staring at them she says “Who’s that retard”.

Christopher Faith taking part in the Q&A after the programme described how the portrayal of Downs in the film mattered to him due to his own family’s experience, where one of his Aunties had experienced a lifetime of abuse due to the condition. He also memorably described the quick in – get the job done – out nature of short filmaking as being akin to a “bank robbery in Wythenshaw“.

Two other films that stood out in an impressive Made in Manchester programme were Stag Do, which if you suffer from claustrophobia will probably give you nightmares for years to come. The other called Occupied was shot mainly inside a toilet cubicle and gave a terrifying insight into what it might be like to be caught up in a terrorist incident.

Kinofilm Festival 2017 is today in its second full day of programming. Highlights include Sci-Fi and Fantasy hosted by Johannes Sjoberg at the University of Manchester, 3 Minute Wonders fittingly held at 3 Minute Theatre, and some welcome humour injected into the proceedings with the Comedy Shorts programme.

The KinoFilm Festival is silver screen proof that the phrase small is beautiful is right on the mark. Don’t miss out on experiencing these compact beauties by checking out the screenings which continue, at venues across Manchester, until Sunday the 26 November.