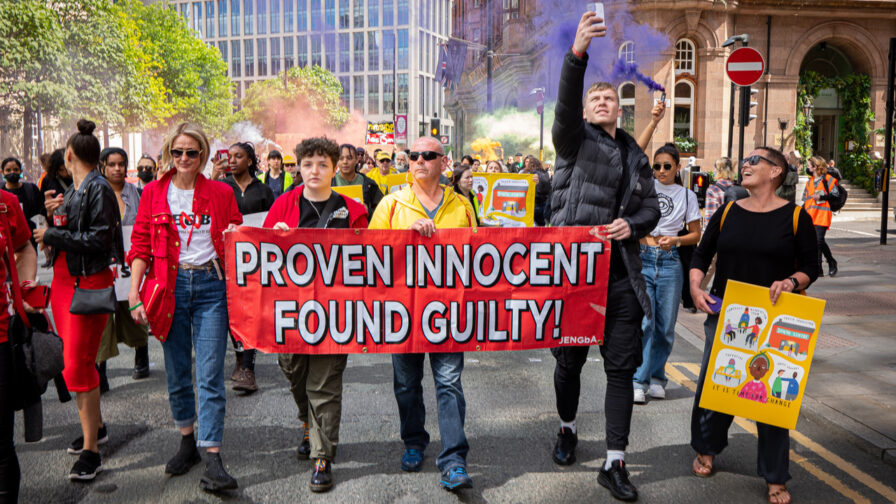 Family members and friends of ten young black men from Manchester found guilty of conspiracy to murder and GBH, were amongst the campaigners gathered in St Peters Square on Saturday calling for “justice not jail”.

The event saw speakers from campaign groups Kids of Colour and Joint Enterprise Not Guilty by Association (JENGbA) addressing the gathered crowd about the injustices they believe the ten convicted young men are being subject to by this case. Family members and friends also gave emotional testimonies about the case and its devastating effects on them and the lives of the young men currently in prison on remand, awaiting sentencing.

It was the death of one of their friends John Soyoye, 16, who was killed in Moston in 2020 by a group of seven men from Rochdale and Oldham who have been convicted for the crime, that led to the ten young men from Moston being charged by Greater Manchester Police (GMP) and accused in court of being involved in planning a revenge attack.

Six weeks after Soyoye’s death, on Boxing Day 2020 a machete attack was carried out by three men on a victim in Rochdale, who was also hit by a car the prosecution alleges was driven by Kalmuda and Thomas. Two of the men charged, Harry Oni and Jeffrey Ojo, pleaded guilty to grievous bodily harm with intent, but denied conspiracy to murder. The other defendants denied both charges.

The evidence presented by the prosecution to the jury to support the case included messages from social media between the group members and drill rap lyrics created by one of them, all created in the aftermath of the death of Soyoye.

A key contention by the prosecution in the joint enterprise case is that the ten were members of a Moston based “gang” called M40. Director of Kids of Colour Roxy Legane, taking issue with the gang description, said in St Peter’s Square that this was “a miscarriage of justice” and that:

“A few boys were caught on CCTV for their offences, and they [GMP] used that to bring in a much wider net of young boys who were just speaking out their grief in a Telegram chat after they lost a friend.”

“It used the offences of a few to draw in a huge net of young people, and it used drill music and YouTube videos and rap lyrics, and the fact that some of them are just friends and know each other, to say that this must be a gang, and of course it used the fact that they are black… because this would not work if these young people were white.”

Jan Cunliffe is a co-founder of JENGbA, who spoke to the crowd of her sons experience of being convicted of a crime that was carried out by his friends. Jordan Cunliffe when he was 15 years-of-age and registered blind was convicted of the murder of Garry Newlove in 2007. Jordan did not deliver the fatal blow, but was given a life sentence for murder due to the argument put forward in court that he might have known what his friends would do. Jan Cunliffe spoke of her fears for the ten in Manchester, “we have ten young people who between them will probably serve a hundred years in prison.”

Following speeches in St Peter’s Square, the people gathered marched to the steps of Manchester Crown Court, accompanied by the PCS Samba Band, and chants of “Justice not jail” and “No justice, no peace” from the marchers. Gathered in front of the court steps the crowd were addressed by friends of the ten convicted men, and Taiwo the mother of Ademola Adedeji, one of the convicted men.

Roxy Legane, speaking to The Meteor at the end of the gathering, said:

“We’re here largely to challenge an extremely racist and classist justice system, that is stealing young boys and girls from our communities… and today we’re here particularly for ten boys who were taken from our community, and most of them didn’t commit the offences. We believe that there are alternative approaches to these kind of harms.”

All ten of the men convicted in the criminal conspiracy case are due to be sentenced at Manchester Crown Court on 30 June 2022.

Protestors at the event in St Peter’s Square, and marching to Manchester Crown Court.

Article amended 2 July 2022: The article originally referred to the case of the ten men from Manchester as a joint enterprise case. These references have been removed as the men concerned were not tried and convicted under joint enterprise laws.