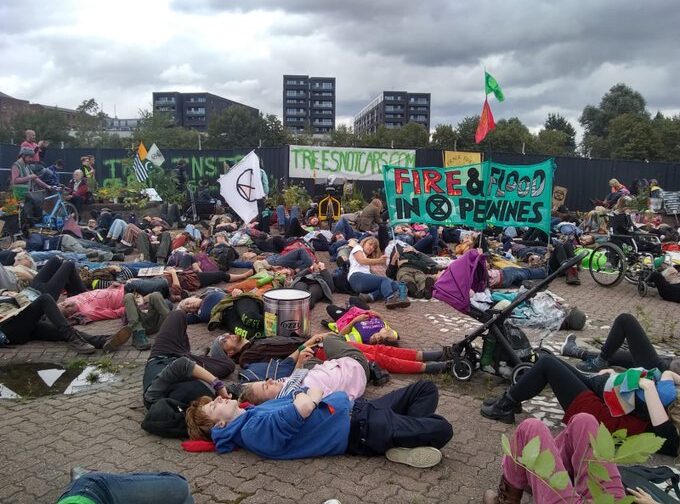 A court has found Manchester city council made the wrong decision when it approved plans to turn the former Central Retail Park in Ancoats into a temporary car park.

The council says it will appeal the decision, as Trees Not Cars campaigners call for Sir Richard Leese to ‘retire’.

Campaigners launched a legal challenge against the council’s decision to approve the 440-space car park in Ancoats back in January.

Trees Not Cars report that the court also ruled that the decision to build the temporary car park had been “unlawful”, insofar as the council had recommended planning approval based on incorrect information, an incorrect air quality assessment, and incorrect traffic analysis.

It marks a major victory for a grassroots community group that has campaigned tirelessly for over 18 months to stop the plans, which they say completely ignored the impact on air pollution, to force the plans through.

Gemma Cameron of Trees Not Cars said: “We have stopped the council from putting a car park next to a primary school. This is the first time we are aware of a community group beating the council in a legal challenge. It shows that organised community groups can take on Manchester City Council and win. It’s time for communities to fight back.”

Julia Kovaliova is a lead organiser of Trees Not Cars and a mother of three children. Two of her sons attend New Islington Free School, next to the proposed car-park site. Her eldest son, who is eleven, developed asthma five years ago.

“I am delighted by the judge’s decision and will be able to sleep easier at night knowing my son who has asthma won’t be exposed to even greater levels of air pollution. Our victory must be a wake-up call for the Council, who can’t continue to prioritise car parks and offices over clean air and green space. They must now go back to their plans for Central Retail Park and include significant green space with trees, grass, and playgrounds for families.”

Leading planning lawyers John Hunter and Piers Riley-Smith of Kings Chambers in Manchester were representing Gemma Cameron, the founder of campaign group Trees Not Cars, on a “no win no fee” basis.

Manchester city council was represented by a team of lawyers led by Christopher Katkowski QC, a London-based barrister, said to be one of the leading planning specialists in the country. ​

Katkowski is an advisor to Boris Johnson’s Government and architect behind the Government’s proposed controversial new planning laws that would see sweeping changes to the planning system. The proposed planning changes have been sharply criticised by Manchester councillors, researchers, and campaigners. Gemma Cameron said:

“Manchester’s Labour council instructed probably the most expensive planning Barristers in England in an attempt to crush a community group fighting for clean air for children.

“It’s time that Sir Richard Leese retire. After a quarter of a century, we need a fresh, new council leader in touch with the people of Manchester. Someone who fosters a new culture in Town Hall where residents are considered allies not enemies. Someone to fight our climate emergency and solve our housing crisis, making Manchester an affordable green city for all.”

Under the council’s current development framework, the former retail park will eventually be turned into a zero-carbon office district. However, a public consultation carried out in October 2020 by campaigners found that 90% of locals responding to the poll wanted public spaces on the 10.5 acre site in Ancoats rather than luxury offices.

A Manchester city council spokesperson said: “We are disappointed at this judgement and have sought leave to appeal.”

“The reason we have contested this judicial review was not about its implications for the former Central Retail Park site but the precedent it would set and the potential impact of this decision on future applications if insufficient weight was given to the previous use of sites – in this case as the car park for a retail park.

“We remain focused on bringing forward the development of this key site as soon as possible. The creation of a net zero carbon business district, with public space at its heart and as little car use as possible, will support thousands of vital new jobs for Manchester people and play a powerful part in the city’s recovery from the economic impacts of the pandemic. It is a more appropriate use for this site, right next to the inner relief road, than a park.

“We do however recognise calls for more green space and the site will integrate with an improved Cotton Field Park, to the immediate north of the site. Work is also well underway to create Mayfield Park, a major new city centre park.”

The campaign is now calling for the council to reopen its development framework for the 10-acre site to genuine community input. Trees Not Cars, following their legal victory, have reiterated their call that the Council “must now include significant green space and affordable housing on the site.”