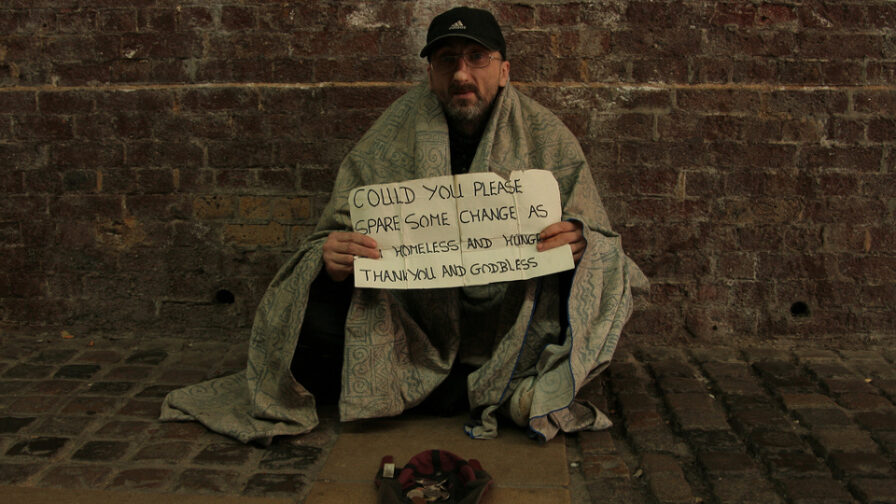 Rochdale Council are proposing sweeping new laws that will force homeless people to pay fines for begging and also restrict freedom of expression by fining the distribution of unauthorised printed materials and leaflets. The proposals, which are still open to limited public consultation, have been condemned by human rights charity Liberty as a “staggering misuse of power”.

The councils proposal to introduce a Public Space Protection Order (PSPO) covering Rochdale Town Centre was presented to Rochdale Council cabinet on the 6 March. The aim of the draft PSPO, according to the council document is to, “provide an appropriate and robust response to anti- social behavior issues”. But groups targeted by the PSPO may consider it antisocial towards them, and it has been accused of infringing the right to freedom of expression for all of Rochdale’s citizens, by Liberty.

With rough sleeping figures rising across GM, numbers have quadrupled since 2010 and there has been a 41 % increase over the last year, this legislation could be used to criminalise an increasing number of vulnerable people.

The proposed PSPO, which comes under the Antisocial Behaviour – Crime and Policing Act 2014, covers ten offences:

Under the PSPO, a person committing one of these offences can receive an ‘on the spot fine’ of £100, and if unable to pay that, potentially a court fine of up to £1000.

Some of the proposed offences are already punishable by existing law. Begging is already covered by an existing piece of legislation, the 1824 Vagrancy Act. Under the Vagrancy Act, which is rarely used these days, imprisonment is the penalty rather than a fine for PSPOs. Foul and abusive language can also be prosecuted under existing legislation, the Public Order Act 1986, with fines ranging from £1000 to £5000 or up to six months imprisonment.

Laura ten Caten, legal officer for the civil rights organisation Liberty, worried about the proposal’s effects on vulnerable groups such as the homeless said:

In her letter to Rochdale Council, Caten goes on to say:

“PSPOs are extremely blunt instruments incapable of addressing complex social problems or sensitively dealing with targeted groups. PSPO s can only lead to fines, and are therefore likely to draw vulnerable people into both the criminal justice system and a cycle of debt”.

The leader of Rochdale Council, Richard Farnell, in a letter published in Rochdale Online said in response to Liberty’s criticisms:

“The policy has been criticised nationally by a few wishy washy liberals and muddled thinkers. The huge response I have received from local residents is that 99% back the clampdown. And that’s all that matters”

Where Farnell has pulled this figure of 99% from is uncertain as there have been no polls to prove local opinion on the proposal. The consultation being carried out by the council on the draft PSPO is also restricted to considering replies from certain civic institutions, businesses in the town centre and individuals previously identified as being involved in anti-social behaviour. There is no requirement to consult the wider citizenship of Rochdale, even though the PSPO has the potential to affect them all.

It isn’t difficult to see the potential negative impact on the right to free expression and assembly by having to seek authorisation from the council to campaign and distribute leaflets and printed materials. Although the proposals are careful to quote Articles 10 and 11 of the European Human Rights Act, which cover freedom of expression and assembly respectively, there is still the question of being obliged to seek council authorisation. How would the council decide what was acceptable and what wasn’t, and how long would that decision take, days, weeks?

Caten is in no doubt that the Rochdale citizens would have their human rights inhibited by the PSPO, saying in The Guardian:

“A ban on the unauthorised distribution of leaflets would constitute an unjustified interference with the right to freedom of expression, which includes the right to impart and receive information. Such a ban would curtail the rights of citizens to campaign on political or social issues, and could also harm local businesses which rely on leaflets for promotional purposes.”

The proposed introduction of this PSPO in the town centre appears to be influenced by the commercial interests involved in the building of a new shopping centre, Section 3 of the proposal states:

“The council and its partners are investing significant resources in the Borough and more specifically into Rochdale Town Centre. The Town has seen major physical regeneration with the development of a new transport interchange, metrolink, No 1 Riverside, plus many other public realm improvements.”

This commitment to the needs of business interests above the duty of care for its most vulnerable citizens is demonstrated in Section 4.3:

“Town centre businesses have requested the Council consider a PSPO in order to proactively deal with a range of anti-social behaviour issues, which they consider are negatively affecting trade.”

The council document also states that the “negative media coverage” of increasing street begging in Rochdale Town Centre has led to a detrimental “impact on the Boroughs reputation”.

Is there a need for this PSPO?

“These proposals are a staggering misuse of power. The council is seeking to limit the rights and freedoms of Rochdale residents without providing any evidence of a need to do so- or even bothering to consult them in the first place.

“This PSPO would make criminals of the homeless and vulnerable, the young, the politically engaged, and businessmen and women alike. Criminalising those most in need is no answer to rising homelessness.”

The proposal could also see young people under 18 punished by breaking the 11 pm to 6 am curfew, or by using skateboards, bicycles and scooters. As if they didn’t have enough to worry about with the recent cuts to housing benefits once they turn 18, which could well see them homeless and then charged for begging under the same PSPO.

Steadily chipping away at civil liberties

There are strong similarities here to how the law has previously been used by Manchester City Council to potentially criminalise the homeless and restrict freedom of expression. After a string of high profile homeless protest camps in city centre squares, MCC obtained an injunction , in 2015, against people setting up camps in the city centre for the purpose of protesting against MCCs homelessness policies.

Other authorities in Greater Manchester have also introduced PSPOs. This year Stockport Council introduced a PSPO allowing them to fine anyone taking part in car cruises, which can involve around 200 vehicles congregating on car parks. In 2016 Salford Council put in place a PSPO prohibiting swearing around Salford Quays. This constant chipping away at civil liberties across Greater Manchester should be concerning us as we move into the brave new Mayor Burnham era.

It is clear that the care and support of its most vulnerable citizens, and the right to freedom of expression came a poor second to commercial interests for the leadership of Rochdale Council. If they are successful in introducing this order here in Rochdale, there is the possibility it could be rolled out across Greater Manchester.

There is a consultation period where the public can have their say on the matter until 19 May. Email address:  consultation@rochdale.gov.uk