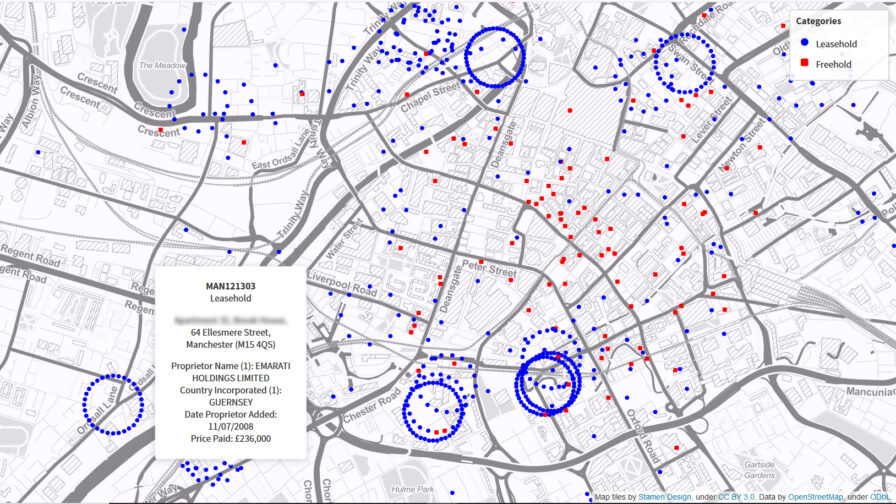 Offshore company ownership of property is on the increase across Greater Manchester. Now you can see who these overseas companies are and where the properties they own are located using an online interactive map created by The Meteor using the latest information from the Land Registry database.

The map reveals overseas companies that bought property in the ten boroughs of Greater Manchester (GM), and still own it in October 2018. Most of these companies are registered in countries commonly regarded as tax havens, which enable the avoidance of tax payments by the ultimate owner of the company. These havens are also referred to as secrecy jurisdictions, due to the difficulties in accessing any financial or ownership information about the companies incorporated there, enabling the proceeds of crime and corruption to be laundered through them.

The growing overseas financial investment into our housing market exists alongside a worsening housing crisis for many. Social housing is in decline with a longstanding failure to replace any that is lost, and property developers repeatedly wriggle out of obligations to build affordable housing – which cuts into their profits and is unlikely to be bought by overseas investors. On the 8 October, we reported at least 449 people had died while homeless in the UK over the last twelve months, nine of those deaths were in Manchester. Since then, as winter draws in, four more people have died on our city’s cold and unforgiving streets.

The interactive zoomable map shows property registered in Greater Manchester, that has a postcode attached to it, and was still on the Land Registry Overseas Company Ownership Dataset in October 2018. Property titles without a postcode were not included due to the code being needed to generate the latitude and longitude for the map. Of the 4,855 Land Registry titles registered in GM in October 2018, there were 3,204 with a postcode attached. Most of the titles without a postcode related to plots of land or parking spaces.

The icons on the map represent the approximate locations of leasehold and freehold tenured property titles. Hovering a cursor over the icon will reveal a pop up with the property title in bold at the top followed by a full address, the name of the primary company owning the property (properties can have more than one owner listed), the country where the company is incorporated, the date the proprietor was added and the price paid – if known.

Due to there being blocks of flats with many properties sharing the same postcode the icons representing these properties are offset around the location of that postcode, leading to the formation of circles of icons seen on the map. Zooming in fully to the area of the map you are interested in helps to separate these circles and give the best approximation of where these properties lie on the map. The Land Registry dataset for overseas ownership is updated every month, and The Meteor will update this map every six months, on a separate dedicated page, so residents of GM can see any changes occurring in their area.

Growth of overseas ownership in Manchester

The video below illustrates the rapid growth of overseas ownership of property in Manchester over the last twenty years. Starting from virtually nothing in 1998 the skyscraper-like columns begin to build rapidly in the city centre over the last ten years. The five countries that occur most often as the country of incorporation for companies owning property in Manchester are represented by the colour coded columns for the British Virgin Islands(BVI), Jersey, Guernsey, Isle of Man and Hong Kong.

Video above illustrates the growth of overseas ownership from January 1998 to June 2018. Land Registry data from July 2018 on overseas ownership of property in Manchester was used and only land registry titles with a postcode (1180 of 1736) were used to make the video.

Selling Manchester by the offshore pound

This online map is the latest article in The Meteor’s investigative series ‘Selling Manchester by the offshore pound’. The first story in this series identified an 8.6% rise in overseas company ownership of property across Manchester in just eight months, and that Manchester came seventh in districts across England and Wales for having the most overseas owned properties. That initial story also showed this type of ownership was increasing at a greater rate, over that same period, across Greater Manchester (1.2%) than it was across Greater London (0.2%).

A report  called ‘Faulty Towers’ by Transparency International UK investigated the London housing market, presenting evidence that international investment (often from dubious sources) in the housing market was driving up prices in wealthy London districts, which then had a ripple effect causing housing price and rent increases in surrounding areas.

Although Manchester has some way to go to reach the scale of the problem seen in London, there have been huge increases of average rental prices across Greater Manchester, with a study in 2015 showing there had been a 22% rise in just twelve months. A report released this year predicts Manchester will see the largest residential price growth of northern cities in 2018, with property prices set to rise by 6.5% and rents to increase by 3.5%. Duncan Hames, Director of Transparency International UK, said:

“London is treated as a safe haven for corrupt money from overseas. We now need to prevent laundered money and crisis capital from distorting London’s property market… property should be used as homes for those that need them and not left underused simply as a safe way to store wealth. We can only solve this problem if we root out the illicit wealth here and tackle corruption abroad.”

The Meteor previously reported that the top five overseas companies in Manchester owned 337 properties worth an estimated £69 million. And the company owning the most, Wisdom Max Group Ltd registered in BVI, owned 133 properties worth worth an estimated £27 million. Owners of tax haven companies often remain unidentified but The Meteor discovered Wisdom Max was connected to Frank Lueng, a 42 year old Canadian national living in Hong Kong, by a shared common address between Wisdom Max and two other companies in the UK where he was registered as a director, one being Ricah Investment Ltd. Leung applied to have Ricah Investments struck off the company register on the 23 October, whether this was due to The Meteor’s story joining the dots is unknown.

Emarati Holdings Ltd, another of the top five companies which owns property in Manchester was identified as being owned by a Kuwaiti Investment firm called AREF Investment Group. AREF had  undermined sanctions against Sudan during the genocide in Darfur. Kuwait Investment House, the parent company of AREF, had numerous allegations against it of allowing money to be transferred to Islamic extremist terrorist groups such as Islamic State and the al Nusra Front.

The map contains properties owned by any overseas companies, sometimes for legitimate reasons, not just those that are located in countries commonly described as tax havens or secrecy jurisdictions. It is the secrecy that is the major problem here. Our investigation and many others have shown that when occasionally a chink of light penetrates the shrouds of secrecy enabled by the commonly multiple layers of offshore ownership – something rotten is often revealed. Until offshore companies are held up to scrutiny, both nationally and internationally, it remains wise to be wary of them.

It was Private Eye’s ground-breaking investigation into offshore company ownership of property called ‘Selling England (and Wales) by the Offshore Pound’, which used Freedom of Information requests to gather the data, that eventually led to the Land Registry publicly publishing its Overseas Corporate Ownership Database.

It should be noted that The Meteor has no information to indicate that any of the companies  owning property in Manchester mentioned in this article, or any person associated with them, are evading their tax responsibilities or breaking the law in any way.