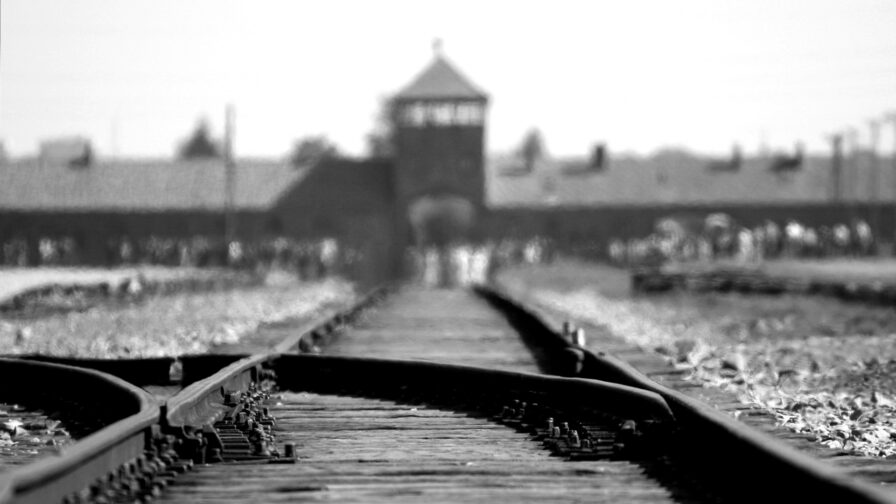 Sara survived the Holocaust thanks to the kindness of a stranger in the Netherlands. Others from her family and wider community were not so lucky and were murdered in concentration camps such as Auschwitz. Nazi Germany and its collaborators killed six million Jews during the Holocaust. Joseph Draper traveled to Manchester, as an ambassador of the Holocaust Educational Trust, to hear Sara’s story.

As drops of rain gathered in oily puddles at our feet in the car park, we were greeted by a man who drove us to his home in Manchester where we met his wife Sara, a Jewish woman who survived the Holocaust in Nazi occupied Holland during World War II.

Our arrival marked the culmination of a deeply personal journey for my colleague, Jack Nicholls. In May, 1940, as German forces invaded the Netherlands Jack’s grandfather, a member of the Jewish community in Haarlem, a city twelve miles West of Amsterdam, fled the country and the approaching horror with his family on a boat to England.

Around half of Haarlem’s Jews were not so lucky; 1,000 people were deported from the city to death camps in Eastern Europe and over 700 of these did not survive the war.

For the last three years, Jack has sought to discover the fates of those who were left behind. As his research around what happened to the Jewish people of Haarlem unfurled, one story led him to the quaint suburban house in which we now stood.

Sara is one of the few remaining survivors of Haarlem’s Jewish community. For Jack, she offered an opportunity to establish a connection with the world his grandfather was forced to flee in 1940.

Born in January 1943, Sara was saved from deportation to the death camps by a Catholic priest. He took her and her sister to a church at Waterlooplein, a market square in Amsterdam, where she lived in secret with a Christian family until the end of the war.

For a long time after the war, Sara’s family suppressed their Jewish faith, fearing further acts of persecution. Now, she is more open about her Jewish identity. Inside her home, the Jewish religion is observed with respect for the rituals of tradition. Hebraic literature fills the shelves and baroque religious ornaments line the mantlepiece. Rabbinical scholars gaze at visitors from photographs on the wall with looks of pious serenity and religious ornaments cover the mantlepiece.

“I made myself into an insomniac”

The conversation was pleasant and ordinary as we settled down to a tray of homemade pastries with our hosts. Sara then began to describe the fragmented details of a childhood marred by trauma. These stories, told to Sara by those who were old enough to understand the atrocities which were committed, reside as vivid sensual impressions for Sara.

“They used to have public executions on Waterlooplein,” she told us. “They would hang people from the lampposts. I didn’t understand what was going on.

Sara’s husband, a warm and restrained man, lowered his eyes to the crimson carpet as his wife continued to describe the acts of barbarity inflicted by the Dutch-Nazi authorities.

“There was this one girl, Rosia was her name. Every time I heard that name after the war it made me cry and I didn’t know why. Later, I asked my sister and she told me Rosia was one of those children who was thrown out of the window.

“And there is a dreadful story about the people who were hiding across the square. They were just thrown off the roof. It was so high. Four stories.

“That is probably the most vivid story that I remember. I always had that memory. I had nightmares about that memory. When I eventually went home, I never used to sleep at night. I would close my eyes and see these terrible things. So, I made myself into an insomniac.”

“In this life, you’ve got to make your own happiness”

Sara and her husband generously allowed us to stay overnight in their home. We awoke on Friday to the gentle hum of a household scrupulously preparing for the approaching Sabbath. The smell of cooking drifted up from the kitchen as visitors from the Jewish community came and went.

Sara works as a massage and beauty therapist and spent the morning with her clients. She is also an artist and on the kitchen table, recently finished, stood one of her paintings – a lighthouse whose lamp gazed out onto a violent sea of ochre and bruised purple.

“I surround myself with beauty,” she said when joining us in the kitchen. “It doesn’t have to cost the world. I can offer that. I’ll go into the garden and pick things. There’s always something to pick, even if it’s pretty leaves. Not expensive. Pretty cutlery, pretty crockery, pretty colours. I don’t wear black. You have to do these things yourself. In this world, you’ve got to make your own happiness.”

After lunch, Sara told us the rest of her story. Her father joined the Dutch Resistance in the early days of the occupation. Meanwhile, he arranged for his wife and two daughters to go into hiding in Amsterdam. After their hiding place in Waterloopein was raided by the Germans, they were rounded up by Nazi soldiers and forced to stand in the square, awaiting deportation to a transit camp from where they would be sent to a death camp.

It was here, in 1943, where the lives of Sara and her sister were saved by a compassionate priest who was horrified at the actions of the Nazis. “My mother was standing in the square with a lot of Jewish people, with me and my sister on her arm. One of the priests from the Moses and Aran Church said to my mother ‘give me those babies and I will save them for you.’ So, they took me to the church and the first thing they did was baptise us.”

After agreeing to let her daughters go, Sara’s mother went alone to Westerbork, a transit camp in Eastern Holland from where she later escaped. Sara stayed with her carers, a Dutch couple who lived in the church grounds, until the end of the war.

In 1945, Sara was reunited with her parents in Haarlem. Post-war life for Sara and her family continued to be marred by the atrocities carried out during the Holocaust. Her mother, who’s own family perished in the gas chambers in Auschwitz and Sobibor, became alienated from her Jewish identity by the years of trauma and persecution. The Jewish religion was forbidden in Sara’s home and she received a strictly Catholic education at school.

“My mother used to say, ‘we’re the only ones left’. We had no family. No grandparents. Nothing,” Sara said. “Children in school had Christmas presents but we never did. Everyone was dead. And I really thought that there were no Jews left in the whole world.”

Sara was 16 when she rediscovered the Jewish faith. She recounted the moment when she entered the Sephardic synagogue in Amsterdam for the first time:

“I opened the door. There was only candlelight and all the prayers were being chanted. And it just absolutely engulfed me – the spiritualism, the holiness of the prayer. I couldn’t move. I was awestruck. I couldn’t read a word of Hebrew and I just stood there listening. I made up my mind that next year I would speak Hebrew.

“My mother was not very happy with me. ‘You’re going to get yourself killed!’ she would shout. I think she was absolutely terrified. We used to get the Holocaust for breakfast, lunch and supper.

“She would sit in the chair and look at a little box of blush which used to be her sister’s. And she would cry. Or she would hold the card her mother had thrown out of the train when she was taken to Auschwitz.

“My grandmother had written on the card: ‘I don’t know where we’re going. We’re going East. But don’t worry about us. It’s not so bad. With God’s help we will return to you in good health’. My mother could not cope with that. Until her last days she was very angry with the almighty.”

“Though I walk in the valley overshadowed by death, I will fear no evil”

In 1943, Sara’s grandmother left with her youngest children to follow her husband who had been taken to Auschwitz. “My father actually begged,” Sara said, “he begged his in-law, my grandmother, not to go. But she went. And that was one of the things he did talk about, that he could not stop her going.”

Later, Sara read aloud the biblical passage, Psalms 23: 1-6, which had been written on the card her grandmother threw from the train:

“Hashem is my shepherd, I shall not lack. Though I walk in the valley overshadowed by death, I will fear no evil, for You are with me. Your rod and Your staff, they comfort me. You prepare a table before me in view of my tormentors. You anointed my head with oil, my cup overflows. May only goodness and kindness pursue me all the days of my life, and I shall dwell in the House of Hashem.”

On our final evening in Manchester, I was struck by the same resilience of faith which accompanied Sara’s grandmother to her death. At the candlelit table, I listened to the hum of Hebrew prayer as Sara and her husband  blessed the Sabbath feast. What had once been a reminder of past destruction for her mother was now restored as an act of pride and a source of healing in Sara’s life:

Fore more information on the Holocaust check out the, Holocaust Educational Trust and the Yad Vashem websites