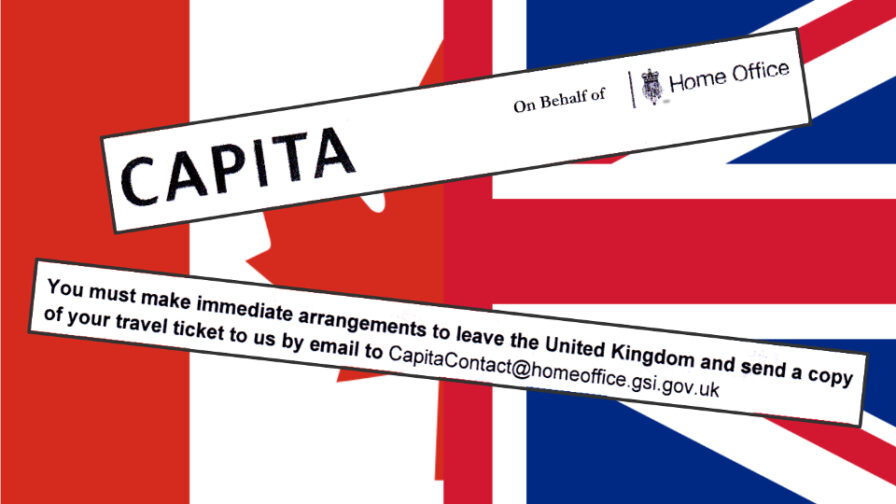 I was born in Newfoundland, Canada in 1961. My mum was English, a nurse, who went to work in Newfoundland in 1954. It was there she met Dad, who is Canadian. They married in 1960, I was born the following year. In 1963, we came back to the UK, and settled down in Middleton, where Mum came from. I’ve lived here in the UK ever since, and it’s home.

Fast forward a few decades to 2015. I had been unable to work due to illness, but because of an improvement in health I started to look for work, and after a time managed to get a job. Or so I thought.

Because I wasn’t born in the U.K, I needed to produce a number of documents, some of which I didn’t have. To cut a long story short, I ended up being sent a letter (see below) from Capita, the controversy ridden outsourcing giant awarded the Home Office Contract to implement the hostile environment in 2012. Along side the letter I also received a text whilst waiting for a bus, and an email, all essentially telling me to f**k off, from the place I’d lived since 1963.

Oh yeah, and that also meant that I then had the job offer withdrawn. A job I wanted and needed, in the care sector looking after adults with learning disabilities. Cheers for that, Home Office.

I then entered a bureaucratic struggle that lasted for over a year, that finally ended last year with me establishing that I had the right to remain.

So when we began getting all the stories about people being wrongly threatened with deportation, I wasn’t shocked or surprised. But I have got a significant advantage, because I’m white. So when the outrageous and disgusting Windrush generation scandal blew up, again it didn’t surprise me.

I’ve seen enough official racism in my time to know that is the default attitude towards migrants of a different colour. Old Empire habits die hard.

Essentially, I’m still here because I’m white. Racism is deep in the Tory DNA. That doesn’t apply to every individual Tory, but then they aren’t the ones in charge. This bunch of incompetent chancers are.