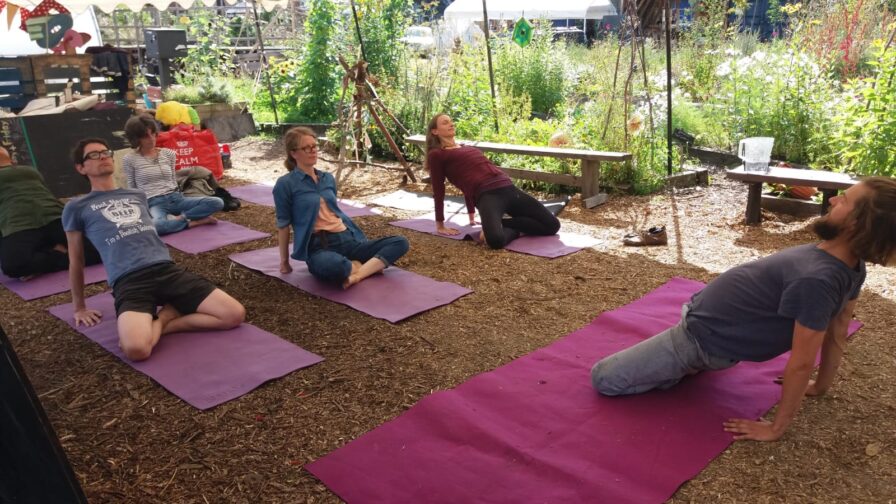 Autumn is for harvesting, and there’s a bountiful crop of events on offer this month for Hulme Community Garden Centre’s Super September – a programme of wellbeing and nature connection events. So far there’s been Radical Herbalism, a day of “digging deep into our elders’ wisdom, interactive sessions exploring spiritual biology and talks exploring mental health and environmental justice.”

Last weekend saw the Introduction to Beekeeping course, a poignant necessity in a city so enamoured with bees as to make statues in their honour, yet so clumsy as to provide very little habitat for the living creatures themselves. This is a charge which cannot be levelled at Hulme Community Garden Centre(HCGC), where the bees are well catered for with plenty of flowers and hives. “We’re trying to get the message out about the importance of bees,” says the manager of HCGC, Rachel Summerscales, “to tell people how vital they are ecologically, so people aren’t so frightened of them, or of wasps.”

“The bee trail was really popular. Every time I was out in Manchester I saw families [on the trail]. It would be really great if families were interested in seeing how many different pollinators they could spot around the city – call it the pollinator pathway.”

But awareness-raising alone is not enough. Practical action needs to be taken to ensure a functioning ecosystem. “Habitat creation would be good, wouldn’t it? Manchester’s not a very green city compared to other cities,” says Rachel. HCGC is an inner-city haven for biodiversity, and like a plant sending nutrients to its kin along the tendrils of fungi embedded in the soil, it supports similar projects around town. Rachel explains:
“The new Mayfield Park [is] a six-acre green space that will be amazing, but I think there’s a lot of work to do to join up those spaces and the spaces we have got like Alan Turing garden and those – they’re lacking in biodiversity and not very bee-friendly. There are quite a few beehives in the city on roofs and things. I think if we could keep pushing that agenda of promoting greenery in a small space, like the fire escape garden that we’ve worked on which is near Canal Street. That’s an old Victorian fire escape and it’s got massive amounts of biodiversity just in pots. It doesn’t have to be a wildflower meadow. Just a bit of plant life – for the bees and for general well-being in the city.”
Urban green space is not only important for wildlife, but also human happiness. Turkey recently saw riots triggered by a protest over a lack of parks in Istanbul, showing a deeper unease about a lack of democracy in the country. “Trees are a sign of a civilised society,” said one resident of Sheffield, which has been up in arms for the past year about its trees being felled because the private company hired to manage its streets finds it cheaper to manage young saplings than the mature trees which provide beauty, habitat and clean air. In modern Britain, private profit is too often prioritised above the public good.

“How much does a smile cost?” asks Mark Frith, the business manager for Hulme Community Garden Centre. “it’s not the kind of thing you can write a report about or show stats on. It’s gonna be different to each person.” There have been books written about how holistic therapies, a connection to the body, the natural world and human community, hold the key to health and wellbeing. Some of these books detail the difficulties of introducing these truths to an often hard-headed and avaricious medical establishment.

“It’s very difficult to change systems. It’s very difficult to tell an academic or a trained professional that what they’ve learned in their years of academia could be wrong.” Many of the holistic and community-based models of health and wellbeing described by Mark will be familiar to anyone who has experimented with different methods of wholesome living, but the readiness with which some of them, such as yoga, mindfulness, and sound therapy, are beginning to be embraced by the medical establishment is perhaps more surprising.

The idea for a holistic health and wellbeing event at HCGC sprang from a meeting between Mark and a local GP at an NHS gathering. “Dr. Honeyman from Manchester medical practice came to volunteer with us after a conversation we had at the local CCG (Clinical Commissioning Group) meeting. He came for a day’s volunteering and he enjoyed it so much he invited some of his other colleagues and he started to refer patients to us.” For good reason. During his time at the garden centre, Mark has witnessed many local people take significant steps towards health and happiness.
“Frank* is a regular volunteer who comes in three times a week and sweeps the floors. It looks immaculate when he’s finished. Dave* comes in at the end of the day and washes the dishes for us. We’ve not asked these people to come in. They do it because they feel that sense of ownership, they do it off their own backs and that, for me, is very rewarding because they seem very happy at the end of the day.
“One of our volunteers was self-harming and she had the confidence to talk to me about it and she said that’s reduced since she’s been coming here because she could express herself in different ways. Using the axes and the saws, she’s expressing herself. Whether it’s anger and frustration, she can take it out on something that’s not herself – an inanimate object like a piece of wood that eventually goes into the fire and creates fertilizers for the gardens. That expression of whatever she needs to get out is actually useful in what the gardens do, and the physical activity can encourage people to get into the stress in their bodies.”
Exercise and the right kind of manual labour have been proven to reduce alienation and stress, with one study showing that 53% of adults report feeling good about themselves after exercise. The psychological benefits of gardening are evident in the fact that gardeners tend to spend on average an hour longer per week partaking in their chosen hobby than walkers or cyclists.
“There are so many people that come to say they’ve been inspired by the garden centre… as a space, we can actively demonstrate the change in people. We have people coming in that feel really isolated and, at first, uncomfortable about being in groups. It may take a week, a month, or a year or even longer, but for them to feel comfortable enough to be part of a group have a sit-down meal, have a drink and feel needed and listened to – it is really important that we showcase that.”

With this Wednesday 19 September bringing healing activities like yoga, gong bath, mindfulness, and qigong to Hulme Community Garden Centre, there will be ample opportunity for the centre to position itself as a prominent wellbeing attraction for Manchester. There will also be an introduction to permaculture, a pay-as-you-feel meal from the Gaskell Garden Project and music from the Confucius Institute. The main draw for Mark, though, is the centre itself and the human interactions that happen around the edges of the programmed events.
“It’s quite interesting the conversations you have with total strangers in the gardens – the one thing they have in common is the need for a space to come and relax where they can talk to people feel like they’re being listened to… You see people in the street scared to talk to strangers or scared to say hello to someone they don’t know. If you smile at someone walking down the street it’s like, ‘why are they smiling at me?’, rather than ‘oh that’s a happy person.’”

An urban space where people talk freely to strangers (sober) is a precious resource indeed. One visitor described the atmosphere as ‘like Glastonbury without the music.’ HCGC is certain to send some happy people out into the streets this week. Not least because it is also hosting the National Permaculture Convergence from Thursday 20 to Saturday 22 September.

“It’s the first time the convergence has been held in an urban setting, so that’s quite exciting,” says Rachel Summerscales. “It’ll be interesting to see how permaculture works in smaller places.”

The convergence will attract scientists, eco-activists and off-grid homesteaders from around the country for a weekend of discussions on topics as varied as education, the cooperative economy, urban farming, Emergent Dynamic Governance Ecosystems (!) and, from HCGC’s own Rachel, “the ups, downs and in-betweens of running a community organisation.” 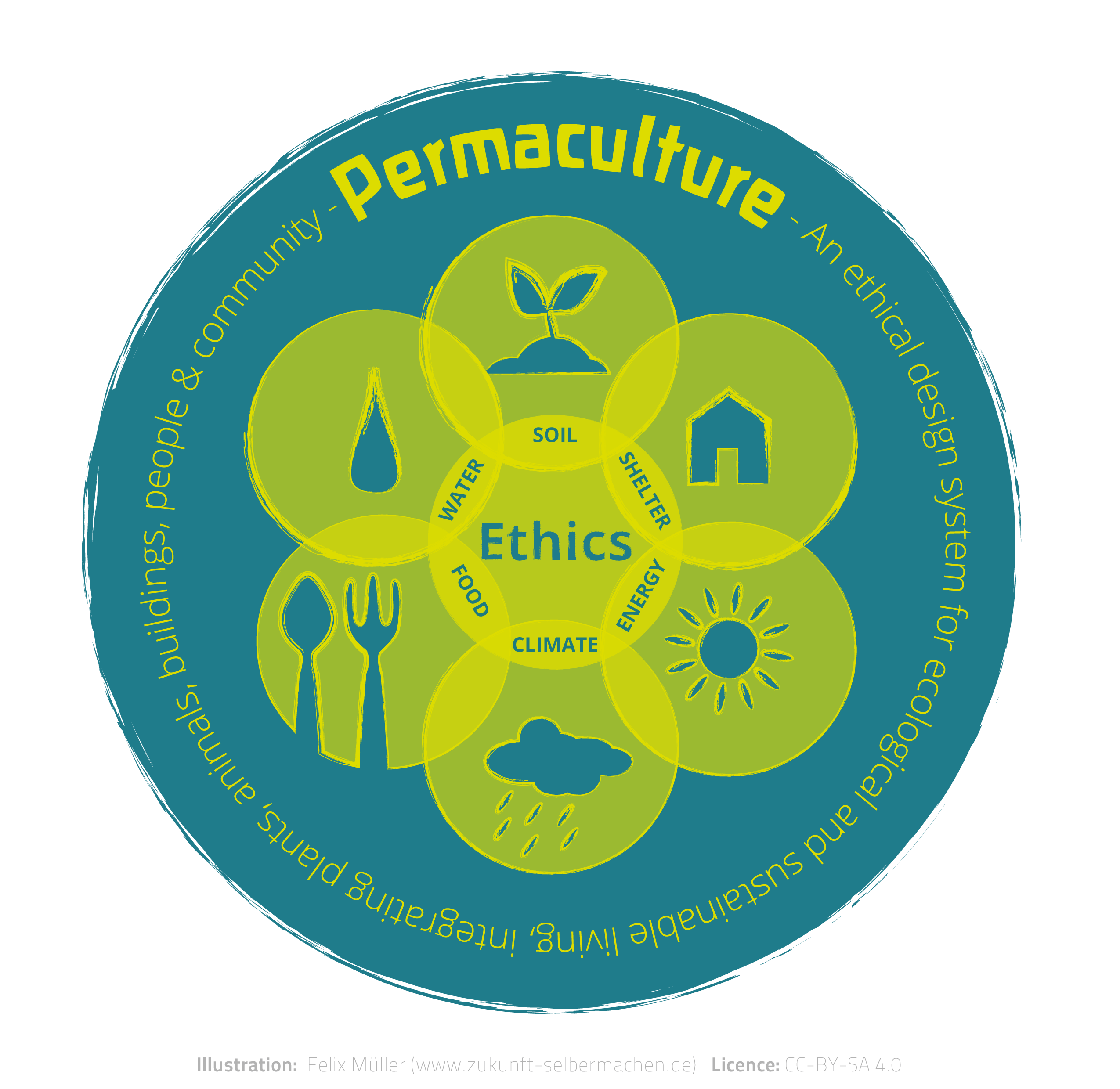 Permaculture, a hybrid of organic agriculture and ecological design philosophy, has tended to be popular in rural areas where arable land is more readily available. The word permaculture is a portmanteau of ‘permanent’ and either ‘agriculture’, or ‘culture’ (depending on who you ask). It resists easy classification, positioning itself as a ‘revolution disguised as gardening’, although many of its followers find its trinity of priorities (Earth-care, People-care, Fair-share) and its lessons in systems-based logic to be surprisingly helpful in very different walks of life, such as software design and urban development.

“Having a city convergence provides the opportunity to understand how permaculture principles can be applied to an urban situation,” says Kath Gavin, the Sustainability Co-ordinator at HCGC, who will be offering a workshop on forest gardening in the centre’s own forest garden. “There’ll be a multitude of practical solutions to empower us to make a positive difference in our own lives, communities and local environment, making new connections and strengthening existing ones, and having some fun along the way.”

Radically restructuring one’s worldview, and honestly grappling with the crises of modernity are activities made much more palatable in an environment that prioritises well-being and natural beauty. This weekend promises to combine old wisdom and innovative solutions to create a brighter future and preserve what might be lost.
In much the same vein, the last weekend of September brings to HCGC an interactive storytelling experience which reminds us of the natural poetry which is being drained from our language. The Lost Words is an illustrated book by Robert McFarlane which brings to life us the woodland words which once illuminated the parlance of every child – sycamore, heron, dandelion – and are now so seldom used in our tech-oriented culture that they have ceased to be included in children’s dictionaries. ‘The Lost Words: Seek Find Speak’ is a theatre piece based on the book and has been lighting up the summer festival circuit with “spells wrapped in gold lettering around trees, animals to be discovered in the woodland, and lines of spells perched on branches like starlings.” Now it comes to Hulme, to inspire this wild city’s young creatures with the words and ways of times gone by.
From herbal knowledge, to knowing the value of true community, working with your hands, understanding how natural processes can improve our urban systems and food supply, and preserving the living language which inspires us to feel compassion for our world – Hulme Community Garden Centre’s September offerings invite us to look backwards in time to help preserve good things for future generations. Human well-being is inextricably connected to non-human nature. Finding points of true connection can be challenging in our highly mechanised world. Finding hope is hard. Thank goodness there’s a place that makes it easy.

*Volunteer names have been changed