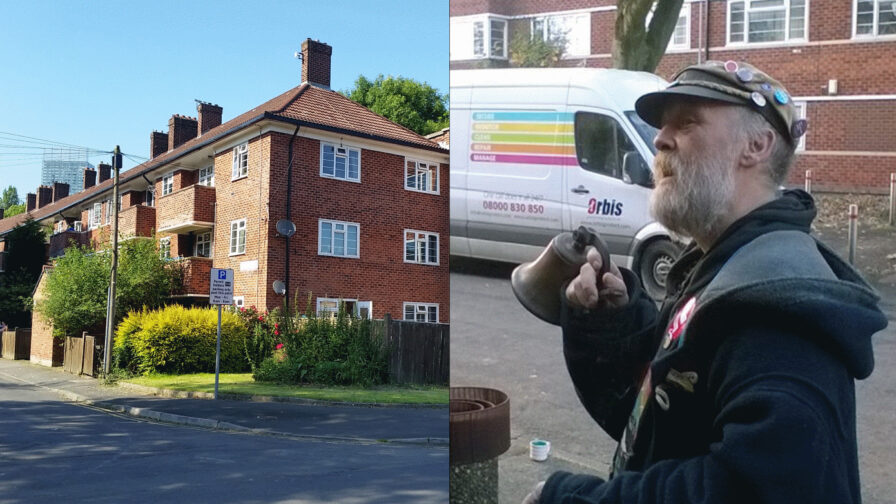 Ringing last orders, on the bell acquired from the now closed Grants Arms pub in Hulme, Captain Cae 0s was evicted from the flat he called home in the Bentley House estate in Hulme (AKA The Redbricks). This was the culmination of an epic struggle with his social landlord, dating back to early 2015, when the results of a disputed survey of his property resulted in Cae being formally summoned to a housing tribunal.

One Manchester, the housing association which owns the freehold to the estate buildings (Cae was formerly the leaseholder of his flat) informed him that the eviction would take place at 1pm. But it seems they were taking no chances with this long-time community activist and vocal critic of both themselves and their social housing predecessor City South Manchester Housing Trust, AKA City South. The bailiffs and their police bodyguard arrived at 11 o’clock, on the 1 December, and informed Cae he had 10 minutes to vacate the property and take whatever he needed.

Catching Cae off guard left him to a week of homelessness and bureaucratic wrangling. The paperwork needed to access the new flat, offered him by One Manchester, was boarded up in his hastily vacated former home.

As previously reported in the Meteor, Cae has been involved in an ongoing legal dispute with One Manchester over alterations to his flat, made without written permission from the estate’s Registered Social Landlord at that time, City South. Cae’s flat was purchased from Manchester City Council under the Right to Buy scheme in 2006, before the estate was passed to City South, who merged with Eastlands Homes in April 2015 to become Housing Association One Manchester, the current owners of the estate.

At the housing tribunal hearing in May 2015 City South produced a dilapidation list, based on their surveyor’s report, containing alleged changes to the property which Cae was expected to rectify at a cost of £60,000. Cae challenged the numerous inaccuracies in the survey and dilapidation list by commissioning his own surveyor’s report. But attempts to appeal the tribunal and eviction decisions were rejected in the civil court.

According to Lucy Williams, of the Bentley House Tenants and Residents Association, Cae’s eviction had been resorted to without any attempt at mediation or exploring other options for Cae to bring the property up to scratch and still remain living there. Williams claims attempts by the Residents Association to intercede on Cae’s behalf were ignored by One Manchester, and went on to say:

Williams described a perceived pattern of eviction by housing management to create and maintain a particular demographic profile on the estate, and thought tenants judged to be of a higher social class were being treated more leniently in comparable cases.

Another Bentley House resident, River Axe-the-Tax (who changed his name by deed poll during the campaign against the bedroom tax), accused the housing association of fraudulent tactics and claimed the DIY alterations to the flat were:

“A useful excuse to get rid of him [Cae] because he was a boat-rocker.”

Axe-the-Tax added that the origin of the legal grounds of City South action against Cae was that, “he made alterations without getting written permission in advance” and that in fact “retrospective permission is possible”.

Meanwhile Williams has quit her involvement with the Bentley House Tenants and Residents Panel. In part, she says, due to One Manchester’s treatment of Cae, but also over its lack of engagement with tenants and their representatives in general. In her opinion One Manchester’s priorities are land and property values, and she says the costs of pursuing, evicting and rehousing Cae should be more than recouped by taking possession of his property.

Captain Cae Os, the self-styled “urban social anthropologist”, will now be bringing his brand of community activism to new surroundings in the St. George’s area of Hulme, and furthermore as a tenant of One Manchester, who offered him a new flat as the last alternative available. However, Cae is adamant that the fight for his former property will continue.

One Manchester were contacted for comment but had not responded at time of writing.