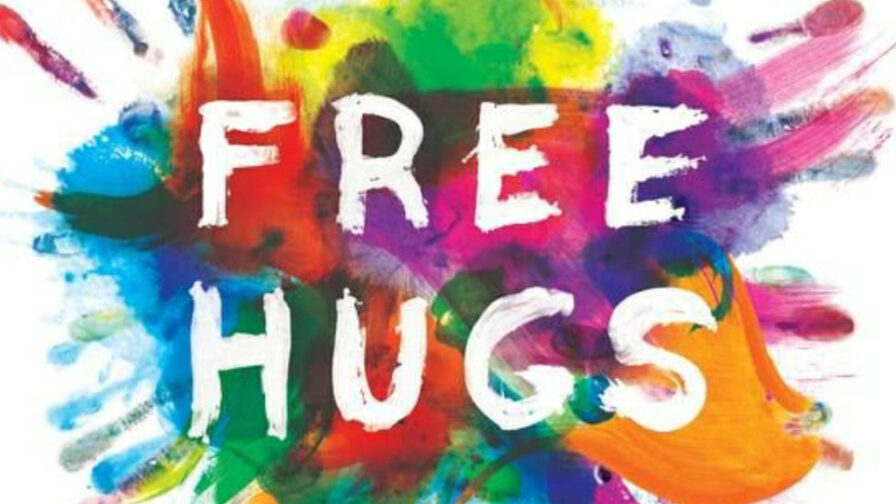 Sitting and watching Sarah Whitehead and her team of volunteers giving out free hugs, it became clear to me that the spirit of this city will not be broken. Mancunians were visibly embracing the advice of poet Tony Walsh when he said “Choose love Manchester” at a vigil to those killed and injured in the terrorist attack.

The horror and shock of the appalling events at the MEN Arena, on the 22 May, have done little to divide the city. Instead Manchester has pulled together, with many examples of solidarity and support, for those directly affected by the suicide bombing and the wider community.

The ‘Manchester Needs Your Love’ event, arranged by Sarah is a great example of this. Her team of around twenty volunteers started off in Piccadilly Gardens, on the 27 May, where the atmosphere and mood was one of relaxed, but aware, contemplation. People are clearly appalled by the abhorrent event but are determined to carry on as normal, where possible. Sunny Piccadilly Gardens was as busy as any other Saturday I’ve seen.

Standing close to the tram stop entrance of Piccadilly Gardens, every passer-by was offered a free hug. I witnessed many a person stopped in their tracks, reluctant at first, but then give in to the beaming smiles, and share some simple human contact.

People of all ages, cultures, and genders were included. I witnessed disabled people in wheelchairs get hugs; children encouraged by their parents joined in; armed police officers were hugged; solo travellers marching by listening to music were cuddled; every type of person you could imagine were approached and included.

Even people who declined went away with at least a smile on their face, testament to the effectiveness of such a simple idea. Asking Sarah how she had come up with the idea, she responded that she’d asked herself:

A community activist who has spoken at many Universities, and community events, Sarah said that in this kind of a situation, human compassion is needed most. She felt that she should do something to help spread the love, saying:

“Many people have reacted with a hate fuelled response. If everyone takes an eye for an eye, then the whole world will end up blind”

After coming up with the idea, Sarah posted her plans on Facebook, where they soon attracted like-minded people. Of the volunteers participating, she only knew around seven or eight of them. Many were just people who wanted to help, and feel like they were contributing to the community. Sarah was overwhelmed by the interest on Facebook, and again on the day. Many people come up and buy the ‘Free Hugs’ t-shirts she has produced especially for this event, clearly some of them making the trip for that purpose alone. All proceeds from the t-shirts will go to the campaign supporting the victims, helping them on their long road to recovery.

After speaking to Sarah, it became clear that I had also been recruited. After donning a t-shirt myself, we set off from Piccadilly Gardens to St Ann’s Square, spreading more love on the way, and ultimately to pay our respects and light some tea lights, at a public memorial to the twenty-two lives lost.

On the way there, we hugged many people of many cultures. Residents of the city were hugged as warmly as visitors to Manchester. Sarah described how so many people had responded positively to being hugged, and quite a few had said that it was the first time in years that they’d had a hug. Again, this proved how powerful an idea this is; we live in a world that is seemingly so sexualised, but also one in which basic human contact and touch is something we’re afraid of, or have limited access to:

“Free hugs, everyone needs a hug in Manchester.”

Proclaimed Saffy, one of the volunteers, as we were overtaken by a group of Football fans singing football chants while letting off smoke grenades. The whole group was co-opted into hugging, with Sarah professing:

“Free hugs, spread the love, not the hate.”

Arriving at St Ann’s Square it was impossible not to be moved by the change in atmosphere. The sombre mood affected everyone. The tributes of flowers, toys and chalk writings on the floor bringing home exactly what has occurred and also how much people care.

Hundreds of people were in the square, with a long orderly queue waiting patiently in turn to lay their flowers, deposit their toys, and pay their respects. People had obviously travelled from far afield to come today. A group of bikers with “Midlands Riders” emblazoned on their leather jackets, joined the queue, bunches of flowers in their hands.

We lit our tea lights, leaving them on one of the statue bases. I like to think that we did some good and spread some love, where it was needed.

There are many other opportunities to get involved and help. I saw people queuing around the block in Chorlton for bee tattoos; and there are plenty of appeals for support where you can get involved and donate. Currently, the Manchester Evening News Just Giving crowd funder to support the families of those killed and injured has topped £1.8 million. While an appeal to pay for drinks for the NHS staff, treating the injured, has raised over £13 thousand.

It’s not all good news. Reported hate crimes in Greater Manchester doubled in the days after the attack; and I’ve seen a number of hate fueled posts on my social media feeds. This demonstrates how important events such as Sarah’s are in terms of combating hate crime, by overpowering it with expressions of love.

To me it seems that a terrorist attack that was meant to divide us has instead been met with an outpouring of love and support for everyone affected, creating stronger bonds between people and communities. As it states in many shopfronts and windows in Manchester city centre: “The City of Manchester Stands United.”