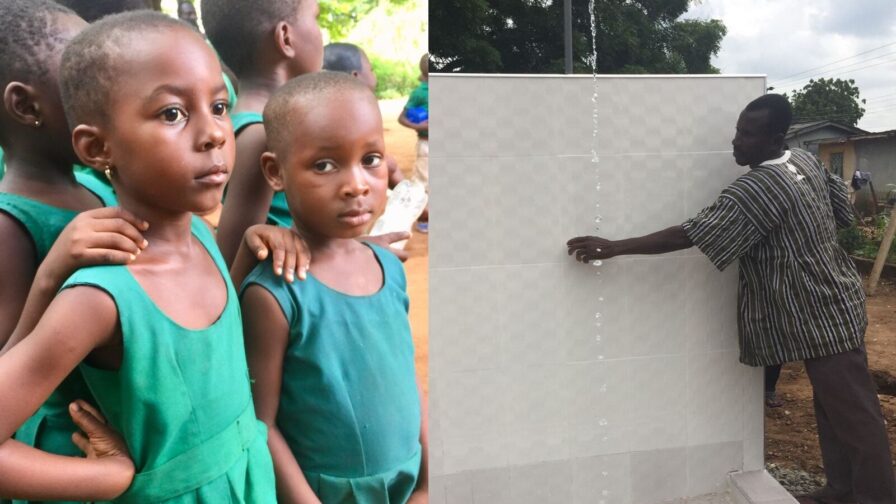 On a ferry boat on the Volta River, while travelling around Ghana in 2003, Manchester-based laughter consultant Robin Graham was offered food and accommodation by the boat pilot, Kove-Yaw. A friendship was started by this kind offer. Kove-Yaw was the founder of an NGO named Kids Foundation Inc, set up to empower women and children, and he made Robin aware of a drinking water problem in the village of Fievie Dugame.

The village, with about 600 houses and a population of approximately 1500-2000 people, had no drinking water, and people were forced to walk half a mile to a dirty pond filled with cow faeces. Not only was drinking the water making them ill, but just going into the water gave them illnesses such as Guinea-Worm Disease.

At home in Manchester, Robin is a member of the Rotary Club, one of the world’s largest and most successful global humanitarian service organisations, with 1.2 million members in over 200 countries. Guided by the Rotary Maxim of “Service Above Self”, the Rotary Club of Manchester, which was established in 1911, actively supports worthy causes locally and internationally. A chance meeting of Robin and another member of the Rotary Club, A’dell Harper, at a dinner in 2011, led to the start of the Wonders of Water (WOW) Project, which finally reached its target of safe drinking water for Fievie Dugame in June 2019.

Along with Robin, A’Dell and Rotary Scholar Aileen Schissler, I recently spent two weeks in Ghana finalizing the water project, participating in the opening ceremony and working with schools and community leaders. Being a member of the Rotary Club of Manchester for only one year, I felt privileged to be able to participate in this project. In the past, when living in Hong Kong, with projects that I had been involved with in South East Asia, I had been fortunate to see the impact small things can have on a community, so I was excited about being involved in this project in Ghana.

The experience of actually meeting the villagers and seeing the excitement and impact on them when the first tap was turned on is something that is difficult to explain. Mama Ku-Agbi (female leader of Fievie) said, “ We love you, just as you have loved us. If it was not for you, we would still be drinking water with faeces, drinking water with animals.” The impact on myself was also vast as I experienced village life – the sights, the food, living without internet, the lack of toilets, the excitement of the children, tribal meetings under a mango tree, learning how to be patient with long meetings that required a very ritualistic process and in-depth discussions, and the final installation of clean drinking water.

The journey to this point has been a long one, since Robin and Kove-Yaw’s friendship began 16 years ago, and began to gather momentum after Robin met A’dell in Manchester five years ago. Upon hearing about the absence of clean water in Fievie Dugame, A’dell’s response was, “children in the UK have to have access to fresh clean water by law, but how could they value it if it was always there?”

A’dell, Educationalist and Managing Director of the Rompa Nursery School, Wilmslow, implemented a method of collecting funds for the project while highlighting the importance of water, by having her students donate a penny every time they took a drink of water. Up until this point, Robin had been building a relationship with the community of Fievie in Ghana and talking about their need for water to others, and the penny collection was the idea that kickstarted the WOW project.

He gave talks in schools, companies, and community organisations to collect money, persisting to make the project happen. Along with the penny collection, funding was then obtained from The Rotary Club of Manchester and a Global Grant from Rotary Foundation as well as some private donations.

In 2013, the project went into full initiation. Robin and A’Dell made visits to the village to help implement the project, supervision and support was provided locally by the Rotary Club of Ho in Ghana and a Ghanaian contractor was hired to carry out the work. It was always the goal to work with the community towards what they wanted, and they had decided that drinking water from the water main from the closest town, Sogakope, was what they required, as other ways of obtaining water had been found to be inconsistent or impossible.

During the extension of the water main from Sogakope, difficulties with pipe sizes and electricity outages created an inconsistent water flow. This problem was solved by installing four polytanks of 10000L in different locations in the village, ensuring that water is still available, even when there are power outages.

Robin, A’dell, Aileen and I all attended the opening ceremony on June 25th 2019, witnessing the blessing by the tribal priest and the drinking of water by the chief of Fievie, Togbe Awaga IV. Robin says that this day was his favourite memory of the trip, in particular, “seeing the face of the chief, after all these years of friendship and talking about the water finally flowing.”

All four of us agree that our favourite memory of the trip was seeing the polytank installations and witnessing clean drinking water flowing from the taps, for the whole community of Fievie Dugame, but there is more to this project than putting in pipes. It also requires paying for the water used, maintaining the installation, and implementing sanitary conditions. The Rotary Club of Ho (Ghana) and Kids Foundation are training the community to set up a Water and Sanitation (WATSAN) committee to keep it all working effectively.

Beyond our key aim of completing the water project, our group also carried out a number of other activities. We attended three community meetings including the Sogakope Chief Executive and Water Commission, as well as the Amnesty International Club of Ghana Annual General Assembly.

Robin gave a presentation on laughter and stress management to 80 nurses, doctors and other staff at Sogakope District Hospital. Aileen, a Rotary Scholar, collected information about health and women’s issues and I recorded the trip through notes, photos, and video.

We also donated a full set of Encyclopaedia Britannica to the Senior High School in Sogakope and attended and spoke with pupils and staff in five schools and one nursery, donating books and other educational items to three of these. The headteacher in one school where we donated books in 2018 told Robin that “the books are being used, and some pupils have started reading”. This is very significant to us because it shows how small things can make a big difference and having a positive impact for the young people.

Our group of four have decided that we want to see how we can help the community to raise money themselves for community improvements through seed funding. We want to run a pilot project in microfinance for one woman as a rice farmer and to establish a small community-owned farm where all profits go to community projects. The ultimate goal is for the community to be self-sustaining, but in the meantime, the village needs help in setting this in motion.

This was a life-changing experience. To see the daily struggles that a community has to go through, doing things that we take for granted, and then watching how just one thing, like providing clean drinking water, impacts the community, brought me to the understanding that we all want the same things for our families and children and made me see the importance of taking a global view. We have so much more in common than we appreciate and coming to that realization has changed how I view the world.

Find out more about the Wonders of Water project here

Find out more about the Rotary Club of Manchester here