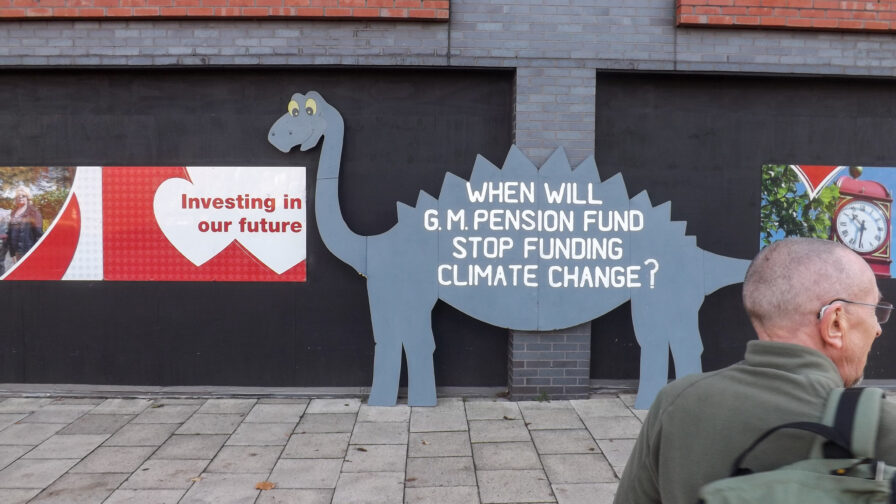 Organised by Fossil Free Greater Manchester, a coalition of organisations and individuals, the protesters presented remnants from the recent moorland fires on Saddleworth Moor and Winter Hill to delegates and present a three-step plan to clean up the ‘dirtiest Local Authority Fund in the UK’:

The Fund’s AGM takes place as the UN’s Intergovernmental Panel on Climate Change (IPCC) released a report warning ‘there is only a dozen years’ for global warming to be kept to a maximum of 1.5C, considered to be the best chance of avoiding catastrophic environmental breakdown.

The report, published earlier this month, states that global emissions of carbon dioxide need to fall by 45% by 2030 or we risk catastrophic change. It has been estimated that over 80% of fossil fuels must be kept in the ground to limit global warming. 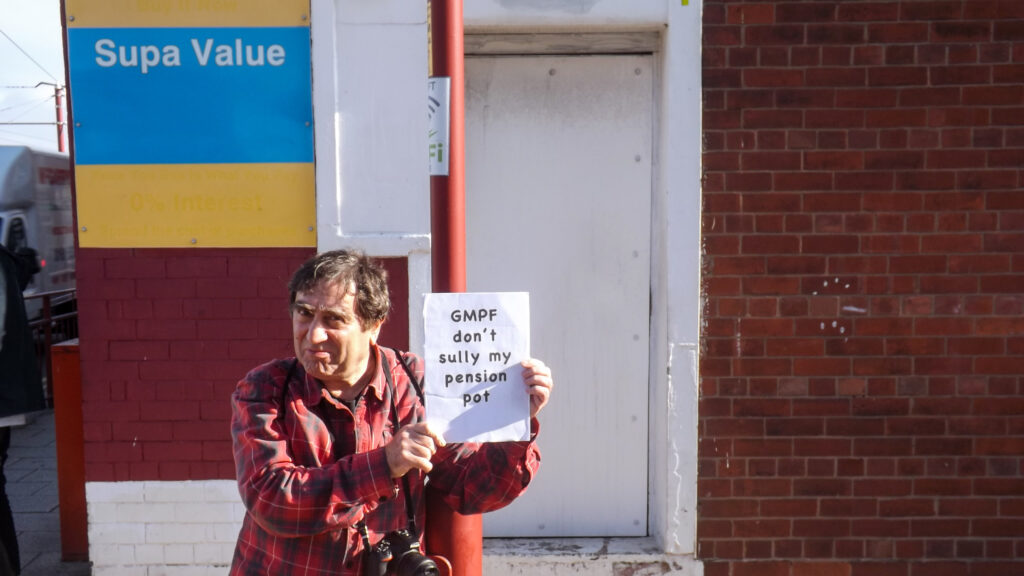 This year’s prolonged and intense summer weather is thought to have contributed to the intensity and scale of two moorland fires – one on Saddleworth Moor near Tameside, and another on Winter Hill near Bolton. Aided by an almost record-breaking run of hot weather and minimal rainfall, beginning on the evening of June 24th a fire burned on Saddleworth for almost a month. While the disruption to locals and the city due to increased air pollution was significant, the impact on the environment was more severe.

Almost 6,000 acres of unique moorland was damaged, and while grass soon started to sprout, heather which had previously covered the land could take years to grow back. The fire had a devastating impact on the wildlife. Birds such as curlews and short-eared owls had their nests and habitats destroyed, while reptiles such as frogs and lizards and small mammals such as hares and foxes have perished. Some of the bigger animals including deer and sheep were rescued from the fires but it is impossible to say how many smaller animals died.

“They don’t appear to see the connection … the money is being invested in companies that are driving this damage,” says one council employee. “I don’t want my pension funding fires or floods in Manchester, a pension is for the future and companies like Shell and BP are actively destroying it.” On Friday he was holding a bright banner outside the GMPF meeting, asking passing cars to ‘Honk if you hate moor fires’, getting a loud measure in response.

Last year the GM Pension Fund AGM was invite only, this year there were no invites at all – the AGM was reserved just for employers. Protesters with pensions in GMPF were initially denied entry but eventually two members were allowed in, but were not permitted to put questions to the board about the issues.

It remains to be seen if GMPF can be swayed to change its policy, but the situation is serious and the course of action is clear to Alan, another protester: “We have 12 years to save the climate, it’s not an option anymore to just have an opinion. It’s time to get out here and do something because, without pressure, nobody in power will.”