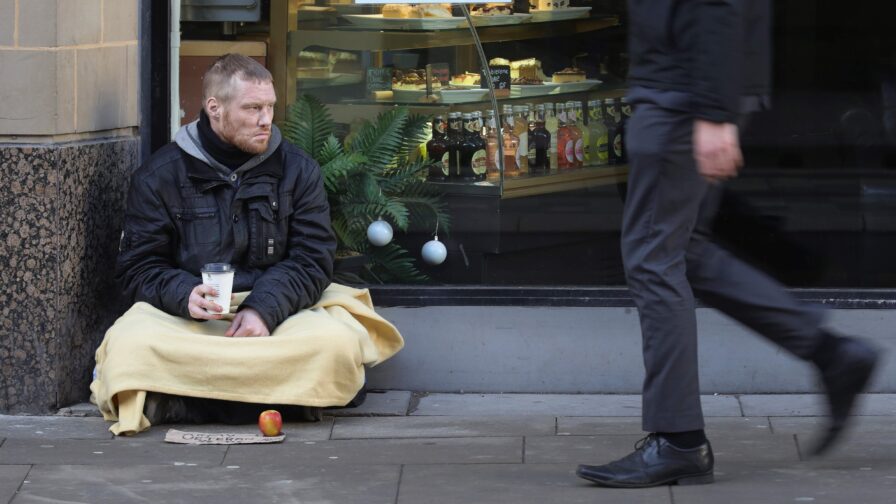 Manchester homelessness groups join over 60 others across the country to call for additional funds for local authorities to permanently eradicate homelessness, as Manchester City Council tells The Meteor it needs ‘greater financial support’ from the government to keep people off the streets.

Five frontline homelessness groups and charities operating in Manchester have joined more than 60 others across England to sign a damning open letter to the government outlining their concerns with its plans to end the ‘Everyone In’ policy and highlighting weaknesses in the current strategy to end homelessness. The signatories warn of a “humanitarian disaster” this winter if enough cash for safely distanced shelters is not provided.

In a statement issued on Sunday 24 May, the Minister for Housing, Communities and Local Government Robert Jenrick vowed to make 3,300 homes available within 12 months to prevent rough sleepers housed in emergency pandemic accommodation in England returning to the streets. Jenrick said they would bring forward £160m of its £381m, four-year rough sleeping services budget to be spent this year.

But the open letter from homelessness organisations says “much of [Mr Jenrick’s] statement recycles previously announced pre-Covid-19 lockdown pledges”. The signatories urge central government to extend the ‘Everyone In’ policy after lockdown to prevent a return to the levels of homelessness seen before the pandemic, “so that all people experiencing homelessness are able to access safe and secure accommodation for the entirety of the Covid-19 pandemic and beyond.”

The argument made in the letter states extending the policy would particularly help people with No Recourse to Public Funds due to being subject to immigration control. This group makes up a large proportion of the rough sleeping population in Manchester but they are currently not set to be provided for under the current plans. The letter asks for NRPF rules to be urgently lifted so that anyone can access housing support, regardless of immigration status.

So far Greater Manchester authorities have provided 1,600 homeless people who had nowhere to self-isolate with emergency accommodation under the ‘Everyone In’ policy.

But charities have expressed fears about the prospect of a surge in street homelessness, after a report to the Greater Manchester Combined Authority was leaked to the Manchester Evening News earlier this month, revealing that the Ministry for Housing, Communities and Local Government had “drawn a line” under its programme and had allegedly told councils it would no longer be funded.

While acknowledging the government’s achievement of accommodating thousands of people, the signatories outline particularly grave concerns regarding winter provision, which is set to be vastly reduced due to public health requirements this year, stating: “We are now facing the risk of a humanitarian disaster as the shared winter shelter spaces commonly used will not meet public health requirements.”

The open letter signatories based in Manchester are:

The Myriad Foundation, who help support Manchester’s rough sleepers and signed the letter, said: “The principle of ‘Everyone In’ was, and remains, the same. It is the principle of a fair society. This policy needs to be extended so that all people experiencing homelessness are able to access safe and secure accommodation for the entirety of COVID-19 pandemic and beyond.

“Local authorities also need legal authorisation and government guidance to allow them to fulfill the ‘in-for good’ principle: that once service users initially engage with homelessness services, they will be guaranteed the long term housing support needed to avoid returning to the streets.”

The letter comes as Metro Mayor, Andy Burnham, told council bosses at a GMCA meeting on Friday that they were facing a “dire” financial outlook due to Covid-19. According to an update to leaders at the meeting, the Covid crisis is set to cost Greater Manchester’s councils £574m by the end of July, of which only £168m has been compensated by central government, leaving a £406m shortfall.

All 10 council leaders have agreed to lobby the government for more funding and to hold an emergency meeting on the issue on 24 June.

Even before Covid-19, according to figures from the National Audit Office, the amount of central government funding to local authorities had fallen by half in real terms between 2010 and 2018, which amounted to a 28.6% real-terms reduction in spending power.

Councillor Luthfur Rahman, Lead Member for Homelessness for Manchester City Council, agreed with the argument in the letter, telling The Meteor:

“We have seen the benefit that bringing people sleeping rough indoors has had in the short time that the Everyone In policy has been running. We don’t want to lose the gains made by in effect having the financial rug pulled from under us. The government has made funds available to authorities like Manchester City Council and we are grateful for that, but if it is serious about ending homelessness that must be backed up with greater financial support.“

Working past lockdown as a Council we are committed to supporting all of the people we have supported and will continue to work with our partners in the Manchester Homelessness Partnership and the public to stop anyone falling back into a life on the streets.”

The full text of the open letter can be found here