Happy Days Review: What’s it all mean? What’s it meant to mean? 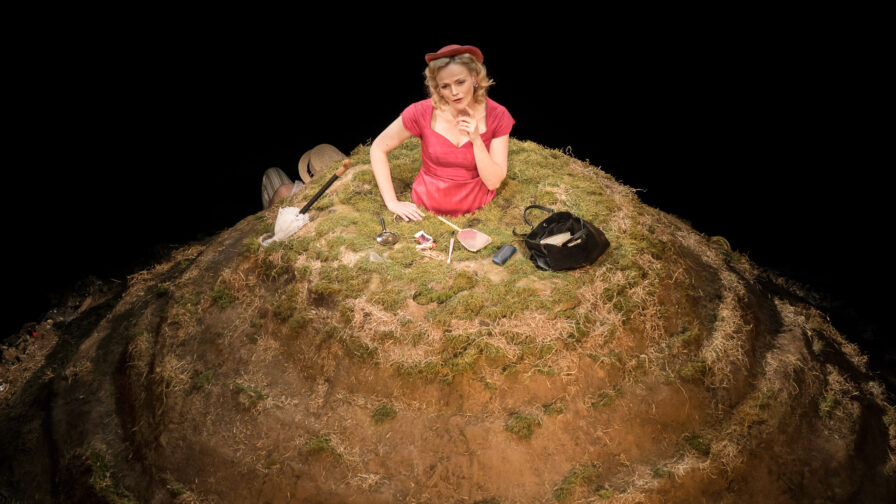 Maxine Peake plays Winnie, a woman in something of a predicament, but determined not to let it get her down. Winnie is buried in the ground up to her waist, yet for her this is all a perfectly normal aspect of every day. The same old earth, the same old routine, the same old bag containing the possessions she needs to perform her daily rituals. This is how things are.

The repetition in Winnie’s life gives her comfort and order, something to cling to as the earth slowly devours her. “This will be a happy day”, Winnie tells us over and over, so she “must be right, mustn’t she?” In her efforts to make the best of each day, she preens herself in front of her mirror, using each of the items in her bag, which she carefully places in front of herself.

Winnie’s routine ensues as usual, as it does every day. She takes out her items one by one, and uses them to keep herself nice, to be no better and no worse than the previous day. She performs her ritual with precision and order (so she thinks) doubting herself yet managing to reassure herself that it does not matter. 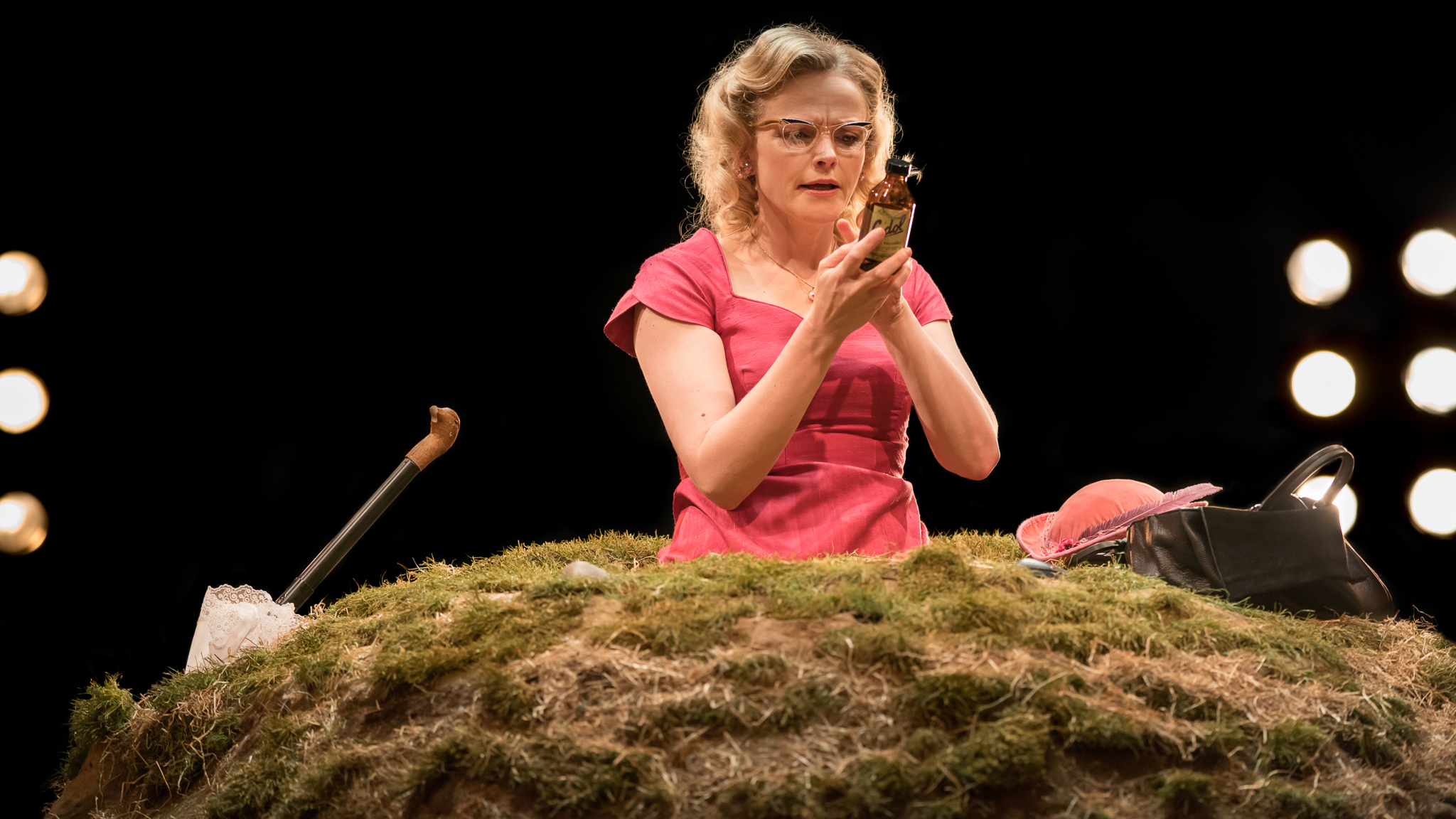 Among the lipstick, toiletries and old bottles of medication, there exists Brownie, her gun. At times Winnie is comforted by its presence, at other times she is distressed. Why might that be? It’s well known that a gun brought to the table in Act One has to be fired by the end of Act Two, yet rules are made to be broken. Or are they?

The bag, the earth, Brownie, and the bell to jolt each new day into existence is all that Winnie knows, with the exception of her terse husband Willie (David Crellin). As he resides in a cave at the base of the mound behind her, the audience can see Willie, but Winnie cannot. He makes his presence known to her with pained grunts elicited through repeated prompts from Winnie. Although he is unseen to Winnie, and less forthcoming with his words, he is an essential part of her story. 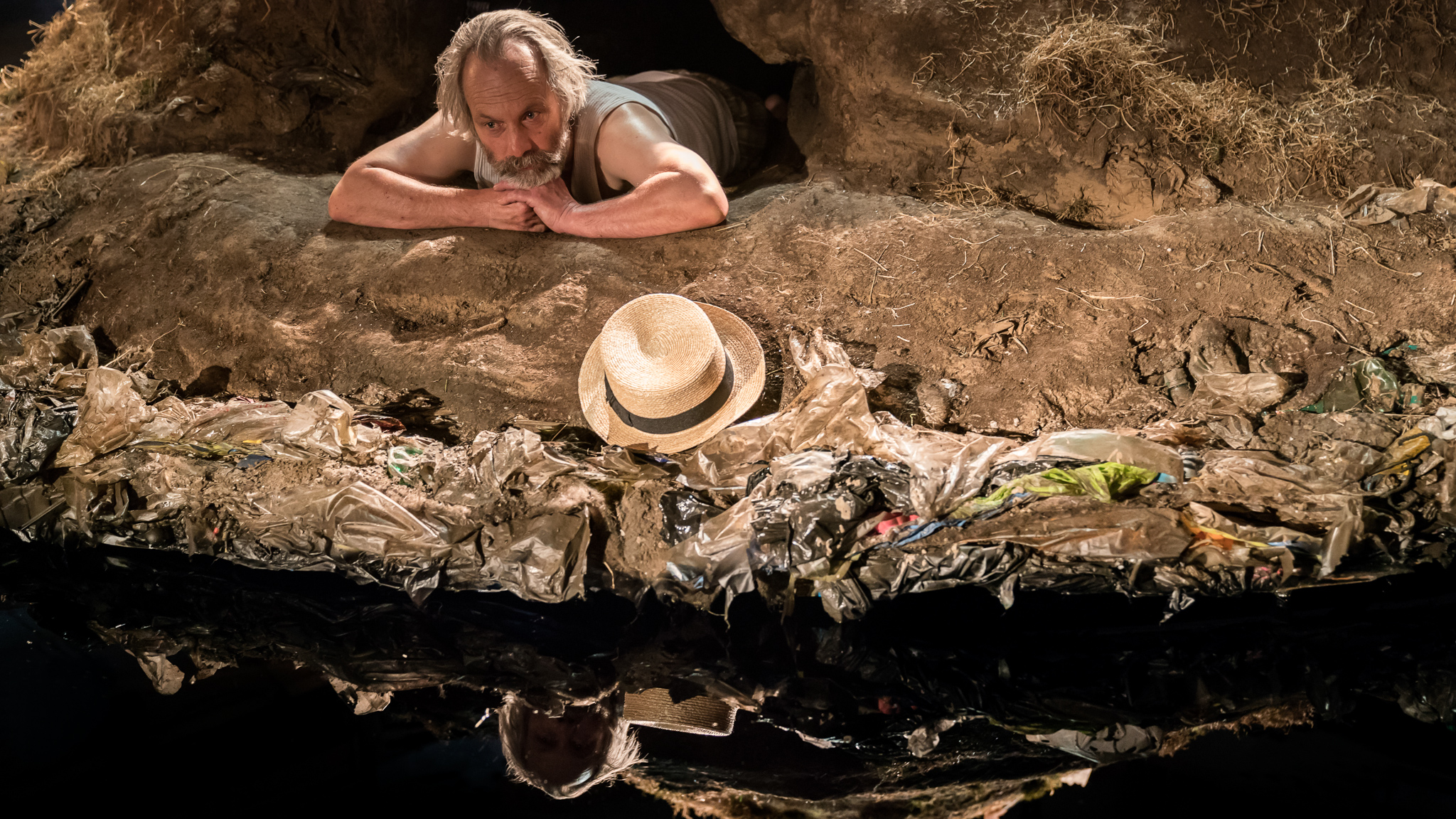 Happy Days is not an easy play to perform on a stage in the round, but the clever set design overcomes this, incorporating eerie visual effects, which signal a darker side to Winnie’s endless stream of words and eagerness to make-do. The lighting, sound and set layout create an atmosphere that tells us much more than the story alone. There is a sense of foreboding contrasted with urgency every time the bell rings for Winnie to be present, attentive.

Themes of repetition, memory and the nature of existence run through this work, instilling a deliberate sense of déjà vu in both Winnie and the audience. The articulation of these carefully picked elements of the script is done masterfully, yet some of Winnie’s innuendoes fall a little flat. It is hard to know when and whether to laugh at Winnie’s reminiscences and her tragic situation, although the portrayal of the darker side of her unusual fate is sensitive and subtle.

Maxine Peake is an interesting casting for Winnie, a role normally played by an older actor. This is compensated for though in the delivery as there is not much room for reinterpretation of the text and its arduous, exacting directions. Winnie is played as overbearing and sickeningly upbeat, magnifying the knowledge that there is a bleaker side that she is concealing from us, and from herself.

When Winnie finds herself in a place where words fail, the mind fails, she can no longer maintain her façade. She still manages to speak at great length, but she changes. The sun beats down, the bell rings the second she closes her eyes, and she cannot put on a brave face indefinitely. Winnie is confronted with her own vulnerability, played hauntingly and convincingly by Peake.

Routine and familiarity cannot always be relied on, as Winnie discovers, and probably knew anyway. With her world and her resilience crumbling, how will this new day end?