GRT History Month should reflect an honest history: a history of land struggles and state harassment 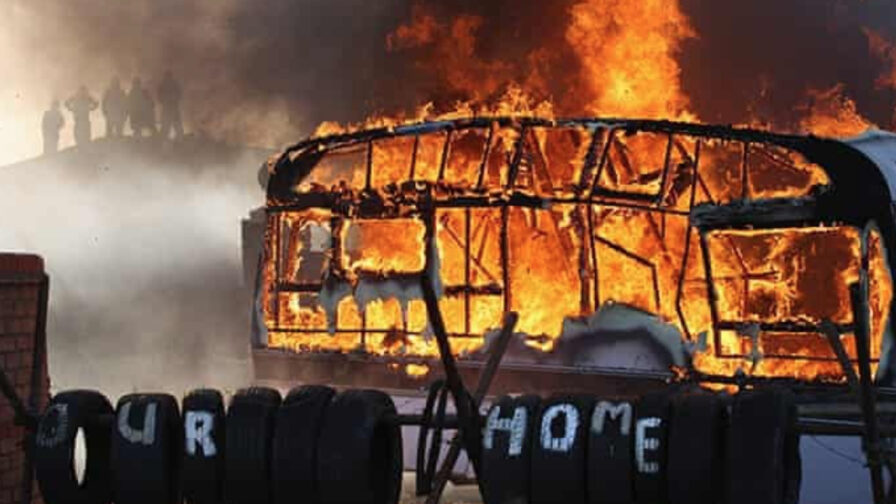 In this piece for GRT History Month, Sean Benstead ties together anti-GRT racism within the Labour party, land policy, and the government's Police, Crime, Sentencing and Courts Bill.

This month is Gypsy, Roma & Traveller (GRT) History Month. The Labour Party have celebrated through the usual lines of communication, with some well-wishing graphics posted across social media. However, on June 1st — day one of the month — Pat Karney, a member of the executive of Manchester City Council, announced on Twitter that a group of travellers had pitched up on an empty field next to an industrial estate in his ward and, he boldly announced, “[t]he authorities have been alerted”. This occurred no longer than 2 months after a front-bench Labour MP, Charlotte Nichols, campaigned to the residents of Warrington on a platform against “traveller incursions” before apologising in a tweet and withdrawing the materials. No disciplinary measures have been taken. GRT History Month, within the context of continued land access revocation and state harassment, is a celebration without liberation. We must use history as a guide to political action.

The irony of this is mostly lost on those that view history as a mere recollection of events, or a contemplative exercise in retelling more comfortable stories of cultural confluence. However, for people who witness and experience everyday injustice and wish for a radically different world, we understand history differently. History, for us, is political; it denotes a collective memory of suffering and catastrophe as a method to understand injustice in the present and to guide redemptive action for the future. It is this differing understanding that is why, for example, we did not see any commemoration within the Labour Party for Romani Resistance Day on May 16th; a day that is politically loaded as a call to redeem the losses of the past through contemporary emancipation of those who suffer injustice in the here-and-now. It is also for this reason that it is imperative that we politicise GRT History Month and seize the opportunity to demand political action in the present.

Historical persecution of our GRT communities has always been intertwined with Britain’s historical economic development. Today, many GRT people are non-travelling. However, there was a time in our national history where a larger portion of the population on this island were nomadic, travelling people. That is, until the original sin of capitalist development began to enforce a systematic enclosure and privatisation of common land in a process of accumulation by dispossession. For groups of people that held travelling as a key component of their culture this was an absolute affront which, for some, was not to be given up due to economic and everyday logistical hardship. Many of the existing travelling communities are descendants of those who refused to renounce themselves to cultural negation within the violent economic deluge of the industrial revolution.

To enforce enclosure of the commons and a universal resettlement of huge numbers of the emergent proletariat into industrialising areas, the state required a firm legal apparatus- first came the 1554 genocidal Act sentencing Gypsies to the death penalty, then came a wave of less violent laws that consolidated the definition of GRT communities as vagrants with sentences of fines and eviction. For centuries, GRT people then began to travel regimented routes with agreements from local landowners to utilise private land as stopping places, before the 1906 Middlesex County Council Bill imposed penalties on the landowners for such agreements. Since 1980 2/3rds of the remaining traditional stopping places have been sealed off before the 1994 Criminal Justice Act revoked the duty of local authorities to provide sites for GRT communities. GRT people have never had so few places to go.

Recalling this uncomfortable history gives us a general framework to understand our contemporary injustices- and we must do this because the battles of yesterday, although they were fought with different weapons and according to different rules, are the same battles fought today. And the enemy has not ceased from being the victor in these battles.

Today, we live in a political economy that has been dominated by neoliberalism as a consolidation of the role that capital has in accumulation by dispossession. It has been written extensively elsewhere that contemporary neoliberal land policy affects seemingly disparate groups within the urban population. Less explored, however, is how this logic affects GRT communities in particular.

Contemporary land policy generally follows the same historical trends of restriction and criminalisation. Whilst Manchester City Council boasts of a large traveller site on Dantzic Street in Collyhurst, this site has been deemed unfit for purpose due to environmental risks from flooding of the Irk, in desperate need of repairs and remains under threat after a targeted shotgun attack last year. Furthermore, after years of being eyed by developer hawks, the site is within the development area of the new Victoria North neighbourhoods.

Victoria North, a tactical rebranding of the unpopular ‘Victoria Gateway’, is the child of a private-public partnership between the Far East Consortium and Manchester’s local authority. The former is an international real estate company incorporated in the Cayman Islands, whilst the latter has been criticised for providing them with subsidies worth tens of millions and allowing them to roll back on sustainable and affordable housing commitments.

The traveller site on Dantzic Street lies within the forthcoming Red Bank neighbourhood, on the meander of the Irk. This particular neighbourhood will consist of “a landmark 37-storey building […] as well as two sister towers, Park View (26 storeys) and City View (18 storeys).”. Given its proximity to the Green Quarter and other luxury residences, we can expect the rent gap produced by speculative land values to be fully exploited on this patch of land. As for a new traveller site to replace the one on Dantzic Street, the future remains unclear. Having reached out to an Executive Member for Housing and Employment within MCC about ecological concerns alongside the worries concerning lack of land access to travellers, the first question was responded to with misplaced enthusiasm whilst the latter was yet to be briefed at all.

With a recent spike of unauthorised stopping and trespass in Greater Manchester as a result of government policy, we can expect that the GRT community will not renounce their right of access willingly. Nor should they. The Home Office has anticipated general resistance, through mere refusal to move-on, with components of the now-renowned Police, Crime, Sentencing and Courts Bill. The PCSC Bill, vehemently attacked by ‘Kill the Bill’ protests up and down the country, gives fascistic provisions to the police and the courts to seize the homes and property of travellers on unauthorised sites, face up to 3 months in prison and be banned from the area for up to 3 years. The Bill is not only grossly unethical in terms of disproportionality, but also deemed completely ineffective at dealing with the perceived problem by regional police forces.

As we have seen, this is not a new frenzy within an increasingly populist Conservative Party to attack the rights of the GRT community, but part of a long historical process of the state to negate the existence of travelling communities on behalf of rent-seeking capital and an intensification of accumulation by dispossession.

A democratic, participatory GM Land Commission would do well to reserve a seat at the table for representatives of the GRT community. This may serve to rebalance the scales of power between the communities and the state-capital machine, but we must also embark on a long, concerted march through the courts too. We must defeat the PCSC Bill and repeal all other existing legislation that exists for the purpose of assaulting the rights and negating the culture of travelling communities on behalf of capital. However, these objectives aren’t achievable overnight, and they require heavy boots-on-the-ground organising as well as strong legal expertise in advocacy roles.

What is more easily achievable though is the beginning of an honest and careful engagement with GRT history throughout all echelons of the Labour movement and the party. An honest engagement reveals a process that leads to the present state of affairs and presents us with a guide to political action through understanding that process, its victims, and its agents. Many of our representatives in the Labour movement and the party will be open to this. Undoubtedly, there will also be some who wish to see the complete negation of GRT ways of life in the name of fascistic understandings of national purity and/or for the greasing of the wheels of capital accumulation. We can expel this to the dustbin of history, and we must start within our own movements and our own party.

Sean Benstead is an active organiser within Labour for a Green New Deal and an associate member of the European Roma Institute for Arts and Culture (ERIAC).