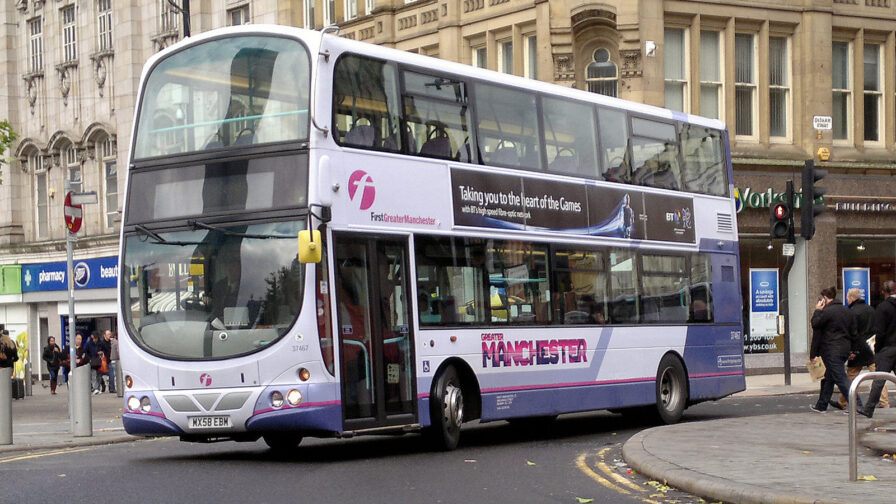 Bringing buses under public control is ‘better value for money’ for the city region in spite of ‘severe’ impact of Covid-19 on bus patronage and revenues, Greater Manchester leaders hear at a meeting this week.

The leaders of Greater Manchester’s councils this week voted to proceed with franchising the city region’s bus network despite the impact of Covid-19 on bus patronage and revenues.

In an online meeting on Friday morning the Greater Manchester Combined Authority (GMCA) considered a report by Transport for Greater Manchester (TfGM), which assessed the potential impact of Covid-19 on the bus market in the city region and the viability of proceeding with the proposed franchising scheme put forward by TfGM last year.

TfGM Chief Executive Eamonn Boylan said it had “long been the aspiration of all the districts in the combined authority to see the means brought forward to improve the consistency, the quality and the integration of our bus network”. However, there were many “uncertainties in the marketplace” resulting from the pandemic that needed to be assessed before the combined authority could make an informed decision.

In June 2019 TfGM assessed whether to bring Greater Manchester’s buses into public control under a London-style franchising system. A public consultation was held by the GMCA on the assessment until January 2020, where 83% of respondents when asked whether they supported or opposed the scheme, said they supported it. The combined authority intended, before Covid-19 hit, to make a decision on whether to proceed with the proposed bus franchising scheme in spring 2020.

The report appendix describes the impact the pandemic has had on bus patronage in Greater Manchester as “severe”, with the weekly number of bus trips dropping 90% in March 2020 compared to pre-Covid levels. Bus services are currently running at about half the capacity that they were previous to the pandemic.

“The pandemic had also shown that the bus network is vitally important for people in Greater Manchester, enabling them to access employment, education, services and wider opportunities”, the report says.

Concerns were raised that where patronage had decreased individual bus services would become less viable, meaning the bus network would reduce further. This would be made worse by “mode shift”, TfGM argues, a situation where passengers who can afford to switch to more expensive modes of transport like cars, leaving the services on which less affluent passengers rely less viable.

TfGM argues mode shift would be more likely to occur when government support for bus services reduces or stops. TfGM told The Meteor that between March and the end of September, the government had provided an extra £28.5m in emergency funding to bus operators in Greater Manchester after a drop in revenues.

“If there was greater damage to the bus market leaving people without travel options, or only more expensive travel options,” the TfGM report says, “there would be a greater imperative for GMCA to intervene to support the market and people’s ability to travel, irrespective of whether franchising has occurred.

“Such intervention would also be better value for money under the Proposed Franchising Scheme than the Do Minimum or a partnership [alternative options to franchising] because intervention would not be adapted around what is left in the commercial sector but would be done on the basis of a coherent intervention across the whole of Greater Manchester”, the report argues.

“The case for change set out in the Assessment [conducted by TfGM last year] remains and the Franchising Scheme still offers a greater chance of achieving GMCA’s objectives for the bus network than the potential partnership option.”

To proceed with the Proposed Franchising Scheme TfGM recommends the GMCA undertake a further consultation exercise to allow consultees to provide their views on the Assessment in light of the Covid-19 impact report.

Council leaders present at the GMCA meeting approved the report’s recommendations but not before some attendees expressed unease at the uncertainty caused by Covid-19. Councillor David Greenhalgh, leader of Bolton Council,told the meeting that he supported the consultation but raised “concerns” about the “financial implications” for the combined authority if sufficient government funding was not forthcoming.

Councillor Sean Fielding, leader of Oldham Council, reminded the meeting that “significant amounts of public money” already went into the bus network “in the form of subsidising routes” deemed “unviable” by the private sector.

“If patronage continues to be unpredictable, then in order to fund some of those services more public money will have to be put in in the future,” Fielding said. “Whether we do it through the regulated market which this is a consultation to move towards, or whether we continue with the existing commercial market, it is still something that costs the public purse quite a lot of money.

“The judgement for people responding to this consultation is, in return for all of that money that goes into the bus network, regardless of the system under which we operate, do we want more control or do we want to continue with a system where we have very little control?”

“Franchising buses is the only way of reforming the transport network in Manchester. We are therefore fully supportive of the GMCA proceeding with franchising. At the same time, to create an industry which workers are attracted to join we have submitted minimum standard requirements for working conditions, which Mr Burnham and TfGM have received.”

Commenting on the report, Martin Griffiths, Stagecoach Chief Executive, said the “key lesson” from the pandemic had been “the positive impact from government, local authorities and public transport operators working in partnership to deliver the vital services that customers and communities need in very challenging circumstances”.

Pascale Robinson, from Better Buses for Greater Manchester, welcomed the combined authority’s decision and reaffirmed the need for franchising the bus network. “The second report into our buses has concluded that public control is the way to go and it’s no surprise to passengers,”

“We are sick of expensive, unreliable, ever fewer buses on our streets. Bus companies have received loads of public money over the past few months and we still don’t have a guarantee that services will continue, meanwhile FirstGroup chair told investors earlier in the year that they were all on ‘the same page in the one direction of maximising shareholder value’.

“It’s time for our buses to be in public control, so we can decide routes and fares, and bus companies finally will be forced to provide services according to the needs of the community, not just profits.

“Andy Burnham needs to go ahead with this, as this is what Greater Manchester said they want overwhelmingly in the last consultation.”