By Guest Writer | 9 January 2019Friends of The Meteor 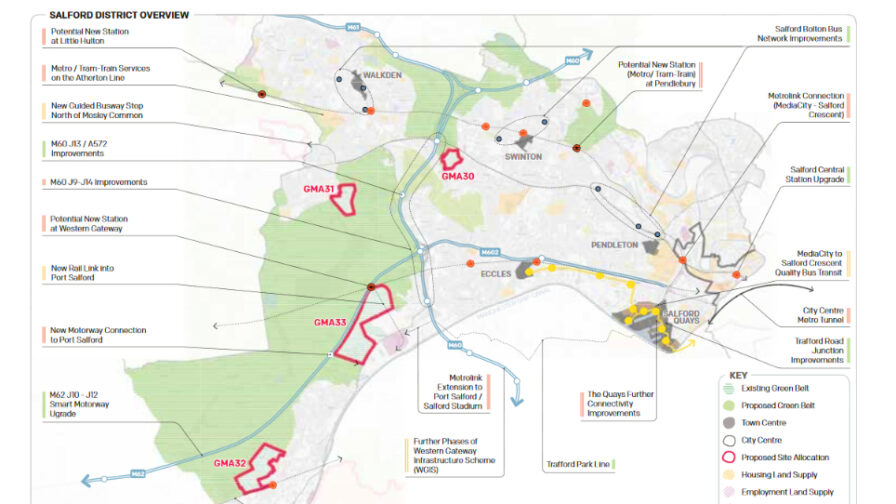 The Revised Greater Manchester Spatial Framework has been published – and is already meeting huge opposition, particularly in Irlam where 1,600 dwellings are being proposed on Green Belt land north of Irlam Station, with only around 150 designated for social rent.

“Utterly shameful…We are going to be surrounded by development – Port Salford one side, houses on the other” states the Planning For Our Future Facebook group “The fight begins!”

The Framework was re-written after huge campaigns against the last publication before Andy Burnham became Greater Manchester Mayor. However, this latest version, contained in reports over one thousand pages long, is already meeting with opposition from Salford groups, ranging from Planning For Our Future in Irlam and Cadishead, to the Salford Green Party General Election candidate, Bryan Blears, to even the Labour Party local election candidate, Lewis Nelson.

The Greater Manchester Spatial Framework (GMSF) proposes 1,600 ‘dwellings’ on Green Belt land to the north of Irlam Station. 25% will be classed as ‘affordable’, but out of those ‘affordable’ houses only 37.5%, or 150 properties, will be for social rent.

“1,600 homes in an area where no new infrastructure can be brought in” questioned the Planning For Our Future In Irlam and Cadishead Facebook group administrator “To think that you can just re-designate a little bit and the developers won’t challenge you is ludicrous. This opens the door for the whole area to to be developed!

“Why would you choose the publicly accessible Western Greenbelt over the private restricted land to the East?” they added “Utterly shameful! We are going to be surrounded by development…Port Salford one side, houses on the other. The fight begins!”

Bryan Blears, the Salford Green Party designated General Election candidate, was also scornful of the proposal…”Plans to build 1,600 homes in Irlam are unsustainable and will wreak havoc on the local community” he said “The Green Party opposes the use of Green Belt land for these housing developments which will go towards lining the pockets of private property developers, instead of creating affordable homes for Salford residents.”

And even the local election Labour Party candidate, Lewis Nelson, has come out against the plans on social media…”I do not believe plans for 1600 houses on Chat Moss between Roscoe Road and Cromwell Road are in the interest of our community” he wrote.

Meanwhile, Peel Holdings’ Port Salford will see an expansion onto the Green Belt, including part of the golf course, with 320,000square metres of ’employment floorspace’ allocated on the land. Elsewhere in the strategy, Port Salford is compared to the ‘Panama Canal’, in that it will be capable of accommodating larger ships.

The GM Framework also proposes “around 263,400 sq m of office floorspace and around 8,200 new dwellings” at Salford Quays during the period until 2037.

Elsewhere in the huge document, which covers everything from environment, to jobs and transport, it’s acknowledged that “Over 50,000 properties in Greater Manchester have a 1% chance of flooding from main rivers in any year” with thirty per cent of such properties located in Salford.

There’s also a statement which appears to be opposing fracking in Greater Manchester… “It is therefore considered prudent to not exploit new sources of hydrocarbons and keep fossil fuels in the ground so at this point in time Greater Manchester will not support hydraulic fracturing (fracking).”

But it is the building of thousands of properties on Green Belt land that will form the main arguments around this new Revised Greater Manchester Spatial Framework.

“Now is the right time for pushing forward on our ambitions set out in the Greater Manchester Strategy” states Andy Burnham in the introduction “…Crucially, we want everyone to have green space to enjoy and clean air to breathe…Since the first version was published, we have listened carefully to what people told us. Planning will always be a difficult question of striking a balance between creating new homes and jobs and protecting the environment.

“This radically-revised GMSF is as much a vision for the environment and quality of life of Greater Manchester as it is for new development” he adds “It cuts the loss of Green Belt by over half, introduces new protections on other green spaces and a presumption against fracking in Greater Manchester. It is a prospectus for more sustainable development whilst not diminishing our ambitions for growth in housing and employment…”

First published in the Salford Star on 7 January 2019

For links to the full Draft Revised Framework, details of the consultation and more information – click here