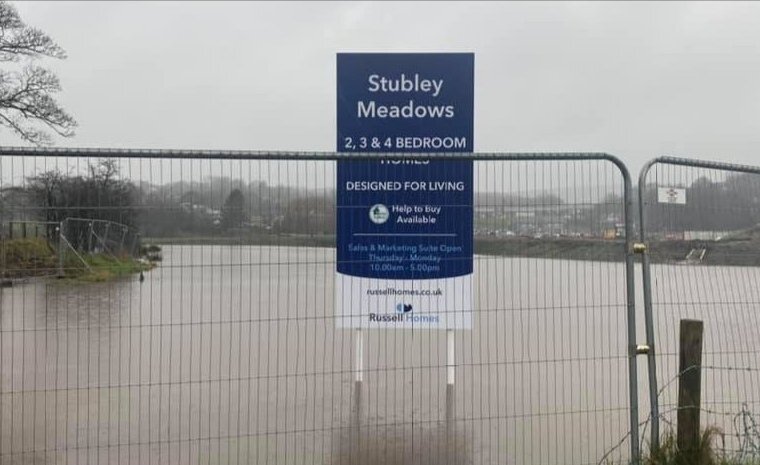 Storm Christoph showed that Manchester is susceptible to the adverse effects of extreme weather events, which are forecast to become more regular occurrences.

Greater Manchester Labour for a Green New Deal argue that we must abandon the idea of developing on greenbelt, and instead embrace bold alternatives which reflects the urgency of the climate crisis﹣starting with sites like Carrington Moss.

In the wake of the deluge, thousands of Twitter users shared images of high water levels at Stubley Meadows in Littleborough near Rochdale, where 96 homes are being built. Russell Homes, the developer of the site, has said it is not building any homes in the submerged area shown in the photo, and insist the images posted actually show onsite flood water drainage systems are working. Nevertheless, locals have expressed concern about the development on this particular site which is at a high risk of flooding, and the way the image went viral shed light on widespread dissatisfaction from citizens in Greater Manchester about building on flood plains.

Indeed, Stubley Meadows was no isolated incident. Developers are building on sites at risk of flooding across the conurbation, from Carrington Moss to Ryebank Fields. This is symptomatic of a broader issue of building on greenbelt land in Greater Manchester. This is itself a function of the UK government’s requirement for local authorities to provide a five years’ housing land supply. This explains why the Greater Manchester Spatial Framework (GMSF) releases so much of the city region’s precious greenbelt; a purported lack of brownfield land in the city region means the Greater Manchester Combined Authority must release greenbelt to meet the government’s requirement.

However, this imperative hinges on the argument that Manchester needs more employment, specifically office space. But with more people than ever working from home, Covid spells a weakening of the city centre-centric, office-based economy. Fewer workers are commuting to and from their places of work because of the pandemic. Even after the health threat from Covid-19 is over, it’s likely that many employers will continue to allow staff to work from home, given the cost savings. The predicted growth of office space and homes in the region may need to be recalculated, along with reconsidering where these buildings are best placed.

The latest release of the GMSF in 2020 has reduced the amount of Green Belt that will be released to build on, but it still reduces the overall coverage of Green Belt in GM from 46.9% to 45.3%, a drop of 1.6% which is equal to 1,939 hectares, or 2,693 full sized football pitches. This is still too much given the changing economic landscape. As one Manchester councillor put it at a council planning committee meeting in November, it would be “contextually illiterate to consider that there will not be permanent changes to the local… office market resulting from Covid-19.”

Reallocating brownfield sites earmarked for offices to provide housing would help councils meet the government’s housing land supply requirement. Evidence shows that Greater Manchester’s 1,500 undeveloped brownfield sites could deliver more than half of the 201,000 homes the GMCA wants to build by 2024. We stand with Friends of Carrington Moss in calling for a post-Covid review of land supply in Greater Manchester, to determine how much land is really needed in the city region for offices.

Even if councils and developers concede it is unnecessary to build on greenbelt, they will argue that the development of greenbelt land is more profitable due to the comparatively higher costs of surveying, de-contamination and clearing of brownfield sites. However, many of our greenfield locations carry hidden development costs. Geo-environmental appraisal reports carried out on land adjacent to Carrington Moss, for example, have found traces of cyanide, arsenic and asbestos, speculated to be leftover from the Shell chemical works nearby. The claim that greenbelt development vis-a-vis its brownfield counterpart is a comparatively cost-effective venture is not always the case.

This kind of sleight of hand obscures the injudiciousness of brownfield site development. Take flood risks as an example. Currently, there are huge disparities between flood risks noted by government services, and the reality experienced in the communities around development sites. A pertinent example of this can be found in the government planning assistance service, offered to developers to help assess risk to future developments. This service only rates flood risk from river or sea, leaving sites that are renowned for surface flooding﹣like Carrington Moss﹣to be green-lighted for development.

As Storm Christoph showed, Manchester is sitting on an extreme weather bomb when it comes to flooding. We simply must improve our climate resilience by managing the flow of water through the environment. The best way to do that, as the former head of the Environment Agency has said, is by conserving flood-prone greenbelt in the form of wetland habitats﹣not by building on it.

Peatlands like Carrington Moss are also precious natural assets for combatting the dual environmental crises of climate breakdown and biodiversity loss. Peatlands not only absorb large volumes of water, making them an effective tool for flood defence, but are also invaluable carbon sinks, with the ability to store up to ten times the amount of atmospheric carbon per hectare than any other form of vegetation. Leaving peatlands undisturbed is one strategy that leaders like Andy Burnham can use to reduce our carbon emissions.

Peat bogs are also low nutrient ecosystems on which biodiversity relies. Destroying peatland causes an influx of nutrients, particularly phosphorus, which can lead to the destruction of plant species vital to the survival of local fauna. Numerous plant species within Carrington Moss provide shelter and food to countless invertebrates, which in turn provide the vital food source for birds found in the area, many of which are currently on the IUCN red-list of endangered species such as the willow tit. Development will destroy their habitat and contribute to their extinction. It is simply unconscionable for the Greater Manchester Combined Authority to allow the destruction of peatland to go ahead, given the staggering biodiversity loss we have already seen in the UK.

Instead of exacerbating the environmental issues of extreme weather events and biodiversity loss by concreting over mosslands and flood plains, we should be giving serious consideration to the alternatives. There is a growing cache of credible alternative development sites on brownfield locations. Several of these sites, as discovered by Friends of Carrington Moss, are not listed on government brownfield site surveys, such as the huge disused site of the Cartwright Group manufacturers in Trafford. It is likely that other suitable sites are also not listed as brownfield.

In addition to alternative development sites located for housing, there have also been alternative sites raised for infrastructural development and transport strategy. Much of the prospective road development also crosses flood-prone moss land that remains un-noted by current records of land supply. Friends of Carrington Moss have included in their development plan a suggestion to upgrade current traffic routes, which circumnavigate the moss and surrounding villages, and to build a bridge over the Ship Canal and linking directly to the A57, which then links to the M6 and the M60.

This alternative land supply is not only effective at addressing local environmental concerns, but also provides a genuinely more effective development strategy by pointing to direct access to amenities and schools in Irlam, at the other side of the shipping canal. Despite the claims made on the developer’s website, who have no plans to build schools or amenities themselves, the current plans only provide access to schools in the urban centres to the east of Carrington that are already stretched in terms of class sizes. This would have the added benefit of creating good green jobs, enabling the site to act as a potential hub for the transition to the manufacture of renewables and supportive technologies.

We, nor the Friends of Carrington Moss, are anti-development. We want to see the demand for housing and employment met through a rationally planned use and distribution of available land resources that carefully balances environmental, economic and social concerns. Considering what is at stake these are reasonable demands, amidst an irrational planning system commanded by short-termist stakeholders.

By Greater Manchester Labour for a Green New Deal

This article was amended on 11th February 2021 to clarify that the development at Heath Farm Lane is a brownfield site lying adjacent to Carrington Moss, rather than greenbelt on the site as the article said originally; as well as to clarify that the Ship Canal bridge which Friends of Carrington Moss calls for links directly to the A57, which in turn links to the M6 and the M60, rather than linking to the M6 directly.