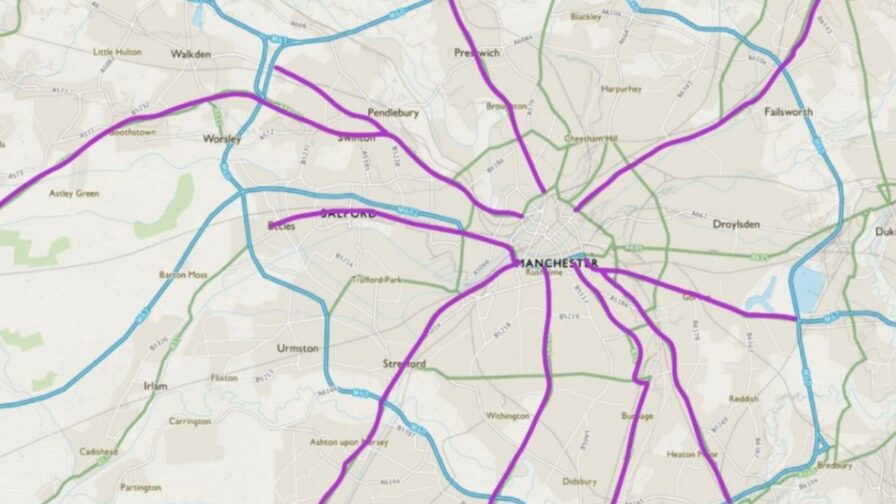 Proposals to install more than 100 km of ‘pop-up’ cycle lanes across Greater Manchester are welcomed by campaign group WalkRide. The plans, if implemented, will enable more people to travel safely during the Covid-19 crisis, and will keep pollution, congestion, and emission levels low.

Walk Ride Greater Manchester today welcomed news that leaders are planning to install more than 100 kilometres of pop-up cycle lanes across the city region to help workers get in and out of Manchester safely.

With more than ⅓ of residents in the region without a car, and people being told to avoid public transport due to Covid-19, it’s a vital step to provide transport for the lowest paid people, including many key workers.

The measures mean that those who can and want to cycle will feel able to do so safely, thus keeping pollution, congestion and emission levels down.

Walk Ride GM said: “The government has urged local authorities to make more space for people walking and cycling in rapid fashion, so it’s great to see the region’s leaders stepping up in this way.

‘‘Without these measures it will be the least well-off who suffer the most. A third of residents do not own a car so without steps to help people cycle safely, the lowest paid – who are the least likely to own a car – will either be denied safe travel or forced to break distancing guidelines.

‘‘We need to provide these alternatives so people can make journeys safely, because we know that fear of road traffic is the main reason people choose not to cycle.

‘‘But at the same time this can also be a big step towards keeping hold of the quieter, less polluted streets we have seen during lockdown – nobody wants to go back to the bad old days of congestion and pollution, and these measures keep more cars off the road at a time when we know pollution also adds to long-term health issues and worse outcomes for those ill with Covid-19.”

With cycling up 42% in the region, and more than 400,000 people living within four miles of the city centre (20-30 mins on a bike) pop-up bike lanes are the obvious, greenest, cleanest, fairest way to help people, especially the lowest paid, make essential journeys as the region begins its recovery for the outbreak and surrounding restrictions.

Earlier this month, Liverpool announced more than 100km of pop up cycle lanes, but Greater Manchester’s scheme looks set to be even more ambitious, if all the 10 borough leaders go ahead and give it their backing.

Trafford leader Andrew Western last week announced that a seven-mile stretch of the A56 would be closed to vehicles and dedicated instead to people on foot and bike to ensure those that usually rely on public transport and don’t have a car, have a means to access work in the regional centre.

But it’s now been revealed that the A56 route – which will run from Altrincham all the way into the centre of Manchester – is just one of 10 being planned, including the A6 from Stockport, which has no tram service into Manchester, and others from Salford, Bury, Tameside and Oldham.

Salford’s scheme focused on the A6, linking in with temporary measures already started on Liverpool Street.

The routes are being planned in line with the government guidance released on 9 May – which states ‘Local authorities should take measures to reallocate road space to people walking and cycling…. as swiftly as possible, and in any event within weeks’.

The Greater Manchester Combined Authority released an emergency #SafeStreetsSaveLives fund of £5m so each of the 10 boroughs could install £500k’s worth of pop-up schemes, and this has helped pay for initial measures, the most high-profile of which was part-pedestrianising Deansgate in Manchester city centre and widening pavements into the road near Piccadilly station.

And last week a further package was announced by the government to support safety on high streets, bringing another £488k into Manchester, £220k to Trafford and £260k to Stockport.

So far in Manchester, leaders have spent the money expanding pavement space for pedestrians and have not yet implemented any protection for people on bikes.

Indeed this week, the city’s showpiece Oxford Road cycle route – which sees more than 5,000 journeys a day – is even being closed to become a footway, with those on bikes asked to cycle in the bus lane, which is one of the busiest in Europe.

Walk Ride GM said: “Measures are needed to expand footways and remove the ability for vehicles to park on pavements – but does this have to be at the expense of protection for people on bikes, especially at a time when record numbers are using them to get around and this new pop up network is being rolled out?

“This is a flagship route used by thousands of people a day, including many key workers who work at Manchester Royal Infirmary.

“We do not understand why Manchester City Council would remove this key cycle route that is used by many key workers to travel to MRI, right at a time when other cities in the UK such as Leicester are creating cycle routes to hospitals – and we’re asking for the council to reconsider if a different approach can be taken that also protects those on bikes.’’