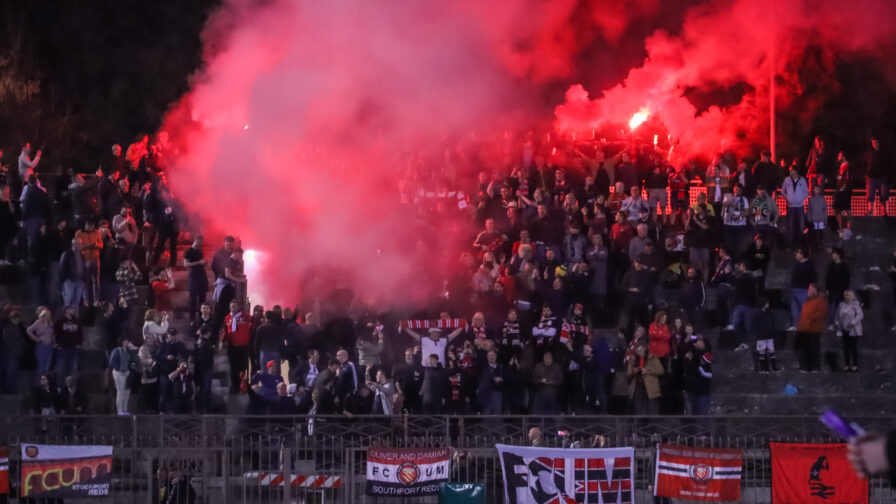 One hundred and forty-four years on and, just up the road, the football club founded by Manchester United supporters disillusioned with the Glazer takeover and the greed of modern football in 2005 – FC United of Manchester – recently announced plans to redevelop the space under the St Mary’s Road End terrace of its Broadhurst Park ground in Moston. The redevelopment will accommodate the expansion of its academy and significantly improve the club’s educational offering to young people in North Manchester.

The FC United academy currently offers a full-time education and training programme for boys aged from 16 to 18 with ninety percent of students drawn from within a three-mile radius of Broadhurst Park. The redevelopment of the St Mary’s Road End, which was approved by the club’s board in February, will include three classrooms, new flooring, additional toilets and a canteen, which will facilitate the club in providing an improved learning environment for up to 120 students and enhance the club’s reputation as a place of education.

This educational offering will also soon be accessible to local girls with the establishment of a women’s academy from 2023. After a two-year period when education has been seriously disrupted by the pandemic this represents a significant boost for education in the local area following the closure of the Manchester College’s apprenticeship unit in Moston in 2017 and one that is supported by Manchester city council.

Similarly the club and a group of Moston-based supporters have also been working closely with the nearby Miners Community Arts and Music Centre, a much-loved creative space in the heart of an area battered by a decade of austerity, to ensure that both organisations continue to thrive in challenging times.

The club’s plans for its academy will, however, mean that it no longer has space to host the food hub which has been based under the St Mary’s Road End terrace since it was established as an emergency response to the Covid pandemic in March 2020. Over the last two years the food hub has delivered regular much needed support, in the form of food and other essential items, to around 200 households and more than four hundred people across North Manchester including people self-isolating, others with mental health problems and families who had run out of cash as they awaited financial support from the government.

The food hub received a Special Recognition Award in June 2020 from the High Sheriff of Greater Manchester – who described it as “a lifeline for many vulnerable people” across North Manchester and it was also one of only three projects shortlisted for the Football Supporters’ Association’s Lockdown Heroes Award in February 2021.

On the pitch the undoubted highlight of this season has been FC United’s men’s team blazing a trail, reminiscent of Matt Busby’s Manchester United in the fifties, as England’s only representative in the Fenix Trophy, a new European competition for non-professional clubs.

FC’s first match in the tournament last October saw them play AKS Zly in Warsaw and in April more than three hundred supporters made the trip to Milan to watch their side beat Brera, Milan’s third team, 3-1 in the beautiful Arena Civica, the oldest stadium in Europe.

The tournament which features eight clubs from seven different European countries, chosen for their “exceptional social, historical and cultural distinctiveness”, will conclude with a finals weekend in the Italian seaside resort of Rimini in June where FC, barring a heavy defeat in its final group match at home to Brera, will play in the final.

Another highlight was the women’s team, formed a decade ago, making their debut in the fourth tier of women’s football this season, alongside the likes of Leeds United and Newcastle United, and unusually for the women’s game, playing almost all their home matches in their club’s main stadium – a reflection of FC United’s refreshing commitment to women’s football.

Meanwhile in the Northern Premier League some impressive mid-winter displays – including a 2-1 win at eventual champions Buxton – hinted at a push for promotion by the men’s team but patchy form towards the end of the season meant that the club finished in ninth position in the table – ten points shy of a play-off place – in manager Neil Reynolds’ first full season in charge. An admirable effort for a club with one of the smaller playing budgets in the division and there were plenty of matches to savour.

One such occasion was the visit of Basford United in March when Moston punk rockers The Battery Farm played a blistering set of “doom punk” under the St Mary’s Road End terrace prior to the match as part of the club’s regular “club night in the afternoon” Course You Can Malcolm which is pretty much unique in English, if not European, football featuring bands, musicians, poets, writers, comedians and other acts giving up their time for free on a Saturday afternoon all accompanied by local ales and homemade food. Half an hour earlier the club’s recently appointed chief operating officer Natalie Atkinson had taken to the same stage to hold a Q&A session with supporters where she highlighted the importance of business planning and commercial strategy – something that the club formed in opposition to “outright commercialism” has struggled with to date.

On the pitch FC came from behind to beat Basford 3-2 in an entertaining match that was watched by a crowd of more than two thousand including dozens of local youngsters admitted for free on the club’s annual Youth United Day. The whole day offered a glimpse of FC United in microcosm – an entertaining, affordable “punk football” alternative to big football that supports its local community and doesn’t neglect its red Mancunian roots either. But at the same time there’s a recognition that there are some things that the club can and must do better.

Although FC United’s food hub won awards, it also attracted some criticism. In May last year the revelation that the Far East Consortium, a property development company based in Hong Kong but registered in the Cayman Islands and the Council’s partner in the Victoria North regeneration project, had made a donation to the food hub and secured a place on the club’s community working group provoked a furious reaction from many supporters disgusted that the club that prides itself on “making friends not millionaires” had entered into any relationship with a tax haven registered company.

The Consortium’s development plans in the city had also forced the homeless charity Lifeshare, who had worked with FC United for many years on the club’s annual Big Coat Day collection of warm clothing for homeless people, to move out of its base on Dantzic Street. It led to a long-running debate about the operation of the food hub and the resignation of one of the club’s elected board members.

Being a democratically run football club owned by more than three thousand fans means that, as board member Paul Butcher put it, “every mistake or misjudgement is scrutinised by supporters on the terraces, in the bars and on the internet and whilst this can be uncomfortable at times it’s in learning from these mistakes that the club grows and continues to demonstrate its founding principles as a community owned football club”.

FC United emerged from the worst of the pandemic in a strong financial position reporting an operating profit of £309k in 2020-21 and began this season with more than half a million pounds in the bank – buoyed by a range of one-off support measures to see it through an extended football-less period including the furlough scheme, grants and donations. And it has used this position to strengthen its senior management team with men’s team manager Neil Reynolds becoming the club’s chief executive officer and the aforementioned Natalie Atkinson, the former CEO at Curzon Ashton and Southport, appointed as chief operating officer in February.

However the club has struggled financially this season as, once again, it has under-performed commercially. Despite the backing of more than three thousand co-owners (making it the largest football club wholly owned by its supporters in the country), average crowds of 1,800 and a social media following that wouldn’t look out of place in the Football League the club continues to struggle to attract sponsors and advertisers – and this will arguably be the biggest challenge for its management team in the next few years.

There are no wealthy backers ready to pump money into the club to chase promotion – like Buxton have successfully done this season – instead the club relies on the collective strength of its co-owners. With fan ownership comes a caution that prioritises the long-term sustainability of the club.

But as FC United looks to the future and begins to implement its long-term vision – based on the views of more than seven hundred of its co-owners – this is an exciting time for the club.

A recently established committee structure spanning football, community, commercial, communications, co-ownership, strategy, and governance matters which is staffed by more than sixty of the club’s co-owners volunteering their expertise and time for free – will seek to support the board and management team in implementing the long-term vision.

Promotion is one aim – the majority of fans said they’d like to see FC United promoted in the next five years – but providing an affordable alternative to big football offering a vibrant match day atmosphere and supporting its local community remain just as important to the club’s supporter-owners.

Jonathan Allsopp is a member of FC United of Manchester

The Fenix Trophy match against Brera FC is at Broadhurst Park this evening at 7:45pm, for more information – click here

To find out more about FC United of Manchester – click here