Francis House: supporting children, with life-limiting conditions, and their families 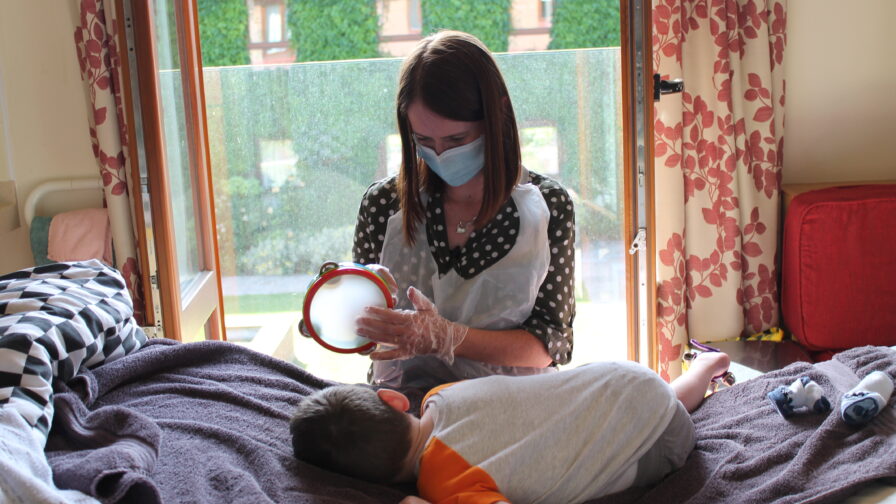 As the only children’s hospice in Greater Manchester, Francis House gives families the peace of mind and support to help children with serious health conditions and provide end of life care when they need it.

Austerity hit public services hard in Manchester, leaving many vulnerable people without the support they need. The Covid crisis has compounded the damage done and just like austerity it hits disadvantaged and vulnerable people the hardest.

Many community groups and volunteers are stepping up to help fill the void created by the deficit in public services. The charity Francis House Children’s Hospice is one of these organisations, providing appropriate care for children and young people with life-limiting and life-threatening conditions and the necessary support and short-term rest for their families. Services include respite care, homecare, day care, sibling support, parental support, end of life care and bereavement support.

“There are approximately 49,000 children and young people in the UK who are living with life-limiting conditions”, says Karen Flower, PR Officer for Francis House who explains that in spite of a shortfall of £250,000 in fund raising due to Covid, Francis House still manages to support about 2,000 people at any one time.

“Francis House – where have you been all my life?” was the moving response by Sumaira Mahmood when she recollected how the lives of herself, her ill son Hasan, and Hasan’s twelve year old sister Maria were touched by Francis House. Her son, Hasan, died in July 2020, one month before his sixteenth birthday. She said:

“When I stayed with Hasan and Maria on my first visit at Francis House, I felt that the staff took the caring responsibility very seriously. I was relaxed because I felt Hasan was in safe caring and professional hands.

“I saw Maria feeling comfortable with other siblings who have disabled brothers or sisters. I could see the confidence in her face when she realised that she was not the only child whose brother could not walk or play with her and that it was normal to feel the way she was feeling. It melted my heart that she experienced things that we could discuss with each other.

“Maria loved staying at Francis House with her brother Hasan and it gave me a peace of mind that no other place gave me”.

Younger sister Maria was so inspired by her experience that she took part in the Francis House New Year Winter Wander and raised more than £3,360 to enable other families to receive help.

One of forty children’s facilities around the UK, Francis House Family Trust was established in Didsbury, Manchester in 1990. Originally a Roman Catholic initiative, the then bishop of Salford Patrick Kelly, who later became archbishop of Liverpool, recognised the need for the hospice to be for people of all faiths, and no faith backgrounds.

On completion the building was named “Francis House” to commemorate the sacrifice made by the sisters of the Franciscan Mission of St. Joseph who gave up their convent to be converted into the hospice. Founder, Sister Aloysius, was concerned about the lack of palliative care for the families of children with a short life expectancy.  With her vision and determination, in less than two years the seven-bedroom Francis House was opened on the 25th of November 1991 by Diana, Princess of Wales. The charity claim this was the fifth children’s hospice to be built in the UK, and worldwide.

Kirsty Howard, a previous recipient of Francis House care, was born with a rare back to front heart condition and raised £5 million to secure the future of Francis House. Kirsty received respite from age three and lived to see the opening of the teenage and young adult unit, Francis Lodge, in 2014. She died aged 20 in 2015.

Francis House Children’s Hospice supports families from across the whole of Greater Manchester and is the only children’s hospice in the region.

The criteria for acceptance at Francis House are that the sick child has a life-limiting/life-threatening condition which means they have a short life expectancy and that they have been referred and accepted prior to their 16th birthday. Once accepted the young person is not transitioned to adult services as they grow older and are able to continue receiving respite care, symptom control, and end of life care for as long as they choose, or until their death. Medical interventions have enabled children with complex care needs to live longer – although very few live beyond their thirties.

Karen explains that “caring for a child with complex conditions can put a huge strain on families. This means that a great deal of the support is in the form of respite care, giving the families a well-earned break, enabling them to recharge their batteries ready to continue their unremitting twenty-four-hour care.”

The hospice building contains seven colourful children’s bedrooms, large comfortable lounge, computer room, hydrotherapy pool, Snoezelen multi-sensory room, soft play and creative therapy rooms, kitchen where all meals are prepared for the families, cinema room, chapel and seven family flats with kitchen facilities, which allow the whole family to stay for short periods of respite. The building is also surrounded by large gardens with play areas and also has three Rainbow rooms bereavement suites, which are specially cooled rooms that allow the young person to remain at the Hospice after death, and until the funeral, according to family’s wishes,

Francis Lodge, the teenage and young adult unit is a parent-free zone of seven further bedrooms, communal lounge, state of the art cinema room, multi-sensory room, kitchen, and terrace. Francis Lodge was officially opened by the Duke and Duchess of Cambridge in 2016.

The help Francis House offers is not limited to their building, they also have a homecare team which allows families a few hours break in their own homes.

It costs £12,876 per day, equal to £537 per hour, to run the hospice and the total cost for a year comes to £4.7 million. Karen says that “88% of income comes from charitable donations through the generosity of the people of the Northwest. Out of every £1 spent 86p goes towards charitable work.”

During the pandemic, the government provided emergency assistance to all hospices in addition to the NHS England annual grant.

Currently more than 500 families of children, teenagers and young adults with life-limiting and life-threatening conditions are supported by Francis House with between 300 and 350 families using the hospice for respite care and approximately 220 families are receiving some form of emotional and/or bereavement support.

During lockdown and with families shielding, planned respite was put on hold and social emergency respite to children and young people provided. Telephone support to families increased and end of life care and use of the Rainbow Rooms and bereavement support continued to be offered.

In 2020, from March to October, there were more than 6,000 calls of telephone support provided, 204 sessions of bereavement support, seven bedrooms were converted to Covid-19 safe suites and 113,000 individual items of PPE were sourced.

But Covid meant that about only one third of families who use the hospice came for breaks and additional costs were incurred for specialist equipment and training to protect the staff as they carried out their duties in a very different environment. Along with cancelled fundraising events  there was a shortfall in income of £250,000. Supporters took to innovative ways of fundraising by taking part in head shaves, virtual quizzes, lockdown marathons, and static bike rides.

Donations are needed to fund the more than 55 members of the specialist care team consisting of registered nurses, social workers, play/creative professionals, and occupational specialists along with volunteers to help with fundraising.

There are plans to expand and develop the Emotional and Bereavement support programmes as a result of isolation experienced by the young people themselves and their siblings through lockdown.

If you think that you could benefit from seeking help at Francis House or would like to help out by donating or volunteering, contact them at:

To find out more about getting involved in Francis House events: click here.

This article is part of the Mancunians Going the Extra Mile to Help Those in Need series, focusing on the essential work charities are doing in Manchester.  For other articles in the series – click here.