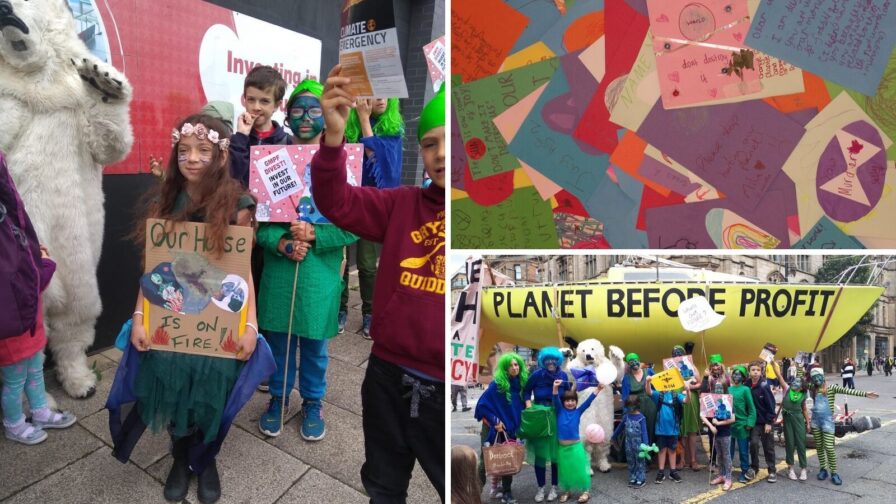 On Monday 2nd Sept, Rising Up family group visited the Greater Manchester Pension Fund to give cards that children had made asking them to stop investing £2billion in fossil fuels. Lillia Adetoro, 10-year-old climate activist, read out a poem on the day and is seeking a meeting with the Pension Fund’s chair, Cllr Brenda Warrington, to talk.

Fossil fuels, oh fossil fuels, where did you go?
I’m in the air,
Can’t you see me?
I’m flying to and fro!
Invisible to see.
But when the children cough and choke,  just know that it is me!

Fossil fuels, oh fossil fuels, where did you go?
I’m in the sea now changing the PH as I go!
The coral reefs turn white and die.
The colourful life that once was there, now vanished for none to see!
Black and sticky I ooze out of pipes, and escape into the seas!
Birds and fish weighed down and drowned –
– And yes! That too is me!

Fossil fuels, oh fossil fuels, where did you go?
I’m taking a summer holiday in the arctic, melting the ice and snow!
The sea levels rise.
The polar bears starve!
– and they’re heading to extinction because mankind rely on their cars!

The Amazon is burning!
The Arctic and Congo too.
Earth’s lungs are dying.
The Earth is SCREAMING out to you!!!

I’m getting kind of tired now.
There’s not much of me left!

It’s time to pass the baton to the sustainable future ahead.
I’ve caused so much trouble, but it’s really not my fault!
It’s humans not taking heed to the signs, and instead focus on their geed and want!

Will YOU break the cycle that’s killing mother earth??

Will YOU join the children and stop the hand turn??

We are running out of time!!!

We dearly need your help!

Will you join us??

Will you brave another path??

The children we are rising.
A force for all to see!

Come, join us on this journey.
Turn away from misery!