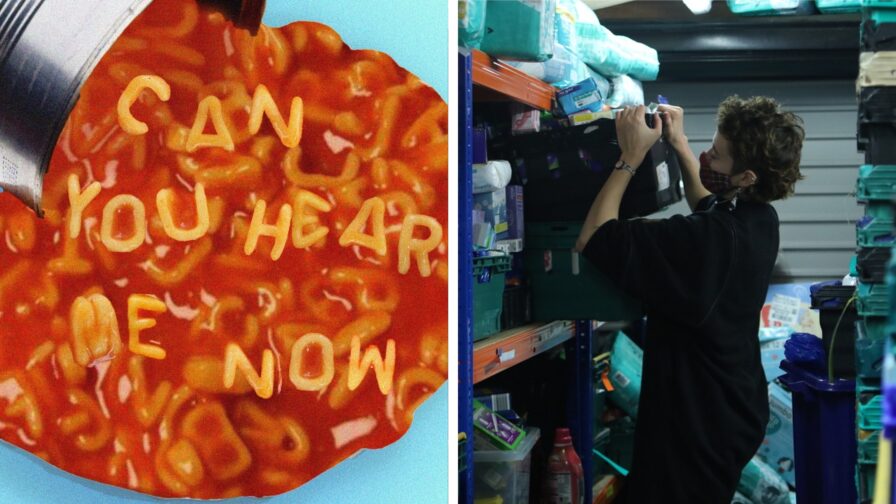 Can You Hear Me Now? Project aims to dismiss damaging stereotypes around food bank use, by giving voice to the users, and promote an ongoing discussion about how to tackle poverty across Greater Manchester.

“I thought food banks were for really hard up, really poor, deprived people. But’s that’s not the case and I know that now because I am one…It is people like myself”, said Francis*, who expressed their thoughts in an online collection of stories from food bank users called Can You Hear Me Now?

The project is a collaboration between the Manchester Central Foodbank and arts organisation Get It Done. It aims to platform the experiences of people living in food poverty with the objective to change policy as well as challenging unhelpful portrayals of food bank usage.

The UK is the fifth largest economy in the world, but that didn’t stop 700,000 UK households using a foodbank in 2019/2020 with a 85% spike during the Covid lockdown according to the report State of Hunger 2021, by the Trussell Trust.

Francis used to believe that those using food banks were from council estates, in trouble with the law, and wasted their money on drink or cigarettes. But Francis found themselves in a situation where they did not have enough to provide for their family. Through their own life experiences, they began to realise “in life there are things that go wrong…through no fault of peoples own.”

Another contributor to the project wrote, “I think what will surprise so many people is the diversity of experiences and there are so many different backgrounds of people and reasons why they are using the foodbank”. A further one said: “I don’t think that people are understanding the issue very well. I was told by the Job Centre that the only thing we can do for you is to go to a food bank.”

This reality observed by foodbank users does not match the perceptions of Tory politicians, who may have never experienced poverty, when they commented in the media on food bank users, reinforcing negative stereotypes and stigma.

Peer Lady Jenkin said: “Poor people do not know how to cook”. Darren Henry MP said people using food banks: “struggle with managing their money”. While Michael Gove when he was education secretary came under fire from the Labour Party, for “insulting” food bank users, by saying:

“It’s often as a result of some decisions that have been taken by those families which mean that they are not best able to manage their finances.”

Therese Coffey MP and work and pensions secretary suggested to parliament that foodbanks are a solution to poverty by saying they are the “perfect way to try and marry the challenges that people face in difficult times”. All these statements perpetuate the negative stereotype of food bank users and show a lack of intent to eliminate the root causes of the need for food banks.

Mathew Stallard, chair of trustees, of Manchester Central Foodbank (MCF), feels that “these types of comments, when reinforced casually and by people you know and respect through social media, with no fact-checking or first-hand account to rebut, can paint a picture that these attitudes are more prevalent than they actually are, swaying people from looking at the problem from the point of view of the impact on specific human beings.”

Refuting the negative comments made by politicians, the Trussell Trust found that the lack of sufficient income has been the main driver behind food bank use, and they also challenged the negative stereotypes imposed on users.

The stereotypes vs the reality

Stereotypes challenged by the Trust include the fallacies that users are unable to budget, obtain free food or dog food to buy tattoos and cigarettes (used first by Edwina Currie), and that use of food banks causes dependency. The reality is that people may have as little as £4 per day to live on is a world away from these stereotypes. Trussell Trust research found that in the first quarter of 2020, the average income of a couple without children who needed to use a food bank, left them with only £8 per day after housing costs.

With this meager amount they not only have to buy food but pay for energy bills cleaning products and toiletries. Many will have to pay off advances given to them by the Department of Work and Pensions (DWP) caused by the 5-week minimum wait for Universal Credit. The Trussel Trust found that nearly half of foodbank users owed money to the DWP. These advances must be paid back in monthly instalments putting many families in debt from the very start.

Can You Hear Me Now?

Can You Hear Me Now? is a library of first-hand experiences by food bank users documenting the lives of people living in food poverty. The aim is to eliminate the stereotypes around food bank usage, to change minds and policy with the goal to end the need for food banks in the city. This library is the first stage of a bigger project that wishes to involve all Mancunians in creating new conversations around poverty.

“Many people now use food banks and there is no one type… we’ve spoken to dads who have lost their jobs through the pandemic, people experiencing mental health issues and signed off work indefinitely, asylum seekers desperate to contribute to society, university graduates trying to make ends meet, the list goes on”, says Mimi Dearing, creative project lead at MCF. She adds, “It is easy to ignore the problem and deny the reality of the growing number of people from all walks of life who fall upon financial crisis and find that the safety net of support that we all deserve is not sufficient.”

Food bank user Quinn* echoes these comments in the library, “Your circumstances can change, and when your circumstances change [the foodbank] is a method of a transition…a way of helping you to cushion the effect of you not having anything to live on.”

The library offers stories of individual experiences of stereotyping, difficulties navigating the system, and the stigmas around food banks. It also features accounts and photos of “A Day in the Life” of users. The archive additionally reflects the diversity of experience of food bank users. Dearing notes that, “Negative social attitudes and myths that food bank users are a certain type of person living in poverty fuel feelings of shame that discourage people from accessing support and ….without that support they will face longer term impacts on their finances, health, and wellbeing.”

Other foodbank users, volunteers, artists, writers, and poets, as well as prominent community and political figures, are currently being asked to contribute short reflections on food bank user testimonials, poverty, and the difficulties of the past year in Manchester. As part of the project, these collected reflections will be shared with the original testimony givers, inviting them to respond to create an organic and ongoing “conversation” within the city.

At the end of the year the archive and findings will be presented to Greater Manchester councils and politicians in an assembly event. The contributing food bank users will be invited to speak directly with policymakers to influence future social wellbeing policies for Greater Manchester.

“Children are unable to concentrate on their education, for the worry of hunger and when they will next eat is constantly on their mind” is part of a testimony in the project from a family liaison officer at a local school in Manchester.

According to Manchester Central Foodbank, the number of children they are supporting has almost trebled, from just over 1,000 in 2019 to over 3,000 in 2020. Children made up 38% of all the individuals they supported last year, a record high level. This huge rise in child poverty has resulted in MCF providing 5,500 meals working with 7 schools across the city. Eighty seven percent of parents receiving support said that the Covid crisis had negatively impacted their financial situation with 70% of the parents saying they received their first time charitable food provision during the crisis.

Apparently some Tory politicians are unaware of the growing problems and continue to spread negative stereotypes. Ben Bradley MP, linked those receiving free school meals with “crack dens and brothels” and Selaine Saxby MP, threatened to withdraw financial support to restaurants that would be giving free food vouchers to children in need. It took footballer Marcus Rashford’s perseverance to finally turn around the government’s decision to stop free school meals to children.

A long-term plan needs to be implemented to stop child poverty, but the growing number of struggling families need help now. The State of Hunger 2021 report lists children as one of the highest at-risk groups, stating:

“Larger families are increasingly likely to need to use a food bank as the impacts of the two-child limit policy continue to take effect and there is an overall cap on the benefits to which their families are entitled.”

Next steps for Can You Hear Me Now?

Can You Hear Me Now is projected to continue for another two years with the support of the Trussell Trust and the plan is to add to the archive to encourage conversations on poverty across Greater Manchester.

A series of art workshops related to experiences of poverty with the aim to improve mental wellbeing through creative activities will feed back into the archive, creating a platform and hub of foodbank narratives.

Another future project as part of Can You Hear Me Now is related to the proposed redevelopment of Piccadilly Gardens. Titled Placemaking Piccadilly, Dearing said of it:

“This project asks communities across Greater Manchester questions about who has ownership of our public spaces, how inequalities act as a barrier in accessing our public spaces and if our spaces reflect the needs of all Manchester citizens. A redevelopment of Piccadilly Gardens needs to be inclusive to the experiences of all citizens across Manchester, and especially those facing inequalities.”

In the new year, Stallard wants to “build towards regional and national-level influencing of specific policies as well as raising public awareness.”

One foodbank volunteer, after reading the stories in the Can You Hear Me Now library, wrote, “The biggest takeaway is that those you think would not need a foodbank sometimes do.”

Featured image :Can You Hear Me Now?