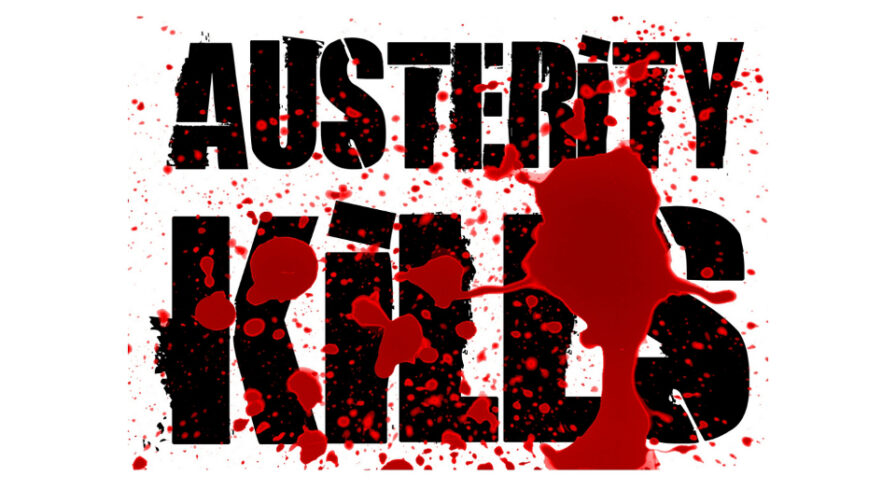 The authors of austerity are in town for their annual Conservative party conference. With their refusal to halt the roll out of Universal Credit it looks like they may be doubling down on their poverty-inducing agenda.

But three speakers at a Mary Quaile Club event provided evidence that the forces of iniquity can be resisted most effectively by collective action and urged people to use the lessons of the past, and present experience to promote a better future.

The public meeting was part of the Take Back Manchester Festival 2017, organised by the People’s Assembly in opposition to the Tory party conference. The festival’s rallying cry is: “No More austerity! Scrap the pay cap! For decent health, homes, jobs & education!”

The venue for the Mary Quaile Club event called Fighting Unemployment, Poverty and Austerity could not have been more fitting. The Working Class Movement Library in Salford is steeped in the history of collective struggle against an uncaring state and corporate forces.

Author Sean Mitchell was pleased to be able to talk on the subject of austerity, unemployment and resistance while the Tory circus was in town, saying in his strong Belfast accent:

Mitchell recounted stories from such a time, the streets of Belfast in 1932, where poverty was rife due to the ripple effects of the 1929 Great Depression combined with harsh state relief programs administered under the Poor Laws. Mitchell described these laws as being “set up in the nineteenth century, the sort of thing you would read about in a Charles Dickens book”.

The stories were taken from his latest book Struggle or Starve: Working Class Unity in Belfast’s 1932 Outdoor Relief Riots, which was available to buy at the meeting with 50% of the takings going towards supporting Charlotte Hughes’s The Poor Side of Life blog.

The Revolutionary Workers Group, a precursor to the Communist Party of Ireland, organised the huge numbers of unemployed and those signed up for the Outdoor Relief programs, which combined poverty pay and hard labour, into a coherent and organised force. This gave the Royal Ulster Constabulary a nasty surprise as they had discounted the group as useless, reportedly saying, “look at their paper, it’s pathetic. They are not going anywhere, they are not going to be able to organise anything; we could ban them but why bother”.

Tommy Geehan was one of the organisers of the strike that commenced on 3 October 1932, which managed to bridge the sectarian divide and saw Protestants and Catholics standing shoulder to shoulder demanding an end to the destitution imposed upon them. The strikers’ demands not being met forced them to become rioters, fighting pitched battles against police and building barricades and digging trenches to hold of the establishment’s assailants. Mitchell recounted a speech by Geehan to his comrades:

“Belfast has been divided by artificial barriers of politics and religion,” but he urged the workers to keep up the fight and said “We have got to win and we must not ask ourselves can we win, we must win, and no matter what the costs or sacrifices may be, we will win. Let our slogan be: No surrender to poverty, misery and destitution”.

Choose between eating and heating

The next speaker’s experiences of poverty and austerity are firmly rooted in the present. Charlotte Hughes has held a protest against austerity driven social security cuts every Thursday over the last four years. Setting up a stall outside Ashton under Lyne jobcentre every Thursday, she offers help and advice to the people attending the jobcentre, and recounts the often heart wrenching stories she hears on her blog The Poor Side of Life. The people she meets often “have to make that choice between heating and eating” says Hughes.

Ashton under Lyne was one of the initial trial areas for Universal Credit, so the people of Ashton have had a bitter experience of its failings, experiences soon to be shared by the rest of the UK. Hughes describes Universal Credit as, “an evil system… I call it the devil’s tool”. Hughes is also a member of the Greater Manchester Unite Community Branch, a modern day organisation of mainly unemployed workers, and the Manchester and Salford Branch of the National Union of Journalists.

Hughes is highly critical of the role the right wing media plays in demonising the poor and believes they have helped this government recreate “the Victorian concept of the deserving and undeserving poor”. She also sees parallels between present day England and 1930s Northern Ireland, saying:

“Our system is very much like the poor law system, people are terrified of it. We might not have the workhouse anymore but we do have other things, we have workfare, the work program, the jobcentre and we have universal credit”.

Nothing about us, without us

Chris Rea, chair of the Manchester and Salford branch of the NUJ, spoke of the current inadequacies of the media landscape in the UK and of the NUJ’s work to improve that landscape in the future. Rea’s branch of the NUJ produced an NUJ Guide to Reporting Poverty in response to the negative and stereotypical reporting on poverty commonly used in publications such as The Daily Star, The Express, The Daily Mail and The Sun.

The poverty reporting guidelines were produced with the guiding maxim “nothing about us without us” indicating the need to include the voices and views of those in poverty. Rea was under no illusion that this was going to be an uphill struggle as he described the current misuse of the media in reporting poverty:

“Reporting on poverty is ideological in its nature. Where it is used ideologically as a weapon, it is part of a larger battle taking place that is a war upon some of the most marginalised, disenfranchised and poor people in society. The media is used very deliberately by an establishment system that uses many other weapons. Charlotte has spoken about the weapon on the ground which is sanctioning and other aspects of the social security system.”

Rea went on to describe some of the major factors behind media abuse by what is often referred to as the mainstream media (MSM), saying that the MSM is:

“Owned by five extreme right wing billionaires. Two of them are very secretive: the Barclay brothers live over in the Channel Islands. Rupert Murdoch sits above a huge media global empire [including Sky & Fox Broadcasting] which includes The Sun. The Mail is owned by Viscount Rothermere, and has been in the family for more than a century. The Star and The Express are owned by Richard Desmond”.

“There is nothing mainstream about them at all, how can there be? They represent an extraordinary small minority opinion. The newspapers and all the media empires are part of a world view that they are keen to promote. And it is a world view that has a lot in common with the austerity neo-liberal state and a lot in common with the aims and objectives of the current government.”

Rea expressed his sympathy and concern for those journalists struggling to maintain ethical standards struggling against the pressures involved working within the MSM. He hopes the broad range of guidelines produced by the NUJ, alongside the NUJ Code of Conduct, will arm and equip NUJ members in their struggle to uphold ethical reporting standards in publications severely compromised by the biases of their owners.

Hughes suggested that people should not invest their hopes for change into one person or political party, and that the power to change the future for the better lay within us all, reiterating the old saying “you have got to be the change you want to see”.

Manchester and Salford branch of the NUJ – click here