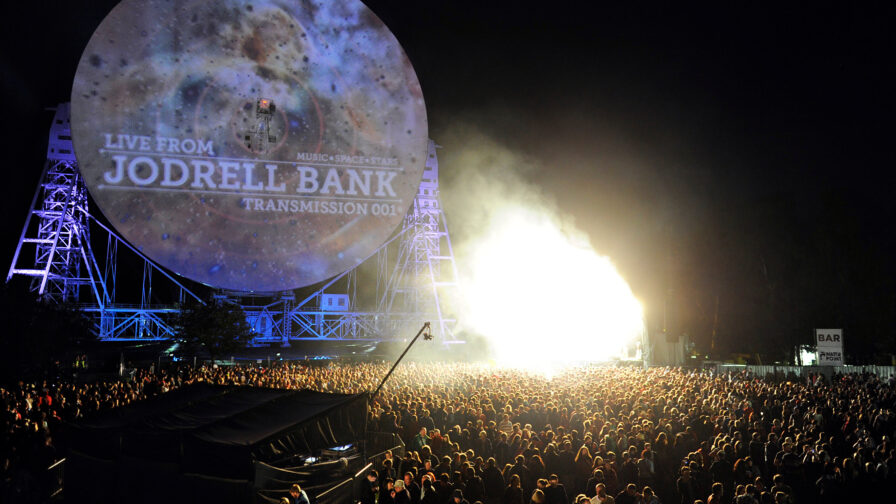 Manchester University’s Jodrell Bank Observatory, the site of many scientific discoveries which has been nominated as a UNESCO World Heritage Site, will once again host the award-winning Bluedot Festival of discovery this weekend.

Proceedings kick off in spectacular fashion on Thursday 19 July when the Halle Orchestra perform ‘The Blue Planet in Concert’, a special live version of the treasured BBC series. High definition footage from the show will be combined with a live performance of the original soundtrack, conducted by Ben Foster.

Sustainability is a key theme of the festival. The British Antarctic Survey will deliver a special Q&A session discussing how Blue Planet II helped bring the issue of plastic in the oceans to global attention, while live science shows such as Operation Earth and exhibitions in Mission Control such as Ocean Science, Society and Robots will educate audiences young and old on climate change.

Exhibitors such as The Carbon Impact of our Lifestyles and Practical Action will be there to show how researchers and scientists are working to protect the pale blue dot we live on. The Planet Field area of the festival will focus on ‘spaceship Earth’ and the ways in which we look after the only planet we can call our home.

Among a number of sustainability initiatives, Bluedot have declared that no waste from this year’s festival will be going into landfill, food traders will not be allowed to use plastic straws, plastic containers and plastic cutlery. Festival goers will also be given a chance to offset their carbon footprint, by donating money which will be completely invested in renewable energy.

Further BBC involvement will come from the Radiophonic Workshop who will be celebrating their 60th anniversary with live performance on Saturday, where familiar music from Hitchhiker’s Guide to the Galaxy and Doctor Who will be heard on stage.

The stellar music lineup has an eclectic mix of performers such as Gary Numan, Lamb, Little Dragon and Public Service Broadcasting. Roni Size will be leading a live performance of his classic album ‘New Forms’, whilst DJ highlights come in the form of sets from techno-electro queen Helena Hauff, Andy Smith’s Reach Up Disco Wonderland, and Homoelectric’s Will Tramp!.

The Roots Stage will be brought to the festival by Manchester’s Band on the Wall, in partnership with Arts Council England, and will see a three-day showcase of music from South Asia, emerging Urban Jazz talents, and Afro-Caribbean grooves.

The Flaming Lips will be performing their mesmerising and euphoric show on Friday evening, while frontman Wayne Coyne will be in conversation with Professor Tim O’Brien, Associate Director Jodrell Bank Centre for Astrophysics, and avid explorer of exploding stars.

The Science, Technology and Nature programme will include such luminaries as Dr Alice Robert’s, who will be talking about her most recent project ‘Tamed: 3 species that changed our world”, Mike Garrett who’ll be discussing the search for extra-terrestrial intelligence, and Jim Al-Khalil, president elect of the British Science Association.

Ana Matronic will deliver a talk to celebrate the 50th anniversary of 2001: A Space Odyssey, whilst there will be comedy from Robin Ince, known for ‘The Infinite Monkey Cage’, and spliced together humour from Cassetteboy.

Festival headliners The Chemical Brothers, will be performing their new live show in the UK for the first time. The duo, who met in 1989 at Manchester University, will bring to a fitting close the third instalment of Bluedot Festival.

See you front left, under the Lovell Telescope.

All images courtesy of Bluedot and Zeitgeist