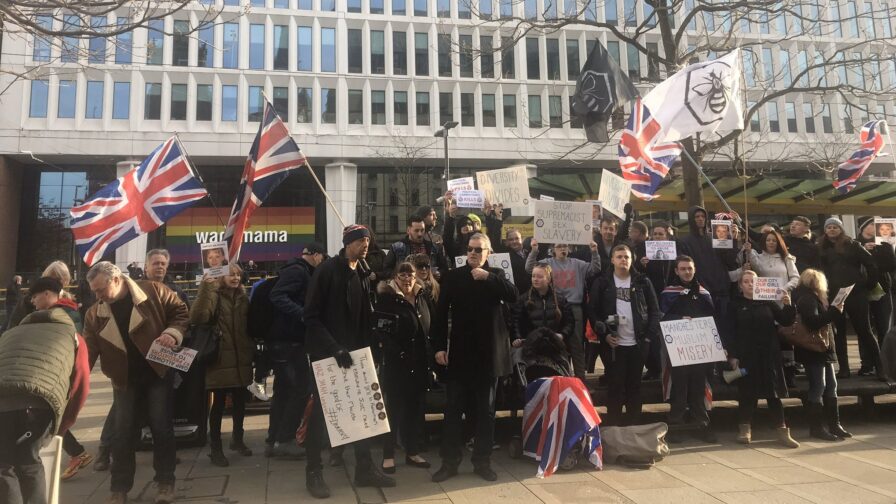 Katy Preen reports on who we really need to hold accountable for the failures to properly investigate and prosecute child sex abuse.

The report into the mis-handling of child sexual exploitation cases by Greater Manchester Police (GMP), and Manchester City Council’s social services department, was released in January this year. The investigation into Operation Augusta, which ran from 2004 to 2005, was commissioned by the Greater Manchester Combined Authority (GMCA).

It revealed under-resourcing of investigations into cases despite abundant evidence that could have led to trial. Failures by council run children’s services to take seriously the abuse of girls in the city’s care homes, were also identified. Speculation has led some to blame these failings on an over-zealous application of “political correctness”, i.e. that police and social workers were scared of intervening for fear of being labelled racist, due to the Asian ethnicity of the perpetrators.

The far-right have latched on to these concerns and used them as a justification for racist protests. On Saturday 18 January, James Goddard led a protest with around 30 supporters including children. Protesters held placards bearing slogans saying “Manchesters muslim misery” and “Integrate or emigrate”, other banners blamed political correctness for the failure of the police. Some were waving Union flags and carrying pictures of Victoria Agoglia, who died after being injected with heroin by one of the perpetrators in the Operation Augusta investigation.

Most of those accused of child sexual abuse during operation Augusta were of Pakistani Muslim heritage, a fact that the protestors wished to emphasise. The protest also co-opted other issues, with one protestor wearing a yellow hi-vis vest with “Brexit” and “Free Tommy” on it.

Local resident Pranil Raja was in the area when he encountered the far-right protest:

“It didn’t feel too safe to be honest, and there was a lot of shouting and abuse towards Muslim passers-by and people of colour. Some were called ‘paedos’ and told to ‘fuck off’.

“There was a young teenage lad who was part of the protest who wore a Union Jack flag as a cape and a board sign who was walking around, fairly close to me and kept glancing my way. I knew he wouldn’t do much harm but [I] felt as though he wanted me to leave.

“A lot of young children were involved in this protest. I feel quite sorry for them knowing that this is the fascist environment they’re growing up in.”

Greater Manchester Police were contacted regarding the protest. They said that they were not officially informed of the protest, there were no complaints or arrests and they did not intervene because “people have a right to peaceful protest.”

However, no evidence was found that authorities were failing to act for fear of stoking racial tensions in the case of the Manchester grooming gangs. Which undermines the St Peter’s Square protestors contention that this was a factor in the failure of the investigation.

As well as under-resourcing, the GMCA report found that a contributing factor to Operation Augusta’s failure was the lack of understanding in 2004 of the nature of child sexual exploitation and the multidisciplinary method of investigating and preventing abuse.

It was noted during the setup of Operation Augusta that GMP had recently dealt with an unrelated case involving a terrorist plot in the South Manchester Division area (Operation Zoological) “that had created community tensions and Augusta was to examine accusations against another minority group. However, the Senior Investigating Officer was categoric that any concerns about creating further community tensions did not influence any of his investigative decisions.”

Comments from police investigators and an MP on the Rotherham grooming gangs case suggest that the crimes there were not investigated fully because of fears of stoking racial tensions, in that particular case. These reports fuelled the public anger directed at British Asians and the police force that has resurfaced, in the form of James Goddard and his crew in Manchester’s response to the latest Operation Augusta scandal.

Such an emotive and devastating series of crimes, that resulted in an appalling failure of justice, were bound to send shockwaves through local communities. The far-right have stepped in to capitalise on this failure and promote their divisive agenda. For some of those whose concerns were ignored by the authorities, the far-right  are providing a listening ear and a means to direct their anger somewhere.

This is not the first time Goddard has caused trouble in Manchester. He was involved in a stand-off against Stand Up To Racism in Piccadilly Gardens in January 2019, which resulted in a conviction for assaulting a press photographer and a two-year restraining order. In July he received a five-year ban from Parliament Square after harassing pro-Remain MPs on their way to the House of Commons. In August, Goddard harassed anti-racism campaigners during a Peterloo memorial march, and in September he was arrested following a Labour Party rally, where he shouted at attendees leaving the event and hurled abuse at Jeremy Corbyn’s car.

When the crimes occurred (pre-2003), sexual exploitation of the girls was referred to as “child prostitution” by the authorities in their reports. The girls were not seen as victims of exploitation and rape, but consenting participants inviting the abuse upon themselves. This is indicative of the lack of understanding of how grooming gangs operate and select their victims, which existed at the time of the original investigation.

Speaking on BBC Newsnight, former detective Maggie Oliver said, regarding why the investigations were not made a top priority, “This is not just about children in care. This is about children who were perhaps seen as an underclass. That is as much of an attitude as perhaps the ethnicity of the offender and the children.”

Oliver noted that resources were a determining factor in getting complex cases like these to court: “Even today, we are hearing about the CPS only prosecuting the easiest of rapes to prosecute. If we use those kinds of criteria, all these grooming trials will never come to court, because they take time, they take resources, they take commitment.”

On the same programme, Nazir Afzal, former Chief Crown Prosecutor for North West England, said “To resource something, or to prioritise something, is a choice. So senior leaders in police, in local authorities, in other agencies, chose to allow children to be raped rather than deal with the offenders who were raping them. That is a terrible indictment of the way we were, and to some extent, still are.”

He went on to add, “If a Prime Minister says that spending money on historical child sexual abuse is ‘spaffing money up a wall’; that sends out a message to police officers and local authorities that perhaps they shouldn’t be spending money on this type of work.”

Regarding calls by Sajid Javid, during his time as Home Secretary, for research into the causes and cultural reasons behind gang-based child exploitation, and the high number of cases involving men of Pakistani heritage, Afzal said, “We need academically sound research to identify why this is happening, and who is responsible. And that can only happen when the Home Secretary provides us with the evidence that we’re seeking.”

As yet, this research has not been published. Speaking to the Huffington Post last week, Afzal said “I have been calling for an evidence-based review since I gave evidence in parliament in 2012, the promises have come to nothing. The vacuum is exploited by the far-right.”

This would appear to be the case with the nature of protests we have seen in Northern cities. With nobody in a position of authority speaking on the matter, there is a void of information that has been filled with rumours and gossip.

Local people were ahead of the police and social services on what was going on with grooming gangs in their communities. Combine this with the authorities’ inaction and betrayal of vulnerable girls that they had been warning about, and it’s easy to see why some would turn to a source that sympathised with them and listened to their worries. This is how the far-right have weaponised the fears surrounding race and child sexual exploitation in concerned communities, and used it to bolster their racist agenda.

While there are reports demonstrating the real factors in under-resourcing historic child sexual abuse, the narrative in many people’s minds is that the perpetrators were allowed to get away with it because of their race. In Manchester, at least, there is no evidence of this. The attitude displayed towards the victims, however, in Greater Manchester and elsewhere, was one that embodied classism and misogyny.

Indeed, the focus has been so much on race, that other failings are not receiving the scrutiny and outcry they deserve. The inability of the media to accurately report the nuance regarding Asian grooming gangs has led to a false dichotomy. Reports either claim that investigations were suspended for reasons of ‘political correctness’; or that all concerns about Asian grooming gangs are fuelled by racism.

The truth is that vulnerable girls were treated, by the police, as willing participants in their own abuse, and they were selected because the perpetrators knew that the authorities would not take their complaints seriously. This was proven to be correct in Rotherham, Rochdale, Manchester, and numerous UK cities and towns.

The failure of our institutions to act or communicate effectively on the matter of Asian grooming gangs has allowed the perception to develop that the safety of our children is being sacrificed in favour of ‘political correctness’. Understandably, communities are outraged that sexual crimes against girls are going un-investigated, and any suggestion that it could be simply to keep up appearances is horrifying. But it isn’t true.

We know better now. We have a greater understanding of how grooming gangs operate, and we correctly identify the victims of child sexual exploitation as victims and not “child prostitutes”. Although the hurt of the past cannot be undone, we can, and must, use this information to overcome the biases that led to child abusers openly terrorising our communities with impunity.

Now that the failings of GMP and Manchester children’s services are known about, we can look forward to lessons being learned and justice being done. That is where we should focus our energy, instead of turning to the far-right for answers. But any impediment to justice is sure to fuel tensions. The public are angry and want justice. We need to hold the correct people accountable – those in power who let us down.

For details of anti-racism campaigns in Manchester check out the Stand Up to Racism – Manchester, Facebook page

Children and young people with concerns around child abuse can ring ChildLine on: 0800 1111