Enough Is Enough: have we had enough of Prime Minister Liz Truss? 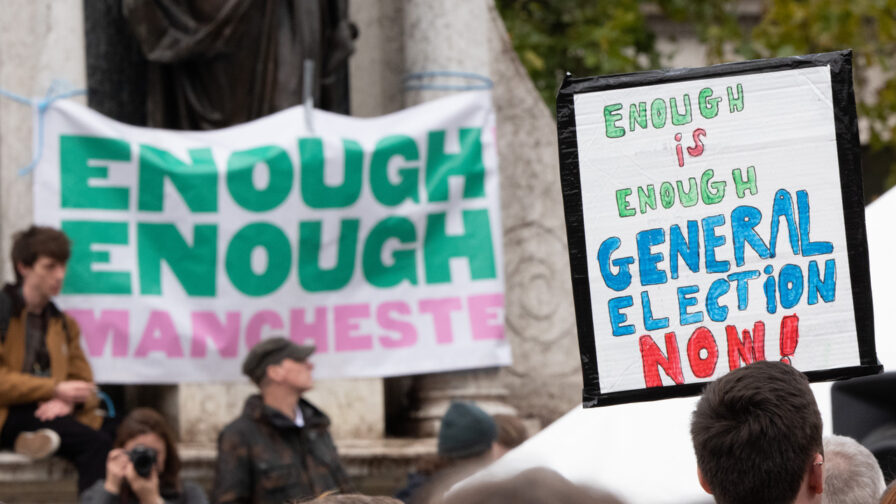 The new PM has only been in charge for one month, yet already there are rumours of a Westminster coup. Not only that, but the nation is in crisis. How long before her MPs and/or the public say 'enough'?

If Liz Truss decided to ignore the criticism of her recent ‘mini budget’, including mutterings from her own seasoned backbenchers, a brief visit to Manchester Piccadilly on Saturday 1 October would have shown her the wider public’s feeling of disquiet.

The demonstration, organised by the Enough is Enough campaign filled Piccadilly Gardens. After a march around the city centre, the speakers and musicians lined up to express their views on the government’s record on handling the economy and the cost-of-living crisis.

It is just over a month since the campaign was launched in Manchester  but the level of engagement is already showing a similar cohesive nature amongst associated campaign groups and the public, to that which helped topple the Leadership of Margaret Thatcher following the anti poll Tax demonstrations of 1989-90.

The demography, by age and social structure, of the crowd should at least give the government some pause for thought as those gathered included the young and old from across the region. This was no accumulation of left wing firebrands but a genuine outpouring showing fear and concern from the public. Grievances were expressed with spiralling household costs, the increase in poverty and a general feeling that the country is on course to be run not for the majority but for those that own the majority.

Jade from Didsbury, who was with the representatives from Don’t Pay Uk, expressed her thoughts to The Meteor:

“We are trying to organise a boycott, really similar to what happened with the poll tax. For us all to cancel our direct debits nationwide at the same time. In solidarity, with the 1.7 million people in this country who can’t pay their rising energy bills, we hope to force the government to listen to us. Mass campaigns have worked before and we think it will be able to work again.”

In answer to Liz Truss’s argument that she is helping out with the energy cap, Jade offers a firm rebuttal.

“No other country in Europe is having to deal with the amount of increases that we are having to deal with as the working class British people. We are seeing a doubling in price of our energy bills and that isn’t right and it isn’t fair. The energy companies are seeing bigger profits now than at any other time in their history.”

UK household electricity prices are indeed substantially higher than most of our European neighbours according to a recent report in the Financial Times. Coupled with poorly insulated housing stock in the region, many Mancunians are understandably already feeling the strain of the price increases even before the 1 October price rise.

James, a teacher from Manchester and a member of Acorn, who support the Enough is Enough campaign, voiced similar concerns:

“The world has been run for too long by people who don’t have the best interests of the majority. We can see this through the energy crisis that is looming this winter. We can see this in the government that are currently hell-bent on pursuing their own economic theory that is crashing the lives of everybody else.

“We can see this in the kids that I teach. They are coming to school and have not eaten. They have not got the right clothes on. They can’t support their own education because they haven’t got money at home. Poverty is the biggest driver of educational inequality.”

These sentiments are borne out by a recent report by the Institute for Fiscal Studies that shows that education in the UK is not tackling inequality. The report shows that children who are eligible for free school meals do significantly worse at every stage of school.

Unsurprisingly, a mention at the demonstration of Marcus Rashford’s campaign for extending free school meals eligibility drew an appreciative cheer from the listening crowd .

It is clear that Liz Truss has positioned the Conservative Party firmly to the right of the party’s spectrum since moving into 10 Downing Street. This has been noted by right wing commentators such as Stephen Glover who, writing for the Daily Mail, described Truss as “radical as Margaret Thatcher at her most radical.” An observation that the current Prime Minister may welcome, considering her predisposition to mirror the former Conservative leader.

Neoliberal trickle-down ideology again is a throwback to the days of Thatcher and Ronald Reagan, and has largely been discredited by modern economists as neither boosting the economy nor helping those economically at the bottom. Perhaps Kwasi Kwarteng’s Ph.D thesis whilst at Cambridge, ‘Political thought of the recoinage crisis of 1695–7‘, may not have been the best preparation for the Chancellor to run a modern economy.

Both Truss and Kwarteng have defended their stance, even as the markets perceived it as a gamble.

Judging from the mood in Manchester on Saturday, with similar protests held across the country, along with the growing disquiet in her own party, Truss may well be following in Thatcher’s footsteps: the ones she took on 22 November 1990.