Dozens of library jobs at risk in University of Manchester shakeup 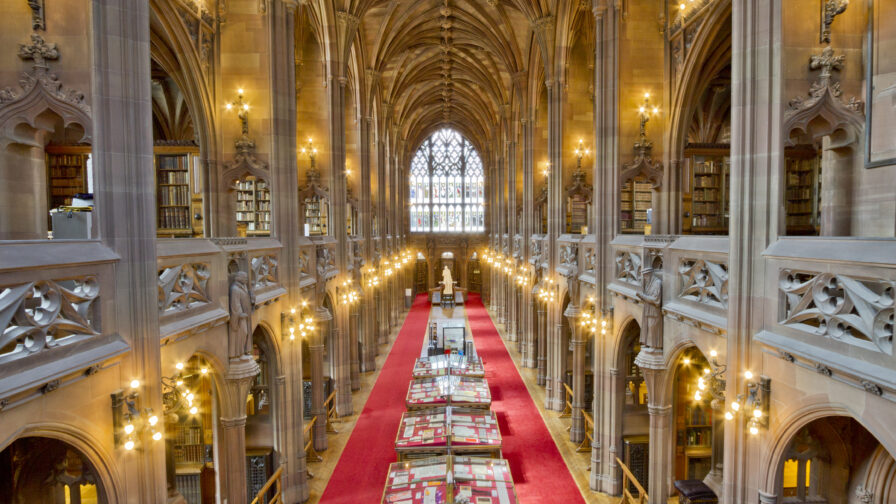 The John Rylands Library, a grade I listed neo-gothic landmark and one of Manchester’s most distinctive buildings, is one of many university libraries quietly undergoing a murky cost-cutting restructure which staff fear may cause lay-offs, and exclude families and young children in the pursuit of research funding.

The University of Manchester is undertaking a murky restructure exercise across its library services including John Rylands Library, which current staff say will lead to mass redundancies and reduce the public’s access to one of Manchester’s most cherished cultural venues.

The restructure is part of the university’s cost-cutting Library Reshaping Project. This will see the closure of four campus libraries – Joule, Stopford, Katorowich and Braddick – in a bid to save £9.9 million over the next five years.

The shakeup will also see mass redundancies. The university quietly stated on its staffnet website in May that some jobs would be ‘at risk,’ but did not disclose how many. An open letter penned by University of Manchester staff in the same month claims the restructure “could result in up to 38 redundancies” across the university’s library services.

Minutes from meetings between staff and Christopher Pressler, John Rylands University Librarian and Director of the University of Manchester Library, seen by The Meteor reveal that Rylands senior management is implementing the cuts in order to transform the library from a cultural venue geared towards the public into a research institute — with public access repurposed towards producing ‘impact case studies’ used to obtain more research funding.

Ryland’s senior management team seem concerned that the library has focused too much on the public and not enough on research. In one meeting Pressler claimed the Rylands had “veered more towards social responsibility to the detriment of research and teaching.” In practice, staff have been told to expect fewer visitors and potential reductions in public opening times.

Funding for Visitor Engagement is therefore also being cut, with one key member allegedly pressured to take voluntary redundancy, and others being tied to supporting research and promoting exhibitions.

Current staff told The Meteor they fear the transition may affect the quality of public access and waste the inspirational potential of the building. Helen* works at the Rylands and asked to remain anonymous due to avoid negative effects in the restructure.

“Cutting resources will inevitably reduce the number of people that can visit a building which was founded on the principle of being a place for everyone to enjoy,” she says. “We will no longer be able to provide services that visitors loved so much such as behind the scenes tours, toddler storytimes and family programming.

“It feels like our potential to be a leading visitor attraction in the UK is being wasted despite the hard work that we have put in to make it such a welcoming and exciting place to visit.”

The University of Manchester insists the Rylands will remain open to the public and an essential part of life and culture in Manchester.

“Public access to our wonderful Library is central to our vision,” it said in a statement to The Meteor. “[We will be] focusing our essential engagement with the public on our collections and our work as one of the world’s great research libraries we will continue to make visits to the John Rylands memorable and inspiring.”

Originally an independent opened in 1900, the Rylands was merged with the University in 1972. The university also owns other public visitor sites such as The Manchester Museum, Whitworth Gallery and the Jodrell Bank Observatory. While library management asserts that a reduction in public access at Rylands will be matched with more support for external school programs and activities at its other sites, staff at Rylands say this misses the point.

Before the pandemic, the university welcomed upwards of 350,000 guests to exhibitions of its internationally renowned collections of rare books, archives and manuscripts, including St John’s fragment — generally considered the oldest known biblical text from the New Testament on record.

The Rylands also ran programmes pre-pandemic aiming to engage families and young children with the historic building conducting child-friendly tours, storytelling groups and music performances. During the pandemic, the library utilised social media to run virtual tours of the building and stream craft activities for children.

Rylands staff told The Meteor the restructure may “edge out opportunities for families” in pursuit of a research-oriented agenda. Jude* is on the Visitor Engagement team at Rylands but has to reapply for her job. She fears the plan is de-prioritising families and public access.

“Our key target audience up until a couple of months ago was families. We’ve been thinking of ways to engage local families, to get them in the building, enjoying the space, the history and the connections we have. We’ve been told that’s no longer the focus.

“It feels like management is pitting the public access and engagement against research, as if the two can’t now work in tandem,” Jude says. “Now one has to come at the expense of the other.”

Last year the Manchester university secured over £265 million of research funding, a significant proportion of which came from the Research Excellence Framework (REF). Funding is often prioritised to research providing ‘impact case studies’ showing how academic work engages with the public. However, the REF has been criticised for penalising research that has less perceived ‘economic impact’.

For Jude, the pivot and dogged pursuit of REF funding will change the Rylands.

“It makes public engagement into more of a box-ticking exercise for this framework rather than a genuine method of increasing research impact. Getting kids into this space and enjoying being in a library is just as serious a issue, we see them as the researchers of tomorrow. The two can and should feed into each other.”

Local libraries in Greater Manchester have been hit hard by austerity, losing out on £19.4 million of funding in real terms. Libraries that have avoided closure have reduced opening hours and increasingly rely on volunteers to stay open.

Henry*, another staff member, feels a responsibility to keep the Rylands open and engaging to everyone.

“It’s a very beautiful building but it’s also a centre of learning and research, so can seem quite imposing — even formidable. Looking from the outside, passers-by often wonder if it’s a church, whether it’s generally accessible, whether it’s a place that they can visit or might enjoy.

“The very popular public programme, developed in recent years by the Visitor Engagement team, has broken down barriers and welcomed people from all backgrounds, enabling us to share the library’s treasures and the stories within,” Henry says. “The library has become an essential part of the city of Manchester’s offer and a source of great pride to the whole community. Those of us lucky enough to work in the building share that pride.”

“But the move away from a broad programme of activities for the general public could well undermine all the good work that has been done in making the library so accessible and relevant to all.”

*Not their real names.