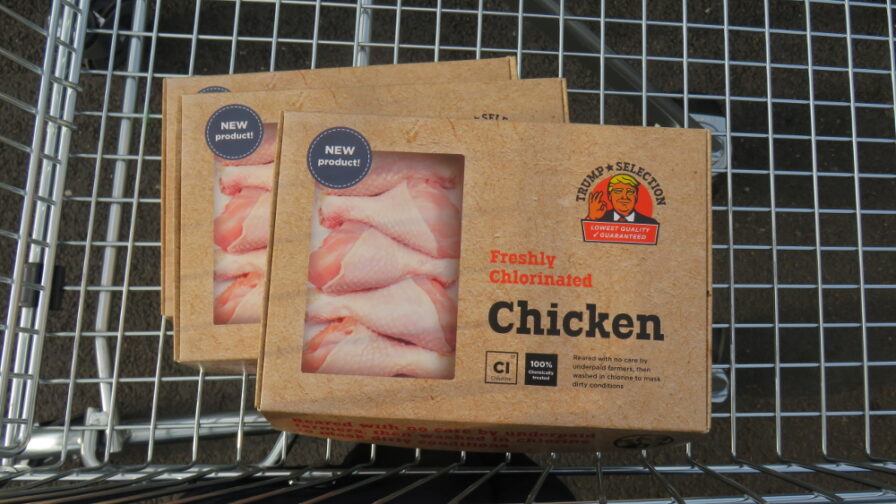 The UK and US trade deal negotiations are still underway, aiming to be finished for the end of the Brexit transition period with the EU in December.

Campaigners in Manchester are determined to oppose the introduction of chlorinated chicken and continue the fight for the UK to keep its higher standards in farming and food production.

The coronavirus lockdown could lead to our coronation chicken being served up with chlorinated poulty unless we keep up the pressure on government to maintain high EU level standards for farming, food and the environment. The media agenda is dominated by the pandemic, and government decisions outside of the viral crisis are being poorly scrutinized, providing plenty of opportunities for burying bad news regarding trade deals with the US.

Our campaigns in Manchester to highlight the potential dangers present in lowering our standards to allow increased trade with the US have been hindered, but not halted.

National and international attention is understandably focused on combatting the pandemic. However another threat to life as we know it is quietly becoming more likely with every passing day.

The governments contradictory messaging about Covid-19, has been matched by their equally confused communiques on international trade when the Brexit transition period comes to an end on 31 December.  EU members have argued for extension due to preoccupation with the virus, sickness and lack of negotiations. The UK government has not agreed to an extension and must do so before July.

All quiet on the Transatlantic Front

In the eager talks between Boris Johnson’s and Donald Trump’s governments, both are keen to establish success, or something that can be spun as such.  Yet no word comes that these negotiations have been shelved, perhaps because of the threat Breixt supporters would feel betrayed and this would be failing to “get it done”.

The silence is thunderous, maybe portending a last minute demand for agreement. It is likely that government will portray any opposition to their trade plans as irresponsible wrecking at a time of national crisis due to the pandemic.  After critical months when the opposition have appeared ineffective, parliament has been sent home and will return with a lot on their plate. The pandemic and complaints about lack of preparation, testing and PPE offer a good time to bury bad news and avoid challenges on trade deal discussions.

Prime amongst the trade deal issues is America’s “chlorinated chicken”- the notorious washing of industrially killed chicken in chemicals to render them “safe” and compensate for lower hygiene and animal welfare standards where E coli, campylobacter and Salmonella are several times more frequently found on carcasses’, reflecting different sanitary and phytosanitary conditions. Workers are also abused in the American poulty industry and are reported as being denied “bathroom breaks” to increase profit

A lot of the chemically washing by the American poultry industry uses lactic acids rather than chlorine. However both chemical processes cover for the poor animal welfare and hygiene standards before they are slaughtered. Conflicting messages from UK ministers and US lobbyists and negotiators- designed to reassure consumers and industry in their respective countries- have confused the publics’ grasp of the issues involved. The UK government has failed to commit to high food standards in the upcoming trade deal, whilst the EU has been pressed by the US to change, what they describe as,  old fashioned and unscientific standards,  arguing they unfairly prohibit US product that are safe.

American farming and food productionprocesses produce meat 21% cheaper- undercutting UK poultry producers, leading to Unite the Union saying a decrease in standards in any trade deal could “threaten jobs” in UK. Some affluent shoppers may chose more expensive options,  but worries about loss of distinctive labeling, which is also under discussion in trade negotiations, will hamper discerning shopping.  Processed food producers are likely to go with the cheaper option to compete.

Whatever the outcome on chicken, the wider issues of genetically engineered/ modified foodstuffs,  the routine treatment of animals with antibiotics and hormones to speed and guarantee meat production and use of pesticides leaving residues, remain key differences between US and EU. These different standards and are not unique to America. Australian agribusiness is also pushing for acceptance of their Hormonal growth promotants (HGPs)- used in cattle to accelerate weight gain.

When the food security of the UK is increasingly under threat due to the coronavirus crisis, a trade deal that undermines British producers and the higher standards they are geared up to produce, will further undermine our domestic food production.

A new world order in food

Global Justice Now (formerly called World Development Movement) has long campaigned on food, initially promoting the precursor to fair trade tea.  More recently it campaigned to regulate speculation in foodstuffs, promoting food-sovereignty- where communities are guaranteed choice and responsibility in what is grown, how it is grown and who grows it- avoiding the scandal of local producers being forced out of farming by alien business muscle and dependency on big business supermarkets.

Mindful of these dangers Global Justice Manchester, War on Want and Greater Manchester Trade Action members have been raising awareness with letters in the M.E.N. and speaking at activist meetings.  Some, prior to the lockdown, engaged the public by covertly placing packaging for a spoof “Trump Selection” on supermarket shelves.

Displaying the slogan “Lowest Quality Guaranteed” they consist of boxes for Chlorinated Chicken and “Veggies and Rice a la Trump” which boast “with traces of arsenic and pesticides to make your baby grow stronger”.

During the winter actions have taken place in Gorton, Longsight, Fallowfield, Burnage, Chorlton, Withington, and the city centre.  The “lockdown” has however now frustrated rolling this out further, though before restrictions were tightened shoppers at Parrs Wood Tesco may have been surprised to see a familiar face offering help in a spirit of international solidarity.

Campaigners are now concerned that local politicians and MPs have forgotten their stated concerns that were  championed by Barry Gardiner when Labour’s shadow Trade Secretary which were being pushed as “trade democracy” amendments to the pre-General Election Brexit legislation.  They demanded accountability, with parliament debating and mandating areas for trade negotiations,  and for parliament to be updated on progress in talks often and transparently. Global Justice Now’s national director Nick Dearden has commented:

“Trade deals today create public policy. They change the lives of each and every one of us. And therefore it’s totally wrong that these things are negotiated in total secrecy, without any legitimate accountability to parliament….The government’s barrister admitted to 18 sets of trade talks that we knew had been happening, but also that there have been additional trade talks whose existence remains confidential.”

Going organic or vegan won’t enable you to avoid the tentacles of such trade deals.  Second only to the issue of food have been concerns that US health businesses want to muscle in further on the NHS. The UK governments plan to introduce a digital services tax to claw back some of the billions in avoided tax by immensely wealthy tech giants such as Google and Amazon, is also under threat due to trade talks pressure from the US.

Jeff Bezos’s online retail company has been fêted by Andy Burnham, Liam Fox, Manchester City Council and the M.E.N. for bringing hundreds of jobs to Manchester, both in warehousing at the Airport and also for professionals in the old Co-op Hannover Building opposite Victoria Station. Allegations of worker exploitation, demands for overtime at Amazon’s convenience and poor health and safety procedures have dogged their distribution centres to which job-seekers have been regularly directed.

In the increasingly networked digital world data relating to internet searches and clicks is harvested and monetized. Could the higher data protection provided by European derived GDPR regulations be under threat by these talks?  There are also concerns about the sale of obliquely discerned health data- could some be unable to get affordable insurance or face discrimination due to leaks of this data?

The Department for Health and Social Care has sold millions of health records to American and international drugs companies and US negotiators are demanding this continues (valued at £10bn annually) in a trade deal. The NHS may be transformed into a cash cow, reduced to a first-aid service, picking up the problems while corporate care cherry picks the most profitable parts.

There are other issues under threat including climate action, pharmaceuticals, extractive industries, fossil fuels and environmental degradation.  So despite the hamstringing of campaigning, Global Justice Manchester and GM Trade Action continue campaigning against trade deals which will create more problems than they solve.

Stephen Pennells is a campaigning member of Global Justice Manchester

To find out more and take action – click here

All images provided by Stephen Pennells