Does the Mayfield proposal offer the radical change Manchester desperately needs or will the city be left unsatisfied? 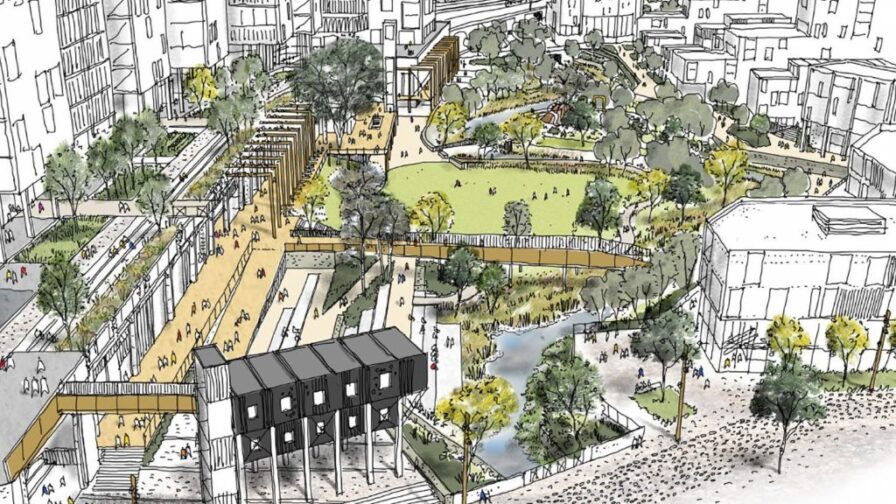 Plans to rejuvenate the derelict Mayfield Depot offers a glimpse of hope for the city centre with promises of new homes, offices and a park to boot. But there are fears that the average resident could be priced out of the space and the green measures promised do not go far enough to protect the planet.

Manchester Labour for a Green New Deal argues that Manchester city council’s plan to develop Mayfield Depot, while welcome, must be the starting point, rather than the end, of a programme of measures to democratise the local economy and green the city.

This month, it was reported the government would contribute millions to fund Manchester’s first city centre park in 100 years. The plans to develop the derelict Mayfield Depot include new housing, offices and a park to boot. However, the lack of affordable housing commitments, the lack of clarity around the exact proposed ownership model of the parklands and the lack of substantial investment in green infrastructure raise questions over the environmental, economic and social effects the project will have. While welcome, the current climate and economic crises do not afford us the luxury of time to implement half-baked non-solutions such as the plan put forward.

First, the development is a prime example of Manchester city council sending mixed messages on the climate emergency, environmental in its aspirations while proposing very few measures to match that aspiration. The Mayfield Depot has possibly the greatest transport connectivity in Greater Manchester, with access to buses, Metrolink, regional and national rail services, cycling routes and taxis, as well as being walking distance from the city centre. In the words of the Mayfield Partnership which will develop the site, “Mayfield has the opportunity to be the most sustainable district in Manchester”.

In spite of this huge potential, the proposal includes plans to build a 581-space car park, with 60 electric vehicle charging ports. There are also plans for potential expansion of this car park and plans to build another car park 2km away in the already heavily polluted areas of Great Ancoats Street. In the Greater Manchester 2040 Transport Strategy, city leaders set an ambitious target for 50% of all journeys in the city region to be made on foot, by bike or using public transport by 2040.

If city leaders want more people to use public transport or active travel why would they tell people at the same time to park in the city? Continuing to support car culture after declaring a climate emergency last year, Manchester City Council ties its hands in reducing CO2 levels in the city by 2038. If we are serious about tackling climate change we must abandon our archaic car-centric approach to urban planning and instead incentivise the use of public transport to drive down traffic in the city centre.

The partnership also promises a sustainable city centre and rejuvenated local economies, but leaves open the possibility of the council backtracking to business as before by invoking “commercial viability”. On procurement, in its Strategic Regeneration Framework for the site, the partnership promises to adopt a “low embodied energy ethos”, with “materials selected to minimise embodied energy, to maximise recycled content as far as practicable, and with consideration of responsible sourcing.” We welcome this – building back greener requires we account for embodied carbon and energy use in the materials we use to build our city. The proposal contains some great measures on water usage strategies and energy hierarchies which will encourage sustainable, local living.

However, as is often the case when council bodies merely ‘consider’ social and environmental value during development, these measures will be jettisoned if too costly. One need only look at the lack of affordable housing being built in the city to know the council doesn’t have a great record on holding developers to account for inclusive development. Using the market to save the planet from climate breakdown is a flawed approach; if the plan hits the profit margin of a developer, it’s not worth it – at least not for their shareholders. We call on Manchester city council, along with developers, to make good on their green aspirations and become a national shining example of how a city can rebuild a run-down area of the city without compromising our futures.

Secondly, the Mayfield project promises new homes without guaranteeing accommodation for those most in need. There is a serious shortage of affordable housing in Manchester. Government figures reveal that Greater Manchester has recorded a loss of 47,000 social homes across Greater Manchester between 1997 and 2019.

This decline in affordable housing has caused a steady increase in rent prices. As of January 2020, average rent prices in Manchester for a one-bedroom apartment are £541.04 with this rising to £758.60 if renting in the city centre. These figures have been steadily increasing, with a rise of over 8% from December 2018 to December 2019 alone. This trend shows there is a desperate need for social housing in Manchester now more than ever, with the average family being priced out of properties and pushed into the privately rented sector, where horror stories abound of dodgy landlords renting out substandard homes at exorbitant rates.

The shortage in affordable housing in Manchester is clearly beyond doubt and yet neither Manchester city council nor the developers for this site have any intention to address this shortage. The partnership will utilise 24 acres of largely unused land to provide Manchester with 1,500 new homes which will be perfectly placed to take advantage of the transport links to other parts of the city and the rest of the UK.

However, when pushed on whether any of the 1,500 new homes would be affordable to those on housing benefit, Sir Richard Leese admitted they would not. And when pressed on whether homes for affluent professionals were really what Manchester needed, director of regeneration firm U+I which is part of the partnership which will develop the site, James Heather, dismissed it as a concern for developers. “Manchester needs to mature in terms of its offer”, Heather said. “You need more expensive houses and places for chief execs so that they can live in the city”. This disgraceful disdain for transforming life for those at the bottom disqualifies this scheme from Green New Deal politics.

Finally, while there are some good green measures in this proposal, it does not constitute a ‘green recovery’. The proposal to build a park is of course welcome. Moreover, announcing 11,000 environmentally sustainable homes is encouraging, as housing accounts for around 18% of the UK’s emissions. However, 80% of the UK’s homes in 2050 – the UK’s deadline for becoming zero carbon – have already been built. Even if every single new home we built therefore was zero carbon, we would still be a long way off meeting our emission reduction targets. Put simply, the green measures put forward are welcome but incommensurate to the scale and urgency of the climate crisis. We call on local authorities to follow through on their commitments to a green recovery and commit seriously to a retrofit programme for Greater Manchester.

On the surface, the proposal has all the signs of a progressive project. The pretty rendering is sure to get the people of Manchester excited at the prospect of this shiny new haven in the middle of their bustling city; with the steady deterioration of Piccadilly Gardens, many will overlook the still unknown costs of Mayfield, instead focusing on the quasi-rainforest on offer.

What we need now are radical changes. We should seek out forward-thinking organisations putting forward bold approaches to rebuilding our city. One example would be Ignition – championed by Mayor Andy Burnham – and its five capitals approach. For a project such as this, the bare minimum would take into account human, natural and social capital; natural capital to guarantee structures built using renewable materials sourced as locally as possible; human capital to ensure skilled workers create and implement ideas which are exciting and sustainable; and social capital to create communities who want to work together to incite and retain the change we need.

With these factors considered, a cycle of teaching, understanding and action could be born. Mayfield Park is an exciting opportunity to re-think what can be done with city spaces. It is just a case of using bold alternative approaches to realise economic and environmental transformation.

By Manchester Labour for a Green New Deal