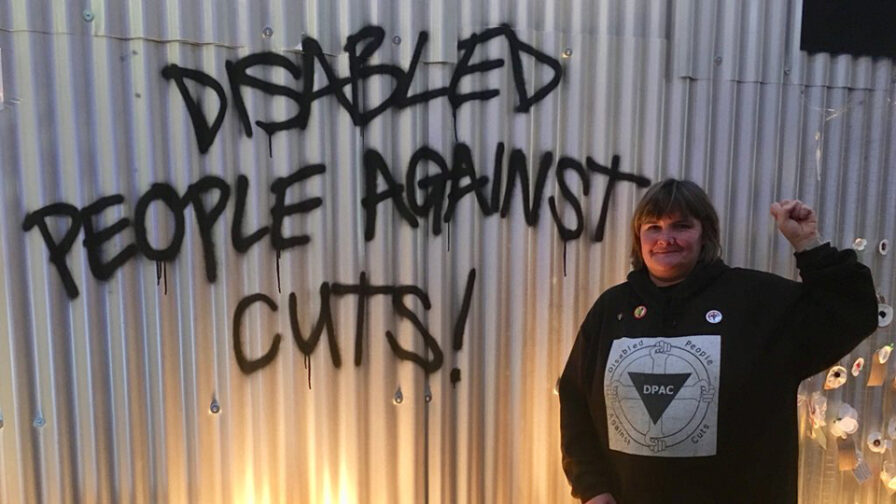 Disabled People Against Cuts (DPAC) are calling for Universal Credit (UC) to be stopped and scrapped due to its multiple flaws, and old welfare payments to be reinstated. This report covers DPAC’s talk at this years Lush Summit where they explained the devastating effect UC is having on people claiming it. DPAC’s #StopAndScrap Universal Credit campaign is holding a national day of action on 18 April – Manchester DPAC will be campaigning in St Peter’s Square between 1pm and 3pm:

Disabled People Against Cuts (DPAC) is a grassroots campaign group set up in 2010 to oppose the austerity driven cuts that were going to negatively affect disabled people’s lives. Their battle has been made all the harder by the demonising terms, such as “scroungers” and “workshy”, used to refer to social security claimants by the right wing mainstream media and certain politicians. Their current campaign against Universal Credit (UC) doesn’t just concern the disabled; once rolled out fully it will affect millions of part-time low paid workers, who will have to prove they are looking for extra hours or be subject to sanctions if they don’t.

Paula Peters from the national steering group for DPAC was joined on the Lush Summit 2018 Human Rights stage by her colleague Keith Walker from Bromley DPAC. Peters talked of the major problems facing the new method of social security payment which rolls six existing benefits into one monthly UC payment. The official five week waiting time to receive UC after making a claim has received criticism from many individuals and organisations concerned about increased debt, poverty and homelessness, but many people have to wait much longer, says Peters. “We have had disabled people come to us, who have not had their claims processed for 10 months, left with no money”.

Over £15.8 billion has been spent so far on implementing Universal Credit, “on a train wreck of a computer system and administration that are showing Universal Credit simply isn’t working” according to Peters, who went on to describe the losses some disabled people would see:

“Disabled people are going to be placed further into poverty by cuts to the Severe Disability Allowance. Single disabled people will lose £2,000 pounds a year, over £40 a week, couples £4,000 a year.”

But it is not just the disabled or the unemployed that will be affected by UC. Millions of low paid part-time workers claiming tax credits, one of the benefits being rolled in to UC, will be affected. People working under 32 hours a week will now have fill in a Claimant Commitment form which will detail what they will do to increase their hours of work. If they fail to comply with this commitment they can have their UC sanctioned (meaning they will receive no money) for a minimum of one week and up to a maximum of three years. Sanctions are often issued in error and many are successfully overturned when appealed, but that can take a long time while the claimant has to live on reduced or no money. A Work and Pensions Select Committee report described sanctions as “purely punitive” and not aimed at helping people secure work. Peters says the rate of people being sanctioned has tripled since UC came in and told the story of a mother of two working part-time in Sainsbury’s, who also claimed housing benefit, who was sanctioned:

“She was told you have to increase your hours at Sainsbury’s. She strived for three years to get more hours. Her job fits round her children, picking them up and taking them to school, she can’t get another job that fits around the kids’ school day. The DWP sanctioned her right off the bat for six months with no money. She lost her home and because she had nowhere, social services then got involved and took her children into care.”

Walker urged the audience to check out DPAC’s website which contains lots of information regarding austerity’s effects on the disabled and contains a comprehensive statement on DPAC’s stance towards UC.

“Universal Credit is about denying you the support you need, causing maximum distress and harm and making sure your payments drop…[It] is conscious cruelty with punitive sanctions… at the heart of it”, said Peters, who went on to ask everyone to oppose the demonising rhetoric spouted by politicians and the right wing media, and asked them to “take this away, get angry and get active.”